An unlikely group of MPs from across the political spectrum are calling for a major expansion of Australia's community-sponsored refugee intake.

Three federal MPs - from Labor, the Liberals and Nationals - have banded together to support a radical expansion of Australia's privately-sponsored refugee intake.

Labor's Tim Watts on Monday night introduced a bill pushing for the existing 1,000 places each year to be expanded.

He found an ally in Nationals MP Andrew Broad, who wants to see the scheme expanded ten-fold, to 10,000 places.

Those places would be in addition to the roughly 16,000 that will be accepted in the regular humanitarian intake this year.

"I think when you have people come from refugee camps, and are integrated into Australian society, and then are employed and contribute to our gross domestic product, you have every Australian saying 'that's how immigration should work'," Mr Broad said.

Mr Broad said he has seen the economic revival refugees can bring to country towns, citing the example of Nhill, Victoria, within his own electorate.

Around 150 members of the Karen ethnic minority, from Myanmar, settled in Nhill, with many taking up jobs in local duck abbatoirs and reviving a struggling economy.

"The Karen in Nhill have contributed $41 million to the economy," Mr Broad said.

"So it's created opportunities for Australians as well as being a good example of the integration of people from refugee camps." 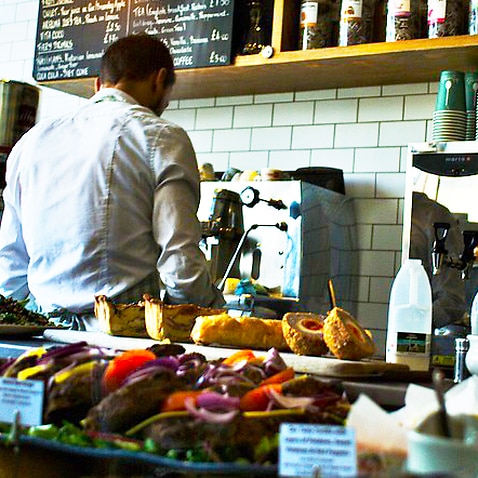 The community sponsorship model allows businesses, as well as community groups like churches, individuals, and families, to front the cost of resettling a refugee.

Mr Watts said an expansion of community sponsorship could allow thousands more refugees to come to Australia without straining the Budget.

"I think this is a real win-win model," he said.

"Because it lets communities dictate their contribution. If communities believe they benefit more from the program, they can try and sponsor more people... it gives them a stake in this debate and a say in what they're doing."

Liberal senator Chris Back said many refugees who came from rural areas in their home countries settled more quickly in the safety of small Australian country towns.

"If there are people of the level of generosity who are willing to sponsor groups of refugees... I think this is a wonderful concept," he told reporters.

Government MP Jane Prentice said Australia was one of the most generous countries in the world when it came to accepting refugees.

"Clearly none of us want to see anyone in detention so I'm sure that's under consideration," she told reporters.

The community sponsorship program was only expanded from a small pilot to a permanent 1,000 places in the Budget earlier this month, as first reported by SBS News. One in 16 refugees to be paid for by private sponsors

The move was inspired by a similar program in Canada, which has been running since the late 1970s and has seen around 275,000 refugees resettled through private sponsorship.

When contacted by SBS World News, the Immigration Department was unwilling to comment on the idea of boosting the relatively new scheme to 10,000 places.