Factory workers chanted slogans, students and pensioners took to the streets, and police detained at least 235 people on Monday as the Belarusian opposition sought to intensify pressure on veteran leader Alexander Lukashenko with a nationwide strike.

Mr Lukashenko defied an ultimatum to surrender power by midnight, challenging his opponents to carry out a threat to paralyse the country with strikes, nearly three months after his disputed election victory unleashed mass protests.

If sustained, the strikes could open a new phase in the crisis, testing whether the opposition has the mass support it needs to bring enterprises across the country of 9.5 million people to a halt. The opposition has mounted strikes at state-run factories previously, but they were not sustained. Belarusian media reported groups of strikers at many major state-controlled enterprises. However, the prime minister’s spokeswoman said all the major industrial companies were working normally.

Many shops, cafes and restaurants were closed in central Minsk. Hundreds of university students took to the streets in the capital, clapping and chanting as passing cars tooted their horns in support.

A crowd of around 2,000-3,000 marched down a main street waving red and white flags and protest signs.

Elsewhere in Minsk, black-clad officers in masks poured out of vans, detaining people and dragging them away, footage from news website Tut.by showed. Belarusian opposition leader Sviatlana Tsikhanouskaya speaks during a protest against the political situation in Belarus.
EPA

By evening, small protests continued in a dozen districts of Minsk as protesters formed roadside human chains and stood in the road to block traffic. Unidentified men shot at human chains in two places with paintball guns, Tut.by reported.

The Vesna-96 rights group said police had detained 235 people across the country on Monday.

The KGB security service warned protesters that extremist actions may be treated as terrorism. The central bank said that a DDoS cyber attack knocked its website offline for two and a half hours.

Mr Lukashenko has scoffed, asking: “Who will feed the kids?” 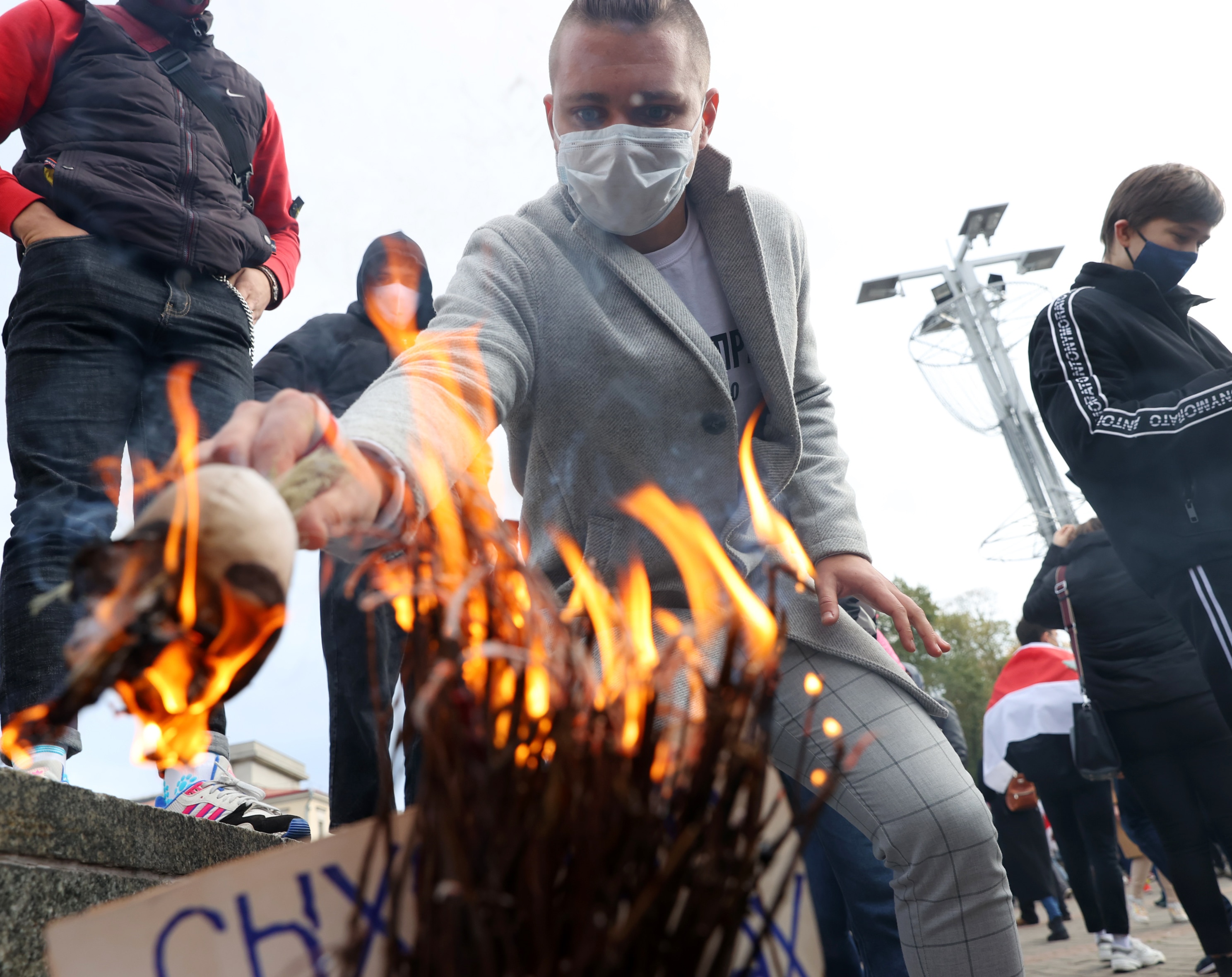 A Belarusian opposition supporter takes part in a rally in central Minsk.
TASS

Official media said Mr Lukashenko was at work as normal on Monday and that he had a busy working week ahead of him.

Ms Tsikhanouskaya praised workers and others for the strike action a day after police fired stun grenades and detained scores of people at nationwide protests by tens of thousands, the 11th straight weekend of rallies.

“The protest will only be over once we have achieved our goal. We stand together, we are many and we are ready to go until victory,” she said in a statement.

If strikes come close to paralysing the country, it could be a further test of Russian support for its ally Mr Lukashenko. Belarus threatens to fire on protesters as police use tear gas, stun grenades against pensioners

Since the crisis began, Moscow has backed him with a $2.1 billion loan and increased security cooperation.

Official results showed Mr Lukashenko won a landslide election victory on 9 August, but the opposition and Western countries say the vote was rigged, which he denies.

More than 15,000 people have since been arrested during a crackdown on mass demonstrations. Nearly all opposition leaders fled or were jailed.