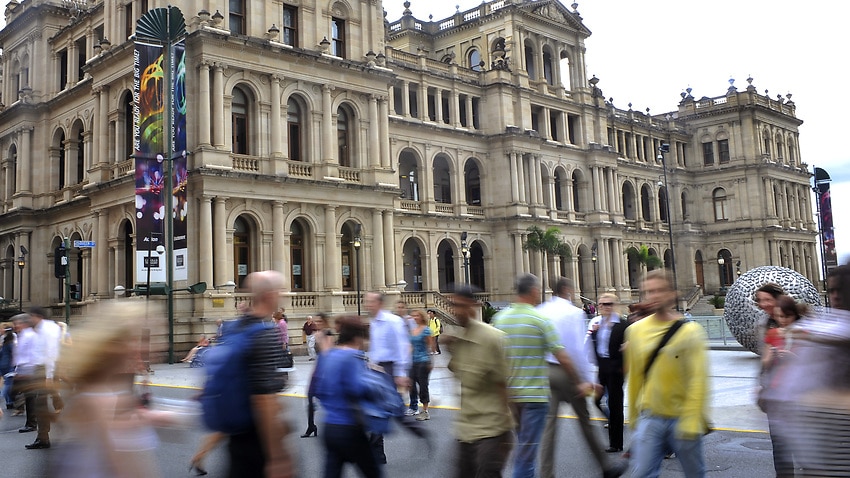 When people were asked about negative attitudes towards different faith groups, 21 to 25 per cent of those interviewed said they held negative views about Muslims, but the rate in the self-completion survey was almost double at 40 per cent.

In 2018, asked whether they felt positive, negative or neutral towards Muslims, 23 per cent of those polled said they felt ‘very negative’ or ‘somewhat negative’, increasing to 39 per cent when answering anonymously. Results were similar in 2017.

Members of the Muslim community at Lakemba Mosque in Sydney. Source: AAP

Professor Andrew Markus from Monash University in Melbourne is the report's author.

"The finding on Muslim Australians and that big difference was not a surprise the first time we did it. But we have now done it three times at 2017, 2018, 2019 and basically obtained the same result. So that level of difference is quite unusual," he told SBS News.

“If I look at the self-completion survey for the other groups, Christians, Buddhists, Hindus, it's in the range of five to 10 per cent ... but the Muslim figure is four times that level at 40 per cent."

There were a total of 3,500 respondents to the survey - 1,500 via telephone interviews and 2,000 via the self-completion survey, which asks some 90 questions. All participants are anonymous.

Professor Markus said the result around attitudes towards Muslims indicated an underlying concern with some topics that people are reluctant to disclose if they are talking to an interviewer.

“We need to make sure that there are policies and social cohesion programs in place that facilitate a meeting between people so they understand each other's differences, each other's faiths, each other's cultures."

Since 2011, the survey has also sought to determine the issues that are of greatest concern in the community, asking the open-ended question: 'What do you think is the most important problem facing Australia today?'

Professor Markus said the movement of an issue from quite far down in the middle of the list to ranking second is unusual in the history of the survey.

"In the past, 2010 to 2011, there were a lot of people indicating that what they were concerned about was that people talking about climate change was overblown. There was too much of it, they didn't believe it, they were sceptical," he said.

"And 2019, almost no one is indicating that they are concerned because the issue is being overblown."

Nearly half of those aged 18-24 reported being the most concerned about climate change, with much smaller rates seen in those over 65.

Hamsa Farah is one young Australian who sees climate change as one of the most pressing issues affecting Australia today.

The 23-year-old has a professional interest in the area, completing a Masters in Environmental studies and working as a sustainability advisor, but he also said he felt personally affected by the issue.

"I am trying to go to as many natural and beautiful landscapes that we still have while we still have them and try and create those memories with families and friends prior to losing them to these catastrophic impacts," he said.

Mr Farah believes politicians should do more to respond to public concerns about climate change.

Immigration good for the economy

Professor Markus said the survey shows high, positive results on questions about the economic benefits of immigration and whether it is good that immigrants bring new ideas and cultures, with between 75 and 85 per cent agreeing it's a good thing for Australia to have immigration.

But, he said, the results are less favourable on other immigration-related issues.

"When we ask people 'do you think that the government is managing population growth well and are you concerned that immigration has got an impact of quality of life on overcrowding, on house prices, on the environment?' ... What we're picking up is in the self-completion survey is 60 per cent or more of people are indicating concern," he said.

The survey found concern about the level of immigration marginally declined from 43 per cent in 2018 to 41 per cent this year, with 53 per cent saying the intake is about right or too low.

The Scanlon Foundation said less concern about immigration levels has been found in three other 2019 surveys with a similarly worded question, including a Lowy Institute poll finding those of the view that the intake was ‘too high’ fell from 54 per cent in 2018 to 47 per cent this year.

Hass Dellal, the executive director of the Multicultural Foundation and the chairman of SBS, said the discussion around immigration had become better informed.

"I think there has been some excellent research, particularly the Deloitte one with SBS where we actually showed the economic benefits of social cohesion. I think people get a better understanding of the values of not only the economic contributions and factors around immigration but also the benefits into social cohesion," he said.

Read More
How social inclusion could boost Australia's economy by $12.7 billion a year

“A lot of the media are now being able to tell the stories of families and narratives of migrants and the contributions they make. I think there is a much more informed sense of understanding of immigration and I think that helps with that acceptance."

On the issue of happiness, 84 per cent of respondents said they had been 'very happy' or 'happy' over the past year, but there has been a steady increase in levels of pessimism since the survey began with youngest people reporting the highest rates, increasing 10 per cent since 2007.