A university survey shows the majority of Asian-Australian respondents experienced more discrimination this year than in 2019 and they were more likely to have work hours cut. 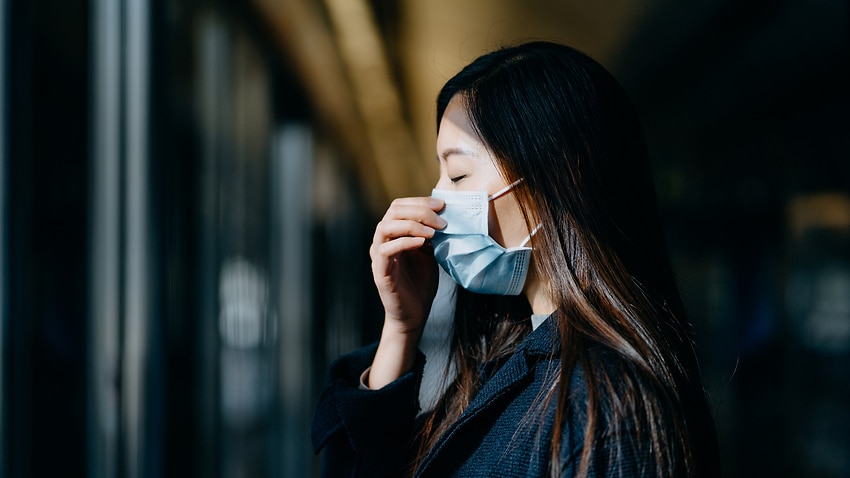 Asian Australians were more likely to report feelings of worry and anxiety due to COVID-19. Source: Getty

Y-Anh LePham was walking her dog on a Melbourne street last month when she experienced racism for the first time in her local community.

"As I was approaching them, I could hear them saying things like, oh look at that, they ruined our country," she said.

"You know it's all their fault, they are saying it to each other, but I feel like they tried to say it so I could hear it," Ms LePham said

"Not having a quiet conversation, it's more like I'm just putting it out there," the university research assistant said.

She said she's never faced racism in her neighbourhood of Kensington before, but when the pair made a reference to Chinese people, Ms LePham - who was born in Vietnam - felt the need to correct their error.

"So I stopped and said, if you're going to be racist about it, you at least need to get my ethnicity right," she said.

"I told them you really need to grow up, it's not acceptable anymore to be like this."

After she called out the pair - who laughed in response - she shared her encounter online and noticed others were reporting similar stories.

A new survey from ANU shows more than 80 per cent of Asian-Australian respondents reported an instance of discrimination between January and October this year.

Study co-author Professor Nicholas Biddle from the ANU Centre for Social Research Methods said the discrimination tended to happened in public places such as queues at shops.

"Asian-Australians report where experiences of discrimination are most likely to occur and that's in shops and restaurants, so kind of interacting with the general population," Professor Biddle said.

He said the entire population needs to be responsible for taking a stand against racism.

The study suggested there have been some improvements in social cohesion during the coronavirus pandemic.

And while the findings showed a small drop in support for migration, that decline wasn't targeted towards a particular ethnic group.

The research indicated Asian-Australians have higher levels of anxiety and worry because of the coronavirus pandemic, compared to the rest of the population.

Mr Lo said some of the Asian-Australian community were already anxious about a rise in racism and xenophobia from earlier in the year.

"Over 65 per cent of the Australian population has a high level of trust towards Asian-Australians," he said.

"And I think a lot of that has to do with how Asian Australians were quite cautious about the pandemic from the very start."

The coronavirus pandemic has not only harmed the Asian-Australian population in terms of discrimination but more employees had their work hours disappear.

The research showed a greater reduction of work hours for Asian-Australians, who lost an average of five hours a week compared to others, who lost almost two and a half hours on average.

Mr Lo attributed this to the industries employing Asian-Australians being harder hit by the pandemic, such as hospitality and retail.

"Discrimination at workplaces still remains quite high," he said.

"Unfortunately, because of the pandemic we've seen heightened rates of discrimination directed towards Asian-Australians, which is another added complication for them in the work place," Mr Lo said.

Mr Lo said the results of the research send a strong message to governments that discrimination was a very real issue.

"What this research shows and what the message that this research sends is that governments and policy-makers need to take urgent action to ensure a large part of our population and community are not left behind," he said.

Professor Nicholas Biddle said it was crucial to monitor the overall labour market.

"Another aspect of the disruption of the Australian-Asian population is the concentration in urban areas and we know that the pandemic has particularly impacted on the urban labour markets," he said.