New York City's coronavirus death toll has exceeded that of the 9/11 attacks, with a dramatic increase over the past three days. 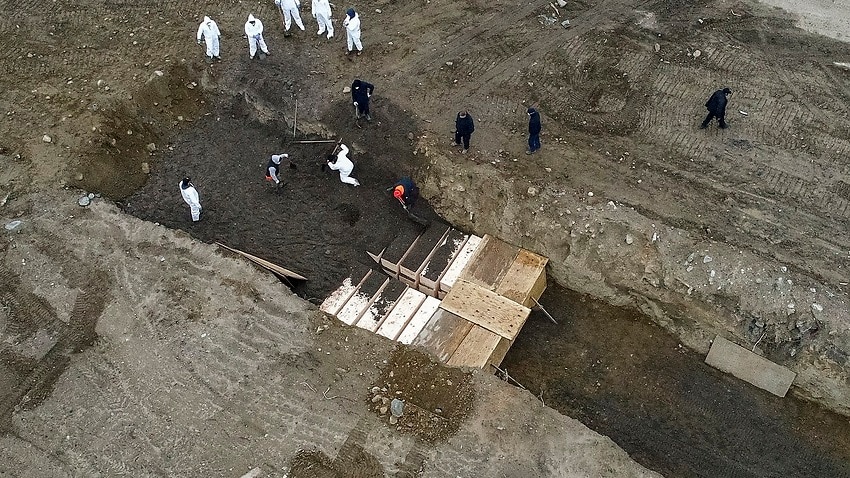 New York City officials have hired contract labourers to bury the dead in its potter’s field on Hart Island as the city’s daily death rate from the coronavirus epidemic has reached grim new records in each of the last three days.

The city has used Hart Island to bury New Yorkers with no known next of kin or whose family are unable to arrange a funeral since the 19th century.

Typically, some 25 bodies are interred each week by low-paid jail inmates working on the island, which sits off the east shore of the city’s Bronx borough and is accessible only by boat.

That number began increasing in March as the new coronavirus spread rapidly, making New York the epicenter of the global pandemic.

There are about two dozen bodies a day, five days a week buried on the island, said Jason Kersten, a spokesman for the Department of Correction, which oversees the burials.

Before burial, the dead are wrapped in body bags and placed inside pine caskets. The deceased’s name is scrawled in large letters on each casket, which helps should a body need to be disinterred later. They are buried in long narrow trenches excavated by digging machines.

Read More
'Every day is the hardest day,' New York nurse fears for COVID-19 patients, her own safety

“They added two new trenches in case we need them,” Kersten said. To help with the surge, and amid an outbreak of the COVID-19 respiratory illness caused by the virus at the city’s main jail, contract labourers have been hired, he said.

“For social distancing and safety reasons, city-sentenced people in custody are not assisting in burials for the duration of the pandemic,” Kersten said.

A barge could be seen arriving at the island on Thursday morning with a refrigerated truck aboard containing about two dozen bodies.

The department referred questions about causes of death to the city’s Office of the Chief Medical Examiner (OCME). Aja Worthy-Davis, a spokeswoman, said it would take time to collate individual causes of death from the office’s records, but it was probable some of the recent burials include those felled by the coronavirus.

The island may also be used as a site for temporary interments should deaths surge past the city’s morgue capacity, a point that has not yet been reached, Kersten and Worthy-Davis said.

"We’re all hoping it’s not coming to this," Kersten said. "At the same time, we’re prepared if it does."

OCME can store about 800 to 900 bodies in its buildings, and has room to store about 4,000 bodies in some 40 refrigerated trucks it can dispatch around the city to hospitals, which typically have only small morgues, Worthy-Davis said.

Another island to the south of Hart, Randall’s Island in the East River, is being used as a parking depot for dozens of empty refrigerated trucks between deployments outside city hospitals.

On Thursday, two trucks containing bodies that had been parked outside a hospital were temporarily moved back to the island depot, in a stadium parking lot, to make way for a delivery of oxygen and other supplies at the hospital.

"They will not stay there," Avery Cohen, a City Hall spokeswoman, wrote in an email.

City health officials could be seen on Thursday transferring bodies from the two trucks into three hearses dispatched by funeral homes.