'No lesser than any other': Australia marks unique Anzac Day amid coronavirus isolation 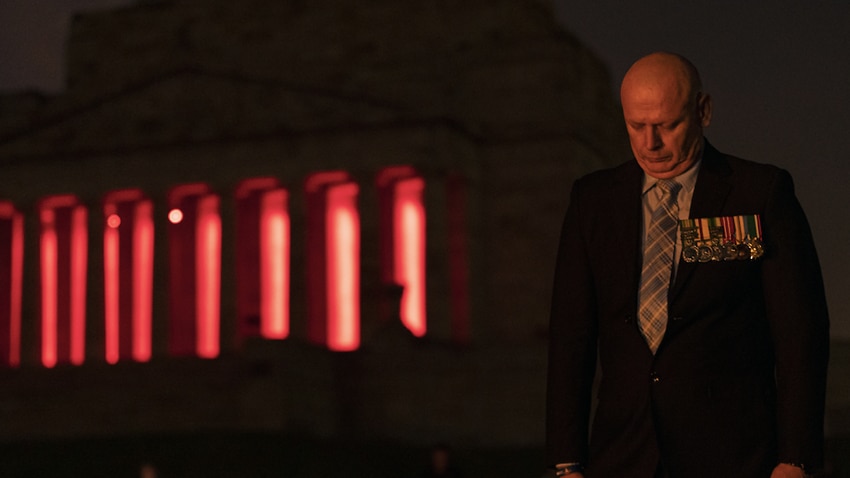 A man pays his respects during the Anzac Day Dawn Service at the Shrine of Remembrance in Melbourne, Saturday, April 25, 2020 Source: AAP

A far-from-traditional Anzac Day marked in isolation and in spirit has added new meaning to our most sacred day.

Private, individual and unique reflections replaced traditional ways to honour our defence personnel, past and present, for their service and sacrifice, courage and bravery.

A historic day marked under the shadow of the coronavirus pandemic, without the traditional public services, ceremonies and marches.

An Anzac Day commemorated individually around Australia and New Zealand, at the end of driveways, in front yards or inside homes at dawn.

Not a normal Anzac Day, but a moving one nonetheless.

"This Anzac Day is no lesser than any other," Melbourne's Shrine of Remembrance chief executive Dean Lee told AAP.

"There is little doubt that times of adversity, crisis causes us to reflect on ourselves, our relationships to each other and our community.

"For that reason, whilst coronavirus is not a war, it's probably the closest that many generations have come to understand what it must be to face a challenge that can be deadly."

Read More
On Anzac Day, there are calls to recognise the mental health impacts of military service

In fact, a grassroots campaign on social media to "light up the dawn" may have actually drawn more people than normal to commemorate the 105th anniversary of the Gallipoli landing.

There was no 35,000-strong crowd at the Australian War Memorial in Canberra like last year, yet its director Matt Anderson felt part of something greater during a unique national commemorative service.

"The fact that Australians chose their own ways to honour our Anzacs, past and present, has, I think, added new meaning to the day."

The Stone of Remembrance and the empty forecourt ahead of the Anzac Day commemorative service at the Australian War Memorial in Canberra. Source: SMH POOL

Standing alongside the memorial's roll of honour marking the names of 102,000 men and women who have died in service, Prime Minister Scott Morrison drew comparisons to Anzac Day in 1919.

Then, the Spanish flu pandemic meant there were no city marches or parades for the veterans returning from the Great War.

"Though our streets were empty, the returning veterans were not forgotten," Mr Morrison said.

Also on Anzac Day 1919, a small group of Anzacs who had been tending the graves of their mates gathered on the shores of Gallipoli.

"One said of that little service: it was 'the real thing'," Mr Morrison said.

"And so our remembrances today, small, quiet and homely, will be."

The only place in the world where Anzac Day went ahead in the traditional manner, untouched by coronavirus, was on Australia's small Antarctic research stations.

A memorial is seen on the front lawn of a Rydalmere resident in Sydney during the early hours of Anzac Day. Source: AAP

RSL national president Greg Melick believes this year's at-home commemorations and initiatives like light up the dawn will continue to inspire more people to honour veterans on future Anzac Days.

"I think this is going to lead to a lot more people doing something on Anzac Day and remembering those sacrifices, both past and present," Mr Melick told AAP after standing on the front verandah of his Tasmanian property at dawn.

"It was quite solemn.

"I think sometimes less can be more."

Retired service nurse Sharon Bown, whose great-uncle Private Albert Arthur Reader landed at Gallipoli 105 years ago, called on Australians to do more than just honour those who have defended Australia.

"In this time of crisis, let us realise the innate capacity within each of us to do the same - to unite and to protect the more vulnerable among us," she said.

"To realise that the qualities for which we honour the Anzacs live on in each of us - endurance, courage, ingenuity, good humour, mateship and devotion, to duty, to each other, to Australia."