Prime Minister Tony Abbott has ruled out resettling any of the thousands of refugees stranded at sea amid the Southeast Asia asylum seeker crisis.

Prime Minister Tony Abbott has ruled out resettling any of the thousands of refugees stranded at sea amid the Southeast Asia asylum seeker crisis.

"If you want to start a new life, you come through the front door, not through the back door," he said.

His view is at odds with the United States, which has vowed to help countries in the region bear the burden and will consider resettlement requests. Why are so many Rohingya migrants stranded at sea?

The Greens say Australia should be accepting thousands of Rohingya refugees.

Indonesia, Malaysia and Thailand agreed on Wednesday to end the dangerous game of "human ping-pong" and stop turning vessels away.

Instead, Indonesia and Malaysia will provide temporary shelter to the refugees as long as the international community provides resettlement within a year.

Nearly 3000 refugees have already swum to shore or have been rescued off the coast of the three countries over the past 10 days after a Thai crackdown disrupted long-established smuggling routes, prompting some to abandon their human cargoes at sea. 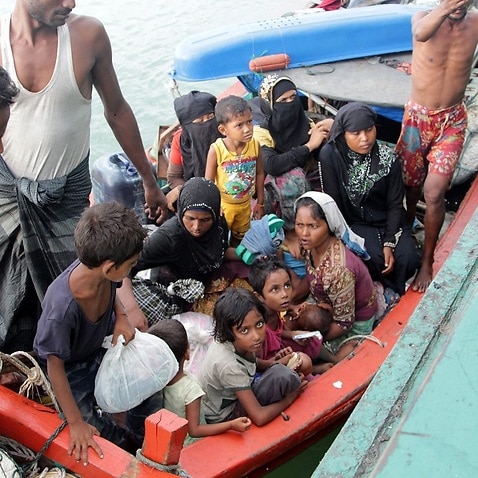 An estimated 7000 people are still on the boats. Representatives from 15 countries will meet late next week to discuss the next step. Australia is sending its ambassador for people-smuggling issues, Andrew Goledzinowski.

"We want to be a good neighbour to our friends and partners, and obviously if we are asked to help, we are happy to do so," Mr Abbott said.

That help could involve more aid money for humanitarian work within Myanmar (Burma).

The federal government has pledged $6 million for emergency food and shelter to Rohingya communities in Myanmar on top of a $10.7 million emergency aid package announced last week. Mr Abbott took a swipe at Myanmar over the crisis.

"The culprit is Burma because it is Burma where there is an issue," he said.

Rohingya Muslims are fleeing the country in droves because they do not have citizenship, suffer violence and discrimination, and have limited access to education and health care. Economic migrants from Bangladesh, who are trying to escape extreme poverty, are also on some of the boats.