The prime minister told reporters in Sydney the "reckless and dangerous regime puts the peace and stability of our region at risk".

Mr Turnbull said China has the leverage to influence North Korea, adding: "The eyes of the world are on Beijing."

Mr Pence characterised North Korea as an "urgent and most dangerous threat" to peace and security in the Asia Pacific.

"While all options are on the table, let me assure you the United States will continue to work closely with Australia, our other allies in the region and China to bring economic and diplomatic pressure to bear on the regime," he said.

He echoed Mr Turnbull's calls for China to play an active role in pressuring North Korea to abandon its nuclear and missile programs. 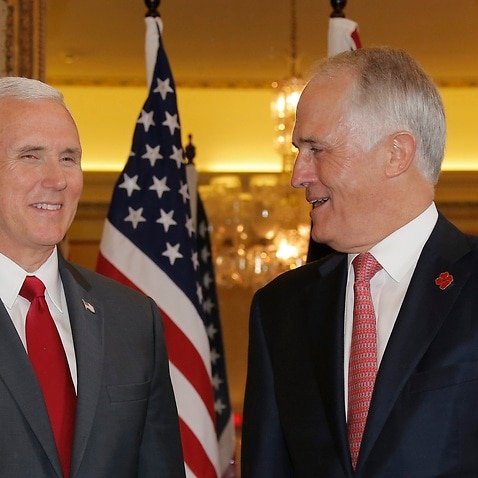 "If China is unable to deal with North Korea, the United States and our allies will. We know that our security is the foundation of our prosperity," he said.

Mr Pence also weighed into the controversy over claims the White House had been misleading about a US carrier strike group's push toward the Korean peninsula.

When US President Donald Trump boasted early last week that he had sent an "armada" as a warning to North Korea, the USS Carl Vinson strike group was still far from the Korean peninsula, and headed in the opposite direction.

Mr Pence said he anticipated USS Carl Vinson would be in the Sea of Japan in position in a matter of days.

"(What) the regime in North Korea should make no mistake about is that the United States has the resources, the personnel and the presence in this region of the world to see to our interests and to see to the security of those interests and our allies," Pence said.

Watch: US and Australia 'strong together'

Tensions between the US and North Korea have soared in recent weeks following a drumbeat of missile tests and fears that Pyongyang may be readying a sixth nuclear test.

Pence warned on Wednesday that the United States would counter any North Korean attack with an "overwhelming and effective" response.

His comments came a senior North Korean official warned the regime had no intention of scaling down its missile programme, pledging weekly tests and threatening "all-out war" if the US took any action against it.

The US Navy on April 8 said it was directing a naval strike group headed by the USS Carl Vinson aircraft carrier to "sail north" from waters off Singapore, as a "prudent measure" to deter the regime.