China has ordered North Korean companies in the country to shut down by January as it applies UN sanctions imposed following Pyongyang's sixth nuclear test, the commerce ministry said Thursday.

The ministry said the companies, including joint ventures with Chinese firms, have 120 days to close from the date the United Nations resolution was adopted, September 11.

The announcement comes days after China confirmed that it will apply another major part of the sanctions: a limit on exports of refined petroleum products to North Korea starting October 1 and a ban on textiles from its neighbour.

China's application of UN sanctions is particularly biting for North Korea. Beijing is Pyongyang's main ally and trading partner, responsible for around 90 percent of the hermit nation's commerce. The United States has pressed China to use its economic leverage to strongarm North Korea into giving up its nuclear ambitions.

Washington has alternated between criticising and praising Beijing's role in the North Korea crisis, on the one hand welcoming its support for new sanctions but also insisting it must do more to rein in its unruly neighbour.

For its part, China has called on both Trump and North Korean strongman Kim Jong-Un to tone down their increasingly bellicose rhetoric and instead try to begin peace talks.

"We are opposed to any war on the Korean peninsula, and the international community will never allow a war (which would) plunge people into an abyss of misery," foreign ministry spokesman Lu Kang told a regular press briefing.

"Sanctions and the promoting of talks are both the requirements of the UN Security Council. We should not overemphasise one aspect while ignoring the other," Lu said. 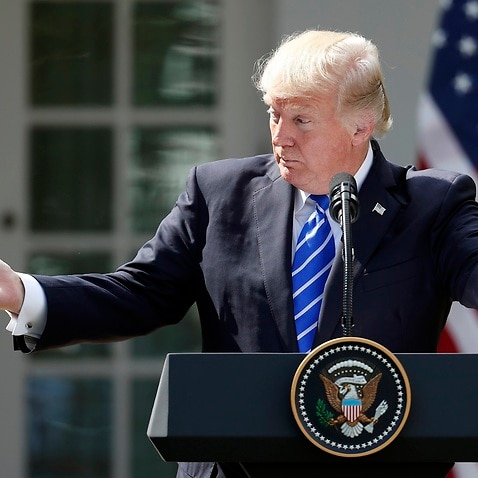 US warns North Korea's nuclear missile will be ready soon While China has imposed sanctions on its renegade neighbour, it wants to avoid precipitating the regime's downfall over fears that its collapse could send an influx of refugees across its border and place the US army at its doorstep.

But Beijing appears to be running out of patience with North Korea's nuclear antics -- the last test earlier this month triggered an earthquake that was felt in northeast China.

Branches of China's biggest banks have told AFP that they have suspended financial transactions for North Koreans, a measure that is not required under UN sanctions.