The RFS has warned the 1300-person town of Batlow in NSW "will not be defendable," ordering a complete evacuation before the fire is expected to hit on Friday.

Bushfire is expected to hit the 1300-strong township of Batlow as other NSW communities prepare for extreme conditions.

All people in the Snowy Valley town were ordered to leave by Thursday night, with the 130,000-hectare Dunns Road fire expected to hit on Friday afternoon.

Batlow - Wikipedia tells me it supplies 10% of the Australian apple crop. One of those little towns, unknown and unvisited by most of us, now facing potential catastrophe. pic.twitter.com/zFEHuCCAON

"The township will not be defendable," the RFS warned residents on Thursday.

"Embers from the fire may land in pine plantation adjacent to the township."

A similar message was issued for Khancoban, Greg Greg and Tooma, where fire is expected to hit on Saturday.

Friday marks the first day of a two-day statewide total fire ban and a week-long state of emergency.

Australia's apple capital of Batlow told their town ''will not be defendable'' when fire expected to hit it on Friday afternoon. Notwithstanding the human, emotional, animal, habitat devastation, these fires will have a huge economic hit. #AustraliaFires https://t.co/lW6Silq4IC

Holiday-makers in the alps and popular holiday destinations between Nowra and the Victorian border were asked to be out by Friday night, causing massive traffic queues and petrol shortages.

Police overnight were escorting 100 cars at a time on the Princes Highway from Milton to Nowra. Usually a 90-minute trip, the process was expected to take at least six hours.

One convoy was halted midway due to dangerous trees. 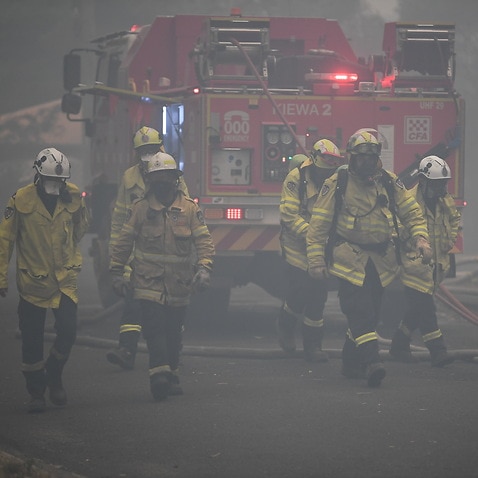 Very high fire danger is forecast for districts on or immediately west of the Great Dividing Range, while Saturday is expected to be severe or extreme across most of the state's southeast.

More than 100 fires are still burning across NSW, with many of the most dangerous in the southeast.

Premier Gladys Berejiklian on Thursday declared a week-long state of emergency from Friday until January 9.

"We don't take these decisions lightly," she said.

At first glance I thought this was a smoke stained renaissance master piece.
It's a photo of people evacuated from bushfires onto the beach at Malua Bay, NSW.

Payments of $1000 per adult and $400 per child can be claimed through the Department of Human Services. 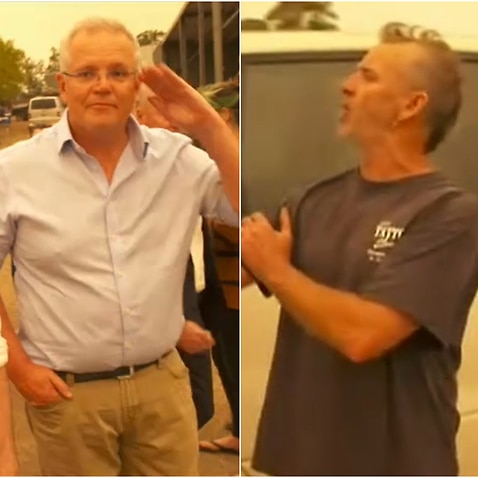 Approaching a woman with her right hand by her side, Mr Morrison reached down for her hand and shook it.

He walked off when she made her shaking his hand conditional on him giving more funding to the NSW Rural Fire Service. 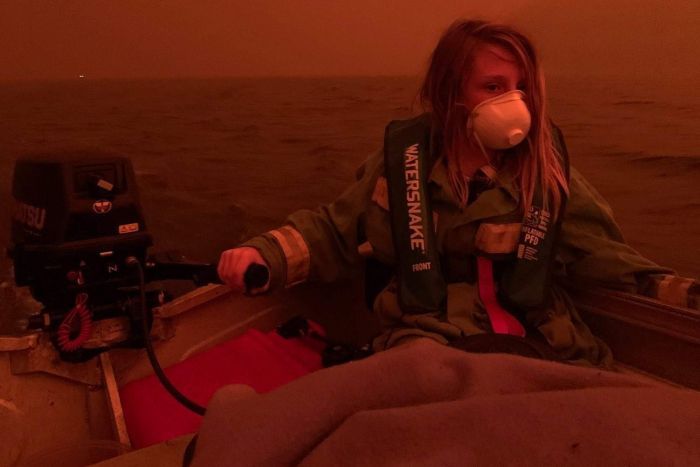 Allison Marion took this photo of her son Finn as they joined the exodus from Mallacoota.
Supplied

NSW had not requested military support for evacuations, such as those taking place in Mallacoota across the Victorian border, he said.

It was among more than 120 fires burning across NSW late on Thursday, with almost half of those blazes uncontrolled. 'We simply cannot guarantee your safety': Second death confirmed as Victoria declares a State of Disaster

Almost 20,000 people are still without power.

Fire crews in South Australia are bracing for a day of extreme fire-weather on Friday as traffic queues, blocked roads and fuel shortages hamper the mass evacuation of the nation's bushfire-ravaged southeast.

Fire crews in South Australia are bracing for a day of extreme fire-weather on Friday as traffic queues, blocked roads and fuel shortages hamper the mass evacuation of the nation's bushfire-ravaged southeast.

In Adelaide, the temperature is expected to top 40C on Friday, and 45C in other parts of South Australia, where three out-of-control bushfires are threatening to jump containment lines.

"If you live near any existing fires you need to enact your bushfire survival plan as these fires may increase in ferocity," Country Fire Service chief officer Mark Jones warned South Australians.

"There are millions of sparks out there ready to go tomorrow if they break," he added ominously. 'I thought of you': Wagga Wagga Councillor sends emotional message to Deputy PM

The Country Fire Authority has declared a total fire ban across much of state from Friday as the navy prepares to evacuate 800 people trapped in Mallacoota.

The town was hit by a massive blaze on Tuesday as 4000 people sheltered on a beach amid apocalyptic scenes that were broadcast across the globe.

More than 50 fires are raging across Victoria and 17 people remain missing with grave fears for their safety.