Several NRL players appeared not to be singing Australia's national anthem at the opening State of Origin game in Adelaide, following controversy over whether it should feature in the series. 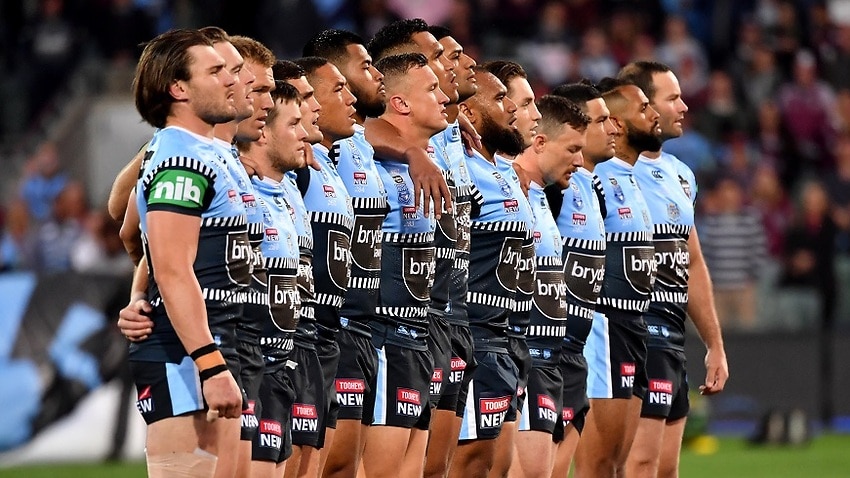 Some of Australia's high-profile National Rugby League players appeared not to be singing at the opening game of the 2020 State of Origin series on Wednesday night.

Other players appeared to be singing, but it is not compulsory to participate.

Ahead of last year's Origin series, Walker, Addo-Carr and currently injured Latrell Mitchell, who are all Indigenous, spoke about their refusal to sing, saying the anthem's lyrics don't reflect the story of First Nations people.

Latrell Mitchell, second from left, during the 2019 State of Origin series. Source: AAP

Speaking ahead of Wednesday's game in Adelaide, Mitchell said: "me and my boys don't feel represented".

The line "our home is girt [surrounded] by sea" is particularly difficult to accept, he previously said on former NRL player Denan Kemp's podcast, Bloke in a Bar.

“If you‘re going to say nobody was here when you discovered it, then where were we?”

Maroons players during the national anthem on Wednesday. Source: AAP

Former Wallabies player and author Peter Fitzsimons, who is not Indigenous, has also said the line "for we are young and free" is a denial of the truth of Indigenous Australians.

The players who appeared not to be singing on Wednesday have not commented on whether it was a boycott or their reasons for not participating.

The NRL has previously said each player has the right to decide whether or not to join in with the anthem and originally scrapped it from this year's Origin series.

But it was reinstated within hours of the decision after Prime Minister Scott Morrison argued its importance in a phone call to Australian Rugby League Commission chair Peter V'landys.

This year's Origin series was postponed due to the COVID-19 outbreak and saw a soldout crowd of 26,500 in the Adelaide Oval.

The venue's capacity was halved due to safety requirements.