After a day of emotional debate, NSW upper house MPs have voted against controversial laws to allow assisted dying.

Proposed assisted dying laws have been defeated 19 votes to 20 in the NSW parliament.

It was an emotional debate in the NSW upper house, with many MPs tearing up as they made their pleas for and against.

Even if the proposed legislation passed the upper house, it would have likely fallen through in the Legislative Assembly with both Premier Gladys Berejiklian and Opposition Leader Luke Foley opposing it. 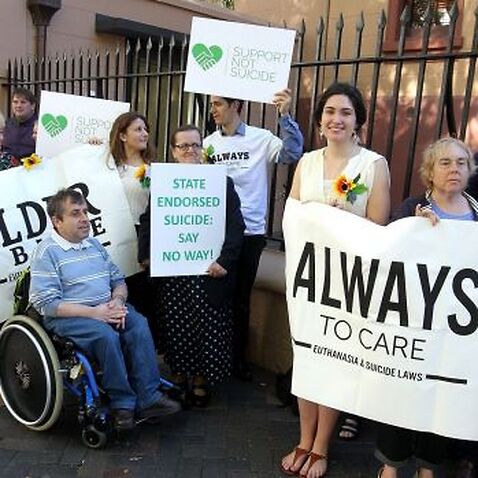 "l worry about the message it sends to a society where some old and frail people feel that they are too much of a burden on their loved ones that they have to end it all," Mr Foley told AAP.

It's not the first time such laws have been scrapped in NSW parliament, with the Rights of the Terminally Ill Bill defeated in its second reading by 23 votes to 13 in 2013.

The private members bill, introduced in September by Nationals MP Trevor Khan, would have provided patients 25 years or older, whose deaths are imminent and are in severe pain, a choice to end their lives.

Supporters insisted the bill would give terminally ill patients or those in excruciating pain the option to choose how they die.

"To see that happening to your loved one and not have a capacity to do something about it ... is an impossibly hard thing," Greens MP David Shoebridge said.

Those against the bill cited the need for better palliative care and raised concerns about future amendments potentially removing current safeguards.

"Rather than creating a perceived need for euthanasia, we should be emphasising the advances in medicine and technology that help people," Labor health spokesman Walt Secord told parliament on Thursday.

Outside parliament on Thursday morning, supporters and opponents rallied in the hope of influencing MPs.

Sheena Goodwin, 68, spoke of the agony she's witnessed as a registered nurse, given palliative care is not always available.

But 73-year-old Martin Burrows, from northwest Sydney, said the final few weeks he and his children spent with his wife as she died of cancer were precious.

He argued there must be a better way to deal with painful deaths than "a bill for suicide".

The defeat of the NSW legislation comes as a marathon debate over Victoria's assisted-dying scheme continues in their State Parliament.

In a dramatic debate in Victoria's Legislative Council, a vote on clause one of the assisted dying bill invoked screams of Nazi Germany and pitted party colleagues against each other.

After 12 hours of debate across two days on the explanatory clause of the controversial bill, a closure motion was called on Thursday to bring on a vote on the clause.

It provoked bill opponents including Liberals Inga Peulich and Bernie Finn to shout abuse across the chamber, including "Nazi".

The fiery outbursts prompted President Bruce Atkinson, who was not chairing the chamber at the time, to yell back at colleagues as he went to vote in support of the closure motion.

"You've lost" and "You had me up until now and you've lost me", Mr Atkinson said.

The closure motion was successful, prompting Liberal MPs to accuse the government of shutting down debate.

"It's one of the most undemocratic motions I have ever seen," David Davis said.

"Why on earth would you truncate debate on a bill like this."

But bill supporters say the motion was necessary because there are still more than 130 clauses to examine and vote on.

"We don't have a problem with what has happened at all," Greens MP Colleen Hartland said.

"I put my bill forward on this 10 years ago and for me this is a combination of a decade of campaigning on this, and I think what the government has done - especially Jill Hennessy - has run a remarkable process."

The debate continues into the night and will resume on Friday morning.

During questioning on the bill on Thursday, Special Minister of State Gavin Jennings revealed the government anticipated about 328 people each year will try to access the scheme.