Two more international arrivals into NSW have been found to be infected with the Omicron COVID-19 variant, which has also been reported in the Northern Territory. 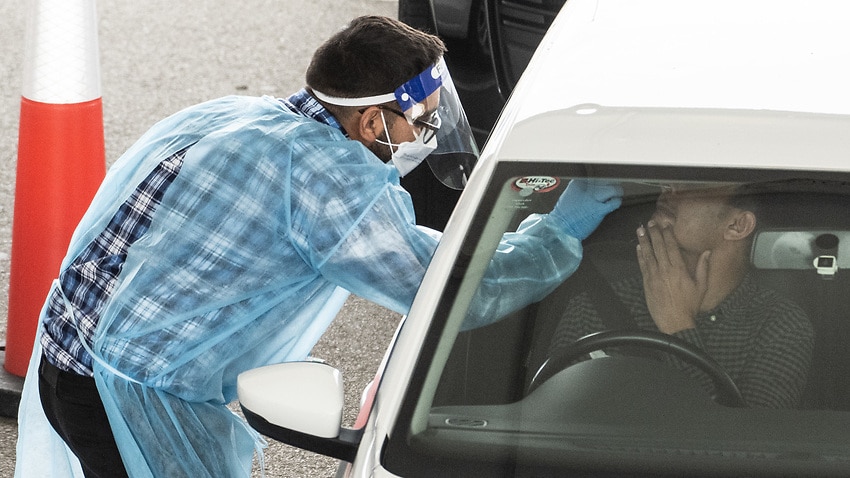 A healthcare workers administers a COVID-19 test at a drive through test centre in Sydney. Source: AAP

Four cases of coronavirus from the Omicron variant have been confirmed in NSW after the discovery of two more infected people.

The two new cases arrived on a Singapore Airlines flight from southern Africa on Sunday, and every other person who was on that flight is now a close contact who needs to get tested and isolate for 14 days immediately.

Both of the newly confirmed cases are fully vaccinated and are now in special health accommodation.

Genomic testing on Sunday confirmed two overseas travellers who arrived in Sydney had been infected with the new coronavirus variant.

Read More
What we know so far about Omicron, the new COVID-19 'variant of concern'

Both passengers were asymptomatic when they arrived on Saturday night and are in isolation in the Special Health Accommodation. Both are fully vaccinated.

NSW Premier Dominic Perrottet said 141 people have come to the state from the nine countries of concern over the past 24 hours, and all have been sent to hotel quarantine for 14 days.

Although he has ordered all international arrivals to quarantine at home for 72 hours, Mr Perrottet insisted the NSW international and state borders would remain open.

The three-day quarantine order is on top of a federal government requirement for travellers to enter quarantine for two weeks if they have been in South Africa, Lesotho, Botswana, Zimbabwe, Mozambique, Namibia, Eswatini, Malawi or the Seychelles in the past 14 days.

"Ultimately we need to open up to the world (and) we need to do so safely," he told reporters on Monday.

"The responses should not be 'Let's shut down'."

Dominic Perrottet urges NSW to learn to live alongside COVID

"We've got to learn to live alongside the variants of the virus that come our way," he said.

"And the vaccination rate here is one of the highest in the world.

"That is not the case in the southern African nations."

The premier has said there are no plans to adjust the state's reopening roadmap, which has restrictions easing for the unvaccinated on December 15.

However, restrictions will be tailored in response to the variant if needed, he said.

Meanwhile, the state added 150 new infections to its caseload on Monday.

For the fifth consecutive day, no new deaths were reported.

NSW is 94.5 per cent single-dosed for everyone 16 and over, while 92.4 per cent are fully vaccinated.

Omicron arrives in the Northern Territory

The Northern Territory has confirmed a man quarantining at the Centre for National Resilience in Howard Springs is infected with the Omicron COVID-19 variant.

It is the first case of the new variant detected in the territory.

The man in his 30s arrived in Darwin on a repatriation flight from South Africa on Thursday and his positive virus result was confirmed on Friday evening.

Meanwhile, NSW has recorded its third possible Omicron COVID-19 cases, while in Victoria, health authorities are waiting to see if a visitor to the state was infected with the new variant.

It comes as two more residents from Binjari Aboriginal community were diagnosed with the virus.

"It's not unexpected," NT Health Minister Natasha Fyles said on Monday of the ongoing infections in the community.

A 17-year-old girl who was a household contact of another case was in the Howard Springs facility when she was diagnosed.

A 19-year-old woman became infected while locked down at the community, about 330km south of Darwin.

It brings the current outbreak to 58 cases.

Meanwhile, the first round of tests in the remote community of Lajamanu, 900km south of Darwin, have come back negative.

More test results are due late on Monday.

"Everything is looking positive but it's certainly early days," Ms Fyles said.

The community of about 1000 was put into lockdown on Saturday after the virus was detected in wastewater sampling.

Lajamanu has a low vaccination rate, with only about 35 per cent of residents double-dosed.

Ms Fyles said 20 doses had been administered since Saturday.

Binjari is in a hard lockdown, with residents only permitted to leave their homes in an emergency or for medical treatment.

Greater Katherine, 320km south of Darwin, is under a lockout.

A man who visited Victoria from NSW after visiting a country with the Omicron COVID-19 variant does not have the new virus strain.

"The case does not have the Omicron variant. The Department of Health will provide new advice to relevant identified contacts of this case," the department confirmed in a statement on Monday night.

The state recorded another 1007 new COVID-19 infections and three deaths on Monday.

In the chief health officer's daily release, the department confirmed they interviewed a person from NSW who had been to one of nine countries of concern and then visited Victoria.

That person has since returned to NSW and tested positive for COVID-19.

The case was "infectious and asymptomatic", as well as fully vaccinated, when they travelled to Victoria.

The health department is sending text messages or Service Victoria app alerts to anyone who may have come into contact with the case.

People of lower risk have been instructed to get a test and isolate until they receive a negative result.

"The Department of Health is taking a conservative approach to the designation of this individual's close contacts," the CHO statement said.

"Further contact tracing work is ongoing and is likely to produce more contacts."