While the premier says she expects case numbers to rise, the percentage of people in isolation for their full infectious period is declining, data shows. 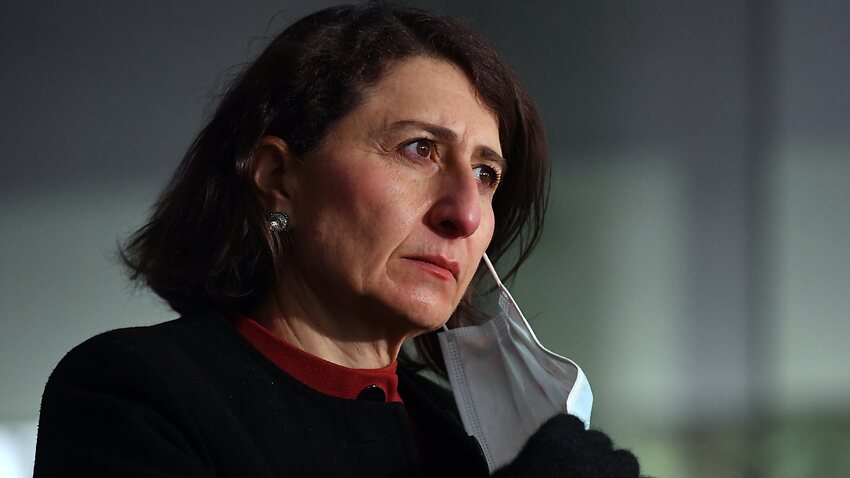 The cases come from a record 85,185 tests and include more in aged care.

There are currently 118 people in hospital with 28 in intensive care, 14 of whom are ventilated.

Data shows the percentage of Thursday's cases in isolation for their full infectious period was only 30 per cent, a number that has been on a bumpy decline since early July.

On 3 July, 62 per cent of new cases had been in isolation for their full infectious period. By 20 July this number had dipped to 47 per cent and on 21 July, 34 per cent.

NSW Premier Gladys Berejiklian says given the number of people infectious in the community, she expects the number of cases to rise even higher.

"We anticipate case numbers will continue to go up before they start coming down and we need to brace ourselves for that," she told reporters on Thursday.

"[The virus] is spreading like we've never seen before."

Of the new locally acquired cases, 67 are linked to a known case or cluster, 45 are household contacts and 22 are close contacts. The source of infection for 57 cases is under investigation.

There have now been 1,648 cases linked to the outbreak since 16 June.

The premier said the state wouldn't see the results of the harsher restrictions until early next week, by which time Greater Sydney would already have endured four weeks of lockdown, which was meant to end on 30 July.

She said 55 per cent of those in NSW with the current Delta strain were under the age of 55, which was a concern.

"This is a very, very different and more contagious strain than we've seen and it's a concern that that rate continues to be high," she said. "Delta is very different to what we have and that's why everybody needs to treat it differently.

"Don't have interaction with people outside your immediate household unless you have to."

Read More
'Don't get sick': As coronavirus ravages Indonesia, poorer citizens are struggling to get care

Ms Berejiklian implored NSW residents on Thursday to get vaccinated as soon as possible, which she said would allow authorities to relax restrictions.

"The more people we have vaccinated, the quicker we can live life as freely as we would like."

Of those currently in intensive care, nobody has had two doses of the vaccine, which proves it works in preventing serious illness, she said.

"When we have a large proportion of population vaccinated we won't be talking about case numbers anymore. We'll talk about the people who have serious illness in hospital because the vaccine prevents serious illness."

The premier said COVID-19 had now spilled over from the Fairfield local government area to the Canterbury Bankstown and Cumberland area, with residents urged to come forward for testing.

Residents of these areas are urged to come forward for testing even if they have only the mildest of symptoms.

The NSW Health list of exposure sites listed pharmacies in Merrylands, Auburn and Punchbowl among new venues of concern.

A gardening shop in Mascot was exposed for a three-hour stretch on Saturday.

Three sites in Wollongong and nearby Fairy Meadow also made the list.

Late on Thursday night, NSW Health said fragments of the virus that causes COVID-19 have also been detected at a Byron Bay sewage treatment plant.

"There are no known cases in this area, which is of great concern," a NSW Health statement said.

The three COVID-positive residents and two staff members at disability group home Unisson Disability in Parklea had received only one dose of a vaccine, despite being included in the highest priority group for immunisation.

It's the first outbreak in a disability group home.

Public health officials have investigated the outbreak to make sure others at the home have been tested and are isolating and being cared for.

The nursing homes hit by the latest outbreaks were The Palms in Kirrawee and Japara Corymbia in Belrose.

All other staff and residents at the two Sydney facilities have since been tested for coronavirus.

Read More
More coronavirus support is now available to people in NSW. Here's how you can access it

Meanwhile, people in the central-western town of Orange and its surrounds are in their second full day of a seven-day lockdown after a COVID-19 positive delivery driver from Sydney visited the area and infected another person.

The lockdown in the Orange, Blayney and Cabonne local government areas marks the first time a stay-at-home order has been imposed in regional NSW.

The NSW figures come as Queensland Premier Annastacia Palaszczuk announced her state's border with NSW would close from 1am on Friday.

"This is an important step that allows Queensland to safely ease COVID-19 restrictions across the state," she said.