The NSW Parliament has criticised Collingwood Football Club president Eddie McGuire for "being a continual boofhead".

"This House condemns Mr Eddie Macguire, the President of the Collingwood Football Club, for…being a continual boofhead," read a motion passed by the NSW Legislative Council.

The criticism follows Mr McGuire's comments about Sydney Swans player and Andyamathanha and Narungga man Adam Goodes' Indigenous-inspired celebration of a goal he kicked last Friday night against Carlton during the AFL Indigenous round. 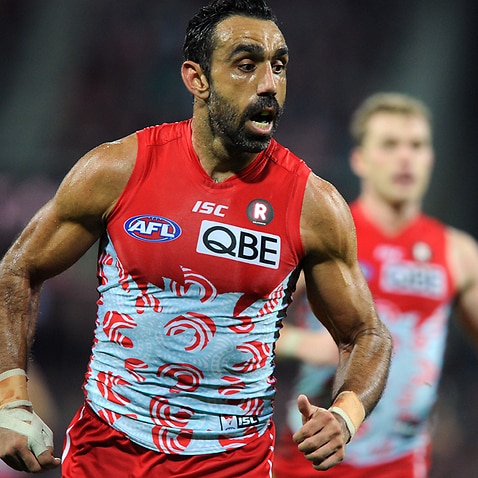 "We've never seen that [celebration] before and I don't think we ever want to see it again to be perfectly honest, regardless of what it is," said Mr McGuire, who commentated for Fox Footy that evening.

The House also criticised Mr McGuire for commenting that Goodes' celebration was a "made-up dance", and "not something that has been going on for years".

It recognised that Mr Goodes was celebrating his goal and Aboriginal culture.

"This House condemns Mr Eddie Macguire, the President of the Collingwood Football Club, for being a continual boofhead"

Mr McGuire’s comments are a reminder of the racial gaffe he made about Mr Goodes in 2013. He suggested on a Triple M breakfast radio show with co-host Luke Darcy that Mr Goodes be used to promote the King Kong musical being played in Australia.

"One of the great promos ever was the hand coming out of the Eureka tower. What a great promo that is for King Kong," said Mr Darcy.

"Get Adam Goodes down for it, you reckon?" McGuire responded.

"Today the NSW Upper House has recognised that Adam Goodes is a sensational footballer, a great Australian and a mentor to many, and supported his cultural expression in celebrating a great goal," he said.

"If we're telling our people out there that you can't represent your culture or represent where you come from, what are we saying?"

Mr Goodes explained that the war dance he'd performed was inspired by the AFL's Under 16 Indigenous team, the Flying Boomerangs.

"If we're telling our people out there that you can't represent your culture or represent where you come from, in around specifically acknowledging Aboriginal and Torres Strait Islander people, what are we saying?" Mr Goodes told media.

The 35-year-old professional Australian Football League player is a dual Brownlow Medallist, dual premiership player and four-time All-Australian. He has represented Australia in the International Rules Series and is a member of the Indigenous Team of the Century.

In 2014 he took home the Australian of the Year Award for his work rehabilitating Indigenous youth in detention centres with his former teammate and cousin Michael O'Loughlin.