The manner in which NSW Police officers arrested and humiliated two women in hijabs over an alleged unbuckled seatbelt was "appalling" and had the potential to undermine the entire force, critics say. 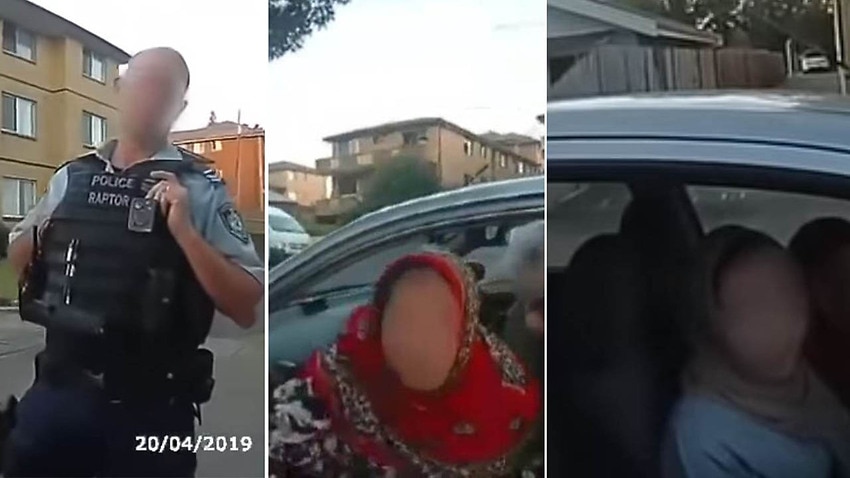 Two NSW police officers have been found to have engaged in serious misconduct by racially abusing two Afghan women at a traffic stop in Western Sydney. Source: Supplied

Two New South Wales Police officers have found to have engaged in serious misconduct by belittling two Afghan women during a traffic stop in Sydney's west.

The Law Enforcement Conduct Commission (LECC) has released video of the incident, which occurred in April this year, after an independent police oversight body on Thursday determined the pair acted inappropriately.

The commission heard the officers followed the car for two minutes because they believed one of the women was not wearing a seatbelt.

Video footage shows 24-year-old woman and her stepmother being pulled over and belittled by two officers Source: Supplied

"You have to be the most stupidest person I've met as the driver of a motor vehicle," one officer says to the 24-year-old woman behind the wheel as he approaches the car.

Video shows the officer threatening to put the passenger, an older woman, in prison after demanding the pair produce identification.

“We’re taking her back to jail anyway,” he can be heard saying in the video, after learning the older woman recently migrated to Australia.

He later tells his partner: “hop out of the car, whack the cuffs on her".

The officer can also be heard threatening to charge her: “Don’t argue with me, love, or you’ll be going in the back of the paddy wagon as an accessory to bloody murder".

Two NSW police officers have been found to have engaged in serious misconduct at a traffic stop in Western Sydney. Source: Supplied

He also accuses the two women of "telling fibs" when they become confused about their ages and year of birth.

Later, the officer says: "don’t take advantage of our system".

An investigation into the officers' conduct was launched after the 24-year-old driver made a formal complaint and said further offensive comments were made after the camera worn by the officers was switched off.

She told the commission she was also accused of having drugs in the car and the officers suggested she would have been "shot from behind" in Afghanistan if police there pulled her over under the same circumstances.

The LECC report said the main officer had used “intimidating and abusive language” and deliberately “bullied and frightened” the two women during the traffic stop.

The second officer was also found to have engaged in misconduct for making "baseless threats" to the women about being taken into custody or immigration detention, and had "sought to intimidate" by aggressively asking the driver what her religion was.

One of the officers speaks with the women. Source: SBS News

The LECC report recommended disciplinary action to be considered against both officers.

NSW Police declined to comment on the current employment status of the two senior constables.

"A formal response will be provided to the LECC in due course," a police spokeswoman said in a statement.

“This is not good enough," she said.

"We need to maintain the trust of the police within our multicultural communities, and frankly, behaviour like this undermines the good work done by police officers across NSW."

"For them to face the same actions from police officers is extremely disappointing."