Of the new cases reported in the 24 hours to 8pm on Monday, 21 were infectious in the community and eight were in isolation for part of their infectious period. 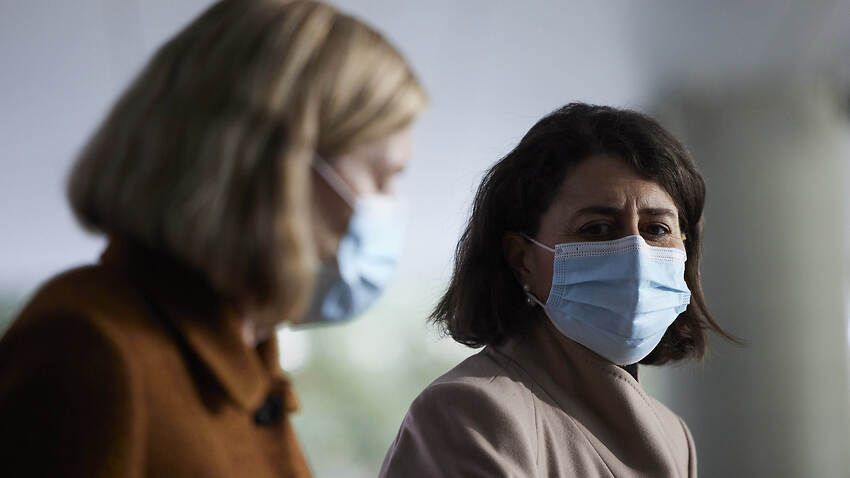 New South Wales has recorded 78 new locally acquired COVID-19 cases, as transmission of the virus in workplaces and households remains a concern.

Of the new cases reported in the 24 hours to 8pm on Monday, 21 were infectious in the community and eight were in isolation for part of their infectious period.

It comes after the state recorded 98 new local cases the previous day.

NSW Premier Gladys Berejiklian said while the virus continues to spread in workplaces and households, it's "always pleasing" to see a drop in the daily case numbers.

“That 78 would have been much higher had people not been doing the right thing and we just need everyone to stick with it and make sure you protect yourself and your family and your work colleagues in particular," she told reporters on Tuesday.

"I'm convinced if we focus on those areas of concerns, namely workplaces and households, we will get through this."

A pedestrian walks along George St in the central business district in Sydney, 20 July 2021. Source: AAP

Chief Health Officer Dr Kerry Chant confirmed a woman in her 50s who had contracted the virus had died, as reported on Monday afternoon. She was a resident of southwestern Sydney and a close contact of a COVID-19 case.

She is also believed to be the mother of twin removalists who were alleged to have travelled to regional NSW after being told they had COVID-19.

Her death is the 61st in NSW related to COVID-19 and the fifth of the current outbreak.

"We have to stop the spread of COVID. To do this, we all need to work together. We need to limit our movements. We need to consider whenever we leave our house that anyone with us and anyone we come into contact with could [have] the virus," she said.

"So whilst it is in our human nature to engage in conversations with others, to be friendly, unfortunately this is not the time to do that."

There are currently 95 COVID-19 cases admitted to hospital with 27 people in intensive care, 11 of whom require ventilation.

A total of 1,418 people have now been diagnosed with COVID-19 since the state's current outbreak - called the Bondi cluster - began on 16 June.

Of the new local infections, 49 are linked to a known case or cluster, with 45 being household contacts and four close contacts. The source of infection for 29 cases is under investigation.

Dr Chant said she is concerned about the emerging risk in the Canterbury-Bankstown local government area and urged residents to come forward for testing.

“There are a number of cases and there is also a number of exposure sites in that area,” she said.

"That means there are chains of transmission we are yet to crack and yet to break. That engenders quite significant concern to me," she said.

Several regional NSW venues also joined the list of COVID-19 case locations on Tuesday afternoon, including an Officeworks, a Woolworths and a Pizza Hut at Orange in the state's central west, and a Coles Express in Goulburn.

⚠️PUBLIC HEALTH ALERT – VENUES OF CONCERN⚠️
NSW Health has been notified of a number of new venues of concern, including venues in Goulburn and Orange, associated with confirmed cases of COVID 19. pic.twitter.com/sFOzMtsGQR

It comes as people living in Greater Sydney, the Blue Mountains, Central Coast, Wollongong and Shellharbour endure their fourth week of a lockdown.

Monday marked the first full day since tough restrictions were enforced across Greater Sydney under a new public health order, including a pause on construction until 30 July.

Ms Berejiklian said she expects to see the effect of these "difficult decisions" by the end of the week.

"I do want to stress that the government is also working very hard with our communities to make sure that people can go back to work safely after 30 July and I'll have more to say about that in the coming days," she said.

"But in the meantime, thank you, everyone, for your efforts. It is making a difference."