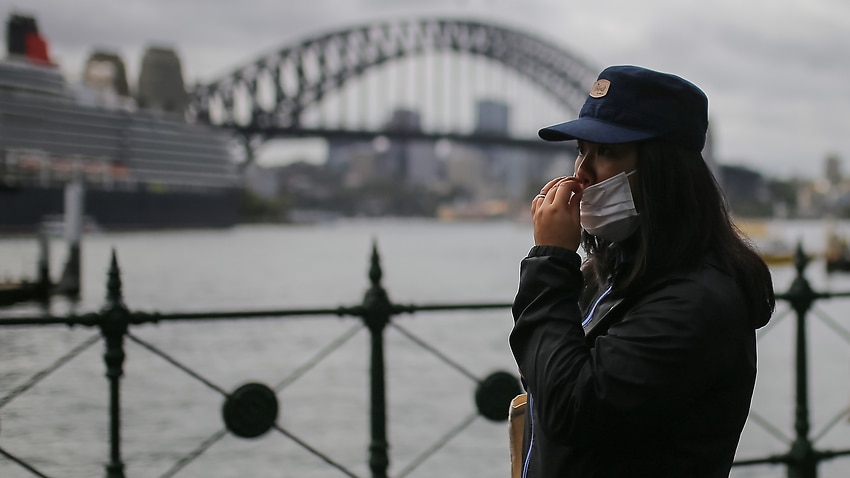 Testing numbers dipped significantly in NSW as the state battled a heatwave over the weekend. Source: AAP

NSW has recorded just one new COVID-19 case in the past 24 hours - the lowest number in almost two months.

The case is a close contact of a previously reported case at Hornsby Hospital and went into isolation before they became infectious, NSW Health said on Friday.

It's the first time NSW has recorded one COVID-19 case since June 22 with daily case numbers hovering between five and 22 since late June.

Meanwhile, the Australian Medical Association and Royal Australian College of General Practitioners on Friday called for NSW-Queensland and NSW-Victoria border residents requiring medical care to be able to freely cross between states.

Those who cross the border from NSW to Queensland have since August 8 been required to obtain an essential activity permit or quarantine for 14 days.

AMA NSW President Dr Danielle McMullen said the NSW-Queensland border regime was too strict, with some patients unable to access cancer treatments or undergo specialist surgery and others unable to see their newborn babies.

Doctors had also been prevented from crossing the NSW-Queensland border for work, including fill-in and fly-in-fly-out doctors in northern NSW regional communities.

"This also affects doctors-in-training and impacts on their ability to move interstate with their families. Not only do they miss out on the opportunity to work in a rural and regional area, but these communities are left short-changed," Dr McMullen said in a statement.

"The border closure issues are causing disruption to the usual workings of the medical system at a time when we need it to be functioning at its peak."

NSW Premier Gladys Berejiklian on Thursday dismissed calls from her own deputy to scrap the state's border permit system with Victoria.

NSW Nationals leader John Barilaro met with stakeholders in Albury-Wodonga on Thursday, breaking ranks with the government to join calls to relax restrictions.

While Ms Berejiklian conceded "tweaks" to the system may be necessary, she denied border measures had caused tension with Mr Barilaro and said NSW's safety was her priority.

"We're trying our hardest to get the right balance but we appreciate, along the way, that certain communities will suffer more than others," Ms Berejiklian told reporters.

"We have an open and frank conversation and (Mr Barilaro) is always a bit outspoken."

Prime Minister Scott Morrison is expected to plead with premiers and chief ministers to lift border restrictions when national cabinet meets on Friday.

Businesses and farm groups have also queried restrictions on large parts of Queensland, NSW, Victoria and South Australia that have no coronavirus cases.

Meanwhile, Sydney bus drivers have called off a planned strike after the NSW government agreed to a review of mandatory mask use on public transport.

The Rail, Tram and Bus Union met with government officials at the Industrial Relations Commission on Thursday seeking an agreement to avoid a strike next week.