"The connection to language, law and culture is so important that the NT government is investing in homelands like never before".

Responding to the WA move, the prime minister this week suggested indigenous Australians were making "lifestyle choices" and taxpayers shouldn't have to endlessly subsidise communities with no economic future. "The connection to language, law and culture is so important that the NT government is investing in homelands like never before," NT Chief Minister Adam Giles told reporters on Wednesday.

Mr Giles is the first Aboriginal head of state or territory in the country.

Territory government funding commitments for remote communities include measures to encourage children to go to school and support economic participation.

"We recognised economic development and jobs are really important but we support people who live on their country," he said.

Jobs and training provide hope and a viable future for remote communities, but Aboriginal ties to land are "so important it cannot be dismissed", he said.

Warren Mundine has told SBS Tony Abbott's comment suggesting Indigenous Australians were making 'lifestyle choices' to live in remote communities was 'silly' but does not detract from the need for a national conversation on the issue.

"It’s not like some schoolteacher has retired and they've gone bush for some sort of sea change," he said.

But he said the prime minister's comments should not distract from the important issue he was highlighting.

"The comments are wrong," he said. "But he has raised a very important issue about how do we service these communities, how to we ensure kids get to school…they're legitimate arguments."

He said he did not question the prime minister's commitment to Indigenous Australia.

"This prime minister is committed and is genuine in his approach to closing the gap," he said, adding that it was "not the first time he has mixed up his words."

"Just off the top of my head I can think of five other occasions."

Senior government ministers have come to the defence of Tony Abbott after his 'lifestyle choice' comments.

Mr Abbott is resisting opposition calls he apologise for saying taxpayers couldn't endlessly subsidise people who chose to live far away from schools and jobs. Cabinet minister Christopher Pyne dismissed the calls as a bizarre and hysterical response to an economic issue.

"There comes a point where the taxpayer has to say how much money can be spent in this community where there is no economic future," he told reporters in Brisbane.

Malcolm Turnbull said attempts to paint Mr Abbott as insensitive to Indigenous Australia was a bridge too far.

It was important the issue be discussed thoughtfully and rationally, he said.

"Rather than - as is often the case with the prime minister - that whenever he opens his mouth his critics swoop on him like a pack of forwards onto a bit of loose balls."

Treasurer Joe Hockey said Mr Abbott was "absolutely right" because you could not raise an expectation that the quality of opportunity was available in every part of Australia.

"Some of them say it's part of their tradition, that is their lifestyle, that is the way they live," he told ABC radio. 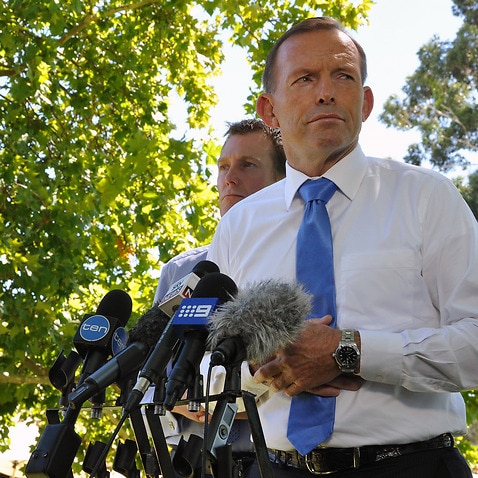