New Zealand acting Prime Minister Winston Peters has suggested Australia should change its flag to include "a big kangaroo". 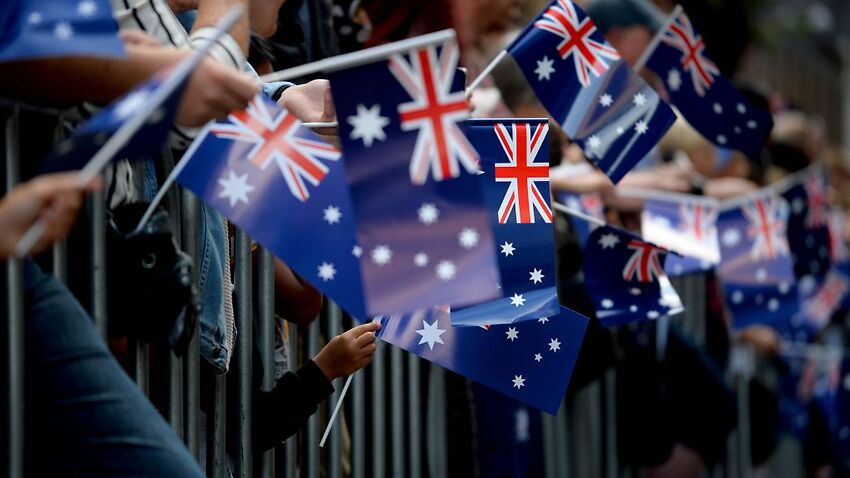 Australian only adopted its Southern Cross-flag in 1954. Source: AFP

New Zealand's acting prime minister has suggested Australia should change its flag to include a big kangaroo, as his government refuses to back down on criticism of Australia's deportation regime.

Repeatedly this week, New Zealand deputy PM Winston Peters has accused Australia of copying his nation's flag and called for the 116-year-old Aussie ensign to be changed to avoid mix-ups.

On Sunday, he went as far as to give his input into what an alternative design may be.

"I think we've even already got the solution for them, if you like: Probably a big kangaroo, like the maple leaf in Canada," Mr Peters told Newshub Nation.

Mr Peters was a fierce opponent of changing New Zealand's flag during the country's referendum in 2016, during which confusion over the two banners was often raised.

"We designed it and they borrowed it and if we wanted to clear the matter up they should change their flag," he told reporters in Wellington this week.

New Zealand adopted its Southern Cross-starred flag in 1902, while Australia formally only did so in 1954.

But the Aussie national banner won a competition in 1901 and was flown in September that year during the first Flag Day. It underwent minor changes during the decade.

Peters comments follow a trading of barbs between politicians across the Tasman as New Zealand's government continues to criticise the deportation of hundreds of its citizens from Australia.

Last week, Home Affairs Minister Peter Dutton replied by taking a swipe at New Zealand's security efforts in the region, saying Australia did a lot of heavy lifting for its neighbours.

It came after Kiwi Justice Minister Andrew Little said Australia's deportation regime lacked "humanitarian ideals" and was the product of "venal" politics, a position he has since doubled down on.

"Every country has the sovereign right to make their own laws. But when those laws threaten human rights, then we should call it out," Mr Little wrote in the Spinoff on Thursday in reply to Mr Dutton.

"Especially when that country's our oldest and best mate."