Barack Obama has opened up on the struggles of living in the public eye and concerns about social media in a candid interview with Prince Harry.

Barack Obama says becoming the US president was a sacrifice because his family remains in the public eye even after stepping down.

In a rare interview recorded during the Invictus Games in Toronto, Canada, back in January, Mr Obama was quizzed by Britain's Prince Harry on BBC Radio 4's Today program about the challenges during his time at the White House.

"Your loved ones are made vulnerable in ways that might not have been true 20 years ago or 30 years ago.

"So it is a sacrifice that I think everybody has to be at peace with when they decide to go into politics. But, ultimately, I think the rewards of bringing about positive change in this world make it worthwhile." Barack Obama and Prince Harry watch wheelchair basketball at the Pan Am Sports Centre at the 2017 Invictus Games in Toronto, Canada.
AAP

Mr Obama also warned of the dangers of the internet, which he believed could narrow our perspective if we did not broaden our horizons.

"One of the dangers of the internet is that people can have entirely different realities," he told the prince.

"They can be cocooned in information that reinforces their current biases. Things aren't as simple as they've been portrayed in whatever chat room you've been in. 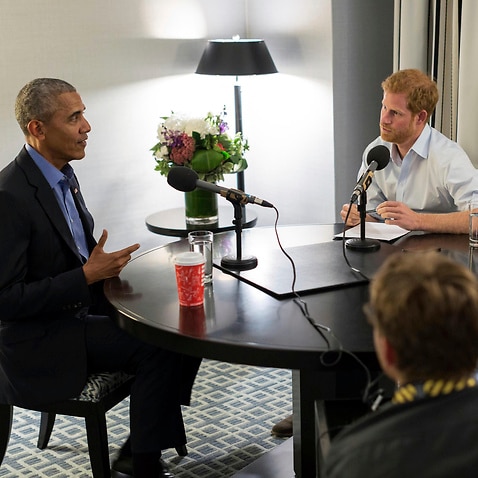 "The question has to do with how do we harness this technology in a way that allows a multiplicity of voices, allows a diversity of views, but doesn't lead to a Balkanisation of society and allows ways of finding common ground."

Mr Obama added people can find out how complicated simple matters can be when discussing them in a pub, rather than online.

"Social media is a powerful tool for people of common interest to convene and to get to know each other," he added.

"But then it's important for them to get offline, meet in a pub ... and get to know each other.

"Because the truth is that on the internet, everything is simplified and when you meet people face-to-face it turns out they're complicated."

The former president said he felt a sense of "serenity" when passing on the mantle of leader, but was optimistic about the future.

"There was a sense that we had run a good race," Mr Obama said.

'Do I need a British accent?' @BarackObama is interviewed by Prince Harry for his guest edit of @BBCr4today. In this warm-up, the prince jokingly warns the ex-president he'll get "the face" if he pauses too long between answers #r4today pic.twitter.com/2887dGlJkG

"If you had to choose a moment in human history in which you'd want to be born you'd choose today because the fact is that the world is healthier, wealthier, better educated and more tolerant, more sophisticated and less violent."

Mr Obama said following current President Donald Trump's inauguration in January, he was thankful for all the support his wife Michelle Obama offered during his leadership.

"You know, the first thing that went through my mind was, sitting across from Michelle, was how thankful I was that she had been my partner throughout the whole process," he said.

"She is spectacular, funny warm person. She was not someone who was naturally inclined to politics. So in some ways, despite the fact she was, I think, as good of a first lady there has ever been, she did this largely in support of my decision to run."

The interview was recorded in Toronto in September on the sidelines of the Invictus Games, the athletic tournament created by Harry for wounded former soldiers.

On his new routine, Mr Obama told the prince: "I wake up later, it's wonderful to be able to control your day."

The prince opened the discussion by saying: "This is the first interview you've said 'yes' to doing since you handed over the reins".

Harry is due to marry his US actress girlfriend, Megan Markle, on May 19 at St George's Chapel in Windsor Castle near London.

According to British press reports, civil servants are concerned a wedding invite from the couple to Mr Obama could cause a further rift between Britain and Donald Trump following a series of high-profile spats.

Melbourne has emerged from its sixth coronavirus lockdown