As displacement around the world hits a record high, aid workers warn many crises - including the situation in Venezuela - are still not getting the international attention they need. 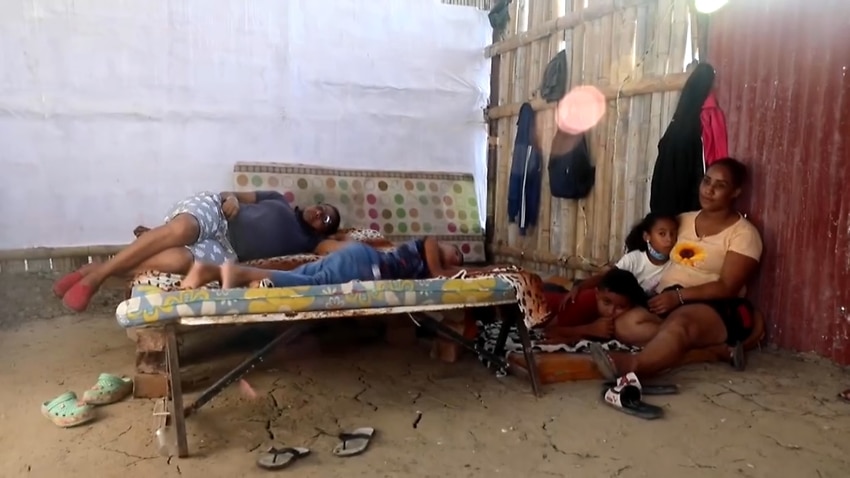 Chirlys, right, with her family in their new home in northern Peru after leaving Venezuela. Source: World Vision

In a shanty town in northern Peru, a young family with little more than each other is settling into a new life.

Their small one-bedroom aluminium-clad home with a sole mattress on the floor is modest, but for Chirlys, her husband Jose, and their three children, it is far better than the extreme poverty they left behind.

“We left Venezuela to get a good future for our children,” says Jose, a butcher, who trekked 2,000 kilometres with his family to Peru.

“It already feels a little better than there in Venezuela because of the situation where there was a lot of crime, a lot of insecurity, a lot of hunger."

The migrant family received some financial assistance through a World Vision program within their first month of arriving and are now feeling a sense of optimism that has long eluded them.

Chirlys has epilepsy and now has access to medical care and the right medication, while children Sheirenson, 11, Deicari, 9, and Andrés, 2, are excited to return to school.

“Here is where we are going to start a business, while the children will have a roof to sleep under and a school to study in.”

Despite their trauma and hardship, the family is considered one of the 'lucky' ones.

Chirlys' family is just one of many from Venezuela impacted by the devastating fallout of the South American nation’s now-two-decade-long political, socio-economic and humanitarian crisis.

While the turmoil first began at the turn of the millennium during the reign of then-president Hugo Chávez, the situation has deteriorated under the rule of President Nicolás Maduro.

Since 2014, there has been an 8,000 per cent increase in the number of Venezuelans seeking refugee status. Currently, 5.4 million Venezuelans are classified as either refugees or migrants.

Venezuelan migrants at the border between Colombia and Ecuador. Source: AAP

The crisis has on occasion grabbed global headlines, but aid groups say it is one of many regions where the scale of displacement is often overlooked.

“In places like Colombia, you have more than a million people coming in from Venezuela,” says World Vision CEO Daniel Wordsworth.

“Those people are at risk of being trafficked through Latin America up into the US, so they're very vulnerable.”

Desperation in parts of Africa

Mr Wordsworth believes it is a problem known all too well in some parts of Africa.

Fresh unrest in the Democratic Republic of Congo and the Central African Republic is already seeing large numbers of people displaced.

It is of major concern to already-overwhelmed aid groups on the ground, in a region where conflicts are numerous.

Years of brutal fighting in the Democratic Republic of Congo has escalated in the past 12 months. Source: AAP

Joseph Kamara is World Vision’s head of humanitarian and emergency affairs for East Africa, based in the Kenyan capital, Nairobi. He describes the regional situation as “very challenging”.

“We've had conflict that has raged on in various parts of the region. In Sudan, in South Sudan, and now the Tigray region of Ethiopia, which has pushed significant, significant numbers of people into very challenging circumstances.”

Growing up in a refugee camp in Uganda

“At the moment we are very desperate. We are desperate because help is not sufficient.”

Fears of famine in Afghanistan

In the Middle East, World Vision also fears another famine is imminent in Afghanistan, while the UNHCR is predicting another refugee crisis in the region as the Taliban increases its deadly push for more control and American troops begin to leave.

“I'm concerned that without the continuing support of the global community to security and to development, that again we'll see a very large exodus out of that country.”

The number of refugees from Afghanistan (2.6 million) is currently the third-highest in the world, behind Syria (6.7 million) and Venezuela (4 million).

Calls for Australia to help

Barat Ali Batoor was a photojournalist in Afghanistan until he fled political and religious persecution.

The 38-year-old has been in Australia since 2013 and believes another civil war is brewing in his home country.

"I feel devastated because since I left, like every day, the security situation only got worse and also it is getting worse,” he says.

“I am not really hopeful about the future.”

Barat, who now works as a refugee caseworker in Melbourne, has since married and has a two-and-a-half-year-old son named Aslan.

The young father says he is grateful for his family’s prospects but hopes world powers continue to support Afghanistan, despite the pending closure of foreign embassies in his homeland, including Australia’s.

“It is only the civilians and the people of Afghanistan who are paying the price, and they are the ones who will be paying even more [without support].”

The calls come in the wake of a sobering report released by the UNHCR of Friday which found global displacements have reached their highest total on record.

There are 82.4 million people now classified as ‘forcibly displaced’, while more than two-thirds of the world’s refugees come from just five countries (Syria, Venezuela, Afghanistan, South Sudan and Myanmar).

Ms Steer believes one of the most worrisome findings in the annual Global Trends Report is the fact that 86 per cent of the world’s refugees are hosted in either poor or developing countries, many of which are in Africa.

“The situation in Africa, in East Africa in particular, is complex,” Ms Steer says.

“You have some of the most generous countries there providing safe refuge for refugees, but at the same time, some of those countries themselves are producing refugees.”