'Overjoyed': Uighur family reunited in Australia after being forcibly separated for three years

Sadam Abdusalam has been fighting to have his wife and his young son, who is an Australian citizen, freed from house arrest in Xinjiang. 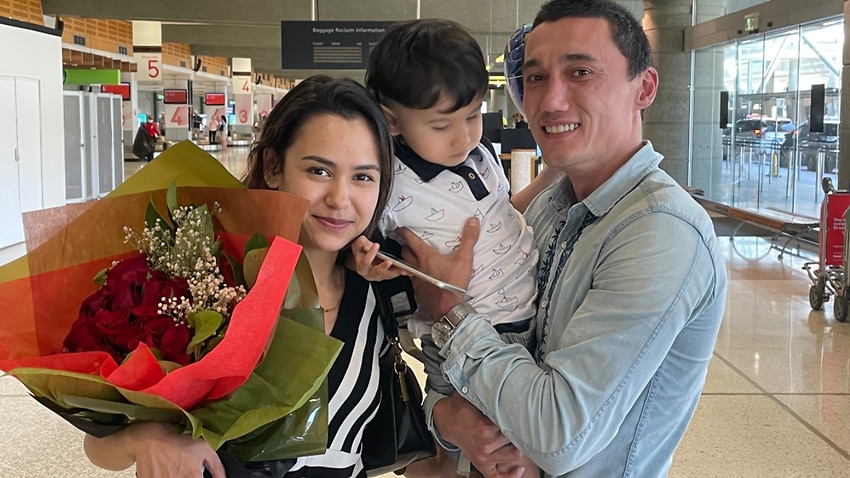 Sadam Abdusalam has been reunited with his wife and son in Sydney. Source: Twitter

An Australian-Uighur man has been reunited in Sydney with his wife and young son after a long fight to bring them to Australia.

Sadam Abdusalam previously told SBS News that his wife Nadila Wumaier and his son, who is an Australian citizen, had been in house arrest in the Chinese province Xinjiang.

Mr Abdusalam had not seen his wife for three years and had never met his son, who was born in Xinjiang.

On Friday, he posted photos on Twitter of his family arriving at Sydney Airport, saying that he was "so overjoyed" to be reunited with them.

"I am so overjoyed to inform everybody that yesterday I was reunited with my wife, who I have not seen for three years, and my son, who I had not met," he said in a statement posted on Twitter.

"I never thought this day would come and I would dearly like to thank everyone who worked so hard to reunite us."

Thank you Australian ,thank you everyone 🥰🥰💖💖💖💖💕 pic.twitter.com/IGNjsz2r7B

It's estimated that more than one million Uighurs, a Muslim minority, are currently forcibly detained in "reeducation camps" across the highly-surveilled Xinjiang autonomous region.

The family’s lawyer, Michael Bradley, was at Sydney Airport when Mr Abdusalam met with his family on Thursday.

“It was incredible, it was a very happy ending to a really long story where a happy ending was never guaranteed. But it was perfect, more than we can ask for,” he told SBS News.

Mr Bradley said the family is still adjusting but is very relieved and thankful to be "free" and in Australia.

Ms Wumaier and son Lutifier were able to leave China after local authorities returned her Chinese passport to her.

They touched down in Australia two weeks ago after 48 hours of air travel before going into quarantine in Queensland ahead of their arrival in Sydney.

Mr Bradley said that once Ms Wumaier’s passport was returned to her, “things moved quite quickly”. But he said he does not know what happened on China's end to allow her and her son to leave.

In Feburary, when asked by Mr Abdusalam on The ABC's Q&A program why his family would not be released from house arrest, Minister Wang Xining, the deputy head of mission at the Chinese Embassy in Australia, said that his wife had told the local government in China that she did not want to come to Australia.

The claim was quickly shut down by Ms Wumaier on social media.

Elaine Pearson, Australia’s director at Human Rights Watch, told SBS News she was elated to see the family reunited, but cautioned there were numerous other Uighur families that remain separated because they have been banned from leaving Xinjiang.

“I think while this is a very happy day for Sadam and his family, we still need to keep fighting for other families so they too can be re-united.”

Read More
This Uighur woman sent money to her parents in Australia. China accuses her of financing terrorism

Mr Abdusalam also thanked Foreign Minister Marise Payne and the Department of Foreign Affairs and Trade (DFAT) for the work they have done on the matter.

Minister Payne formally requested the Chinese government to allow the family to come to Australia following an ABC Four Corners episode on their situation last year.