Mental health groups have reported an increase in the number of Australians seeking support as the country has its say on whether or not to legalise same-sex marriage.

The increased pressure on mental health services is expected to continue regardless of Wednesday’s outcome of the same-sex marriage postal survey.

For some, the debate has been an incredibly emotional process.

Nathaniel said growing up as a homosexual man in Sydney was a painful experience.

He said he felt forced to repress his sexuality as a result of negative comments he heard as a teenager. 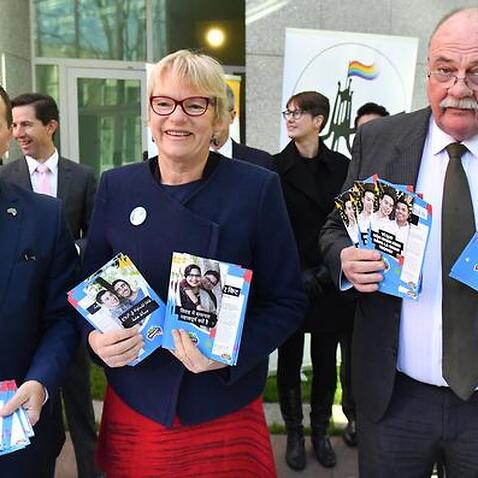 He told SBS News those painful memories have been inflamed more than a decade later by the postal survey.

"As a gay man living in the eastern suburbs, you really do feel comfortable in your community and with your friends and family if you have that support," Nathaniel said.

"It's very easy to sort of not understand how the wider community views us and this marriage equality debate has really shown us that 30 to 40 per cent of the population potentially still sees us somewhat as second rate... and our relationships as second rate."

Nathaniel said the process had a big impact on his mental health and he was not the only one.

"I think we've seen a real sort of increase in anxiety and depression - and just a weight of feeling that we had gotten so far and that so many of us had felt comfortable and we were near the end of that journey - of that sort of battle to win our equality and this debate has shown us how far we still have to go," he said.

New statistics from Mental health groups indicate the LGBTQI community are feeling the impact of the debate surrounding the survey.

ReachOut Australia - who provide mental health support for young people - said it had seen a 40 per cent increase in demand for services since the survey started.

ReachOut chief executive Jono Nicholas said the increased stress came from being the focus of a public conversation, particularly with negative comments made online. A huge counting job is under way after the official deadline for the same-sex marriage postal vote.
(AAP)

"What we're hearing from young people is the nature of their anxiety is really around the public conversation itself,” Mr Nicholas said.

Mr Nicholas predicted the stress would continue beyond the announcement of the result on Wednesday.

"This will certainly lead to a sizeable minority of Australians feeling disappointed one way or the other," he said.

"We expect the public conversation to continue but also with various private members bills going before parliament this will remain a live conversation.

"We hope it can end before Christmas. I think it's important that we reach a conclusion quickly and we hope it's a positive one for young Australians."