Panamanians have created a wall celebrating their multicultural roots.

When Pope Francis, with his miter and robes, ceremoniously takes to the altar to say mass as part of World Youth Day celebrations in Panama next week, behind him will loom a giant mural its creator says bears a message against racism, a central theme of the pontiff's visit.

The mural painted by 50 novice artists - a subtle rebuke of President Donald Trump's demand for a border wall against Central American migrants - will form the backdrop to Francis's keynote mass at WYD 2019, a global gathering of Catholic youth.

No masterpiece, it's a work of heart more than a work of art. But it bears a strong message from Central American nations, according to its designer Ronaldo Domingo. 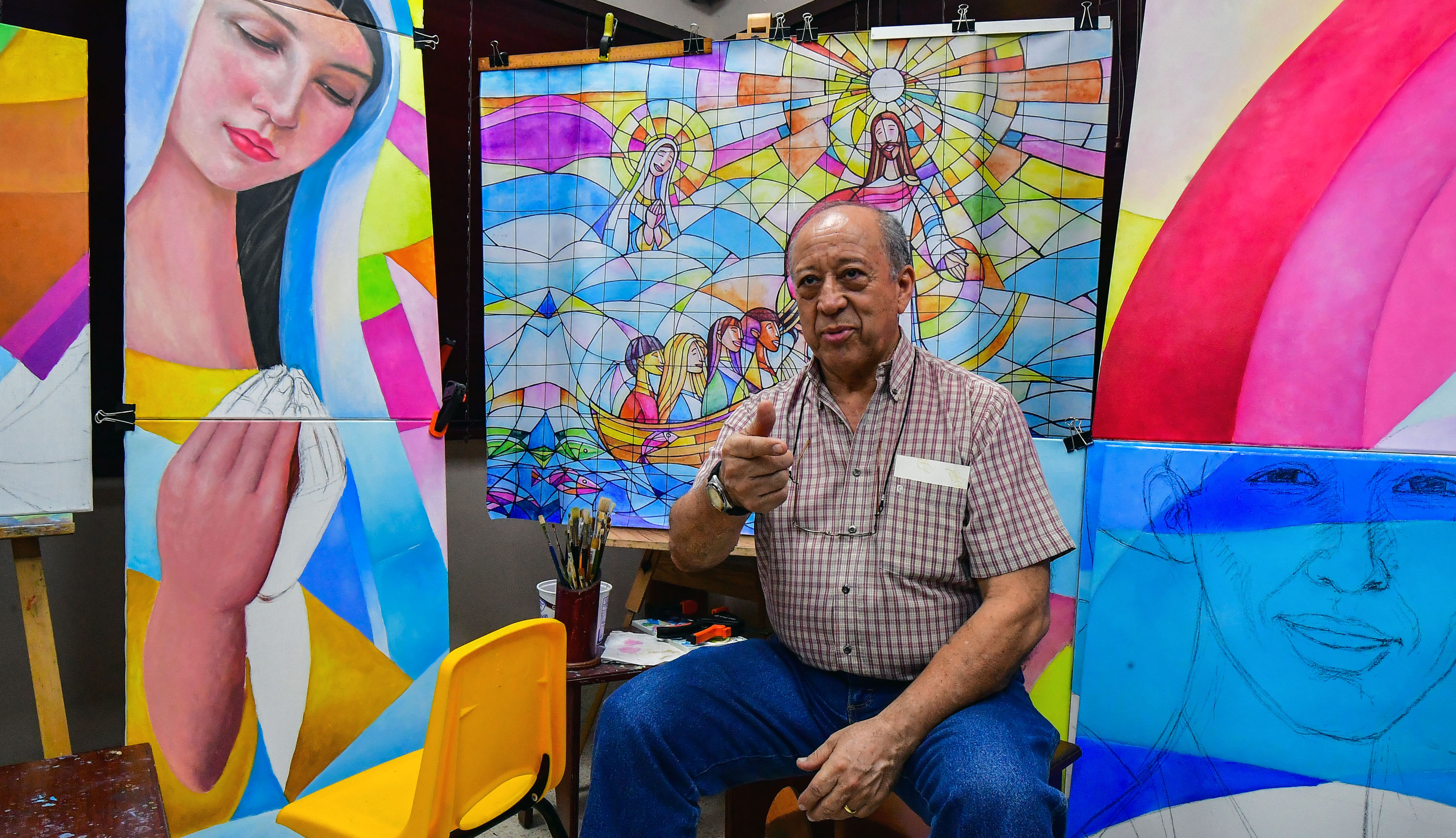 "We cannot forget our roots and our poly-ethnic origin. Panama is Chinese, Indian, Black, European. Throughout our history we have had all races and cultures present here," Domingo said.

The pope will arrive in Panama on January 23 to participate in the WYD, where he is expected to refer to xenophobia, racism and the migration crisis affecting Central Americans.

Fleeing poverty and violence, thousands of mainly Honduran, Salvadoran and Guatemalan migrants have joined several caravans heading to the United States in search of a more stable life.

The vast majority end up blocked at the US border as they run up against a determined anti-immigration drive led by the White House, that critics say has whipped up a wave of xenophobia against Central Americans.

In a cramped and humid workshop, novice painters frowned in concentration this week as they put the finishing touches to the artwork. 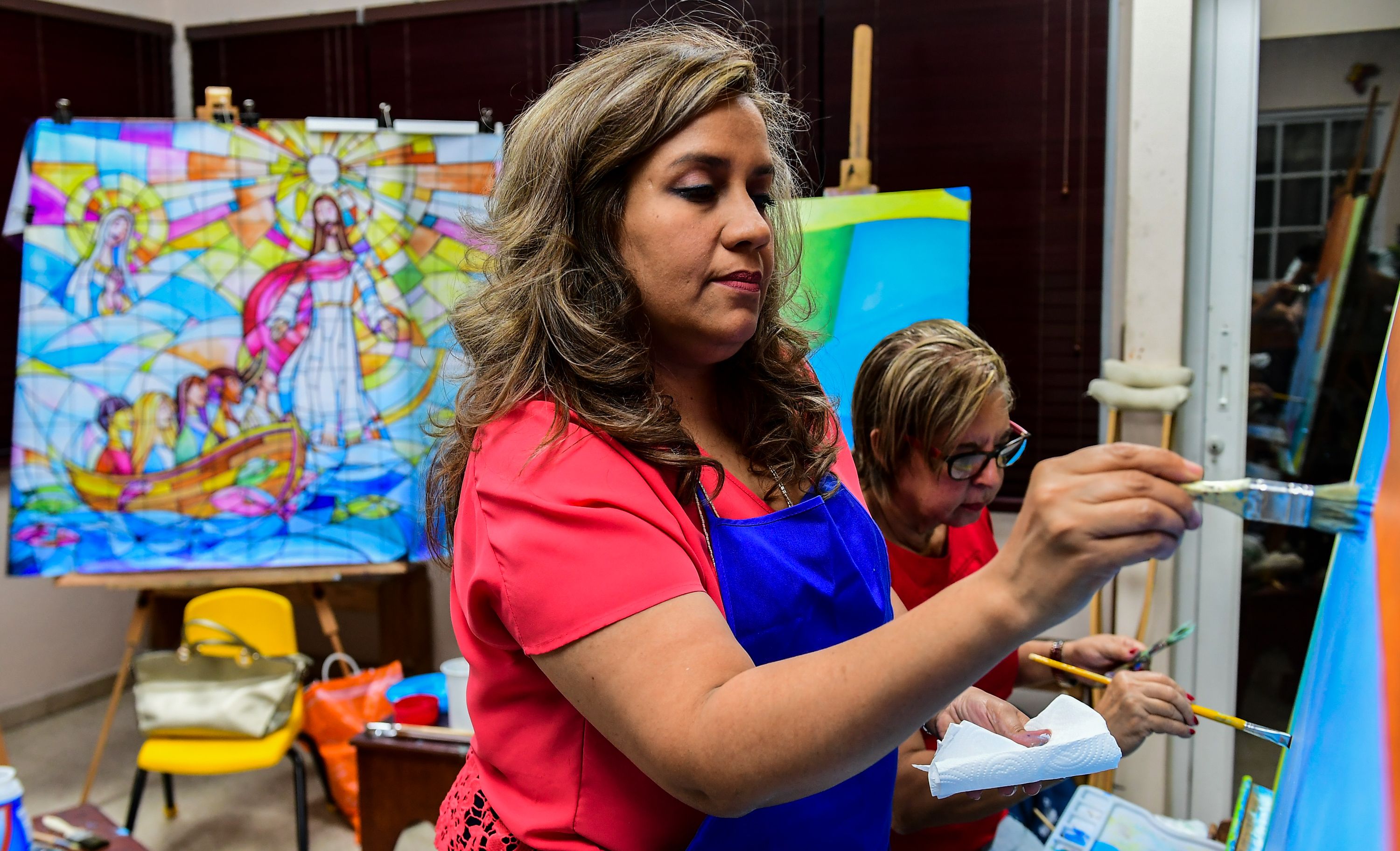 A student of Ecuadoran artist Ivan Delgado works on a panel of the wall against racism.
Getty

The group believe their painting can help raise awareness of discrimination against migrants.

Maritza Camargo adds a few more brush strokes to her canvas - one of 156 that will be assembled to form the mural - under the watchful gaze of Ecuadoran painter Ivan Delgado.

The giant 10-by-eight meter (33-by-26 feet) canvas depicts Jesus, Mary and a boat with five young people representing the five continents, interpreted by Camargo and her companions as a message against xenophobia and racism.

"We are all the same, we can all be together, because skin color, race, origin, at the end of the day it's not what makes us bigger or smaller," said Camargo.

Gabriela Perez, another of the painters, said "the pope will reach the hearts of everyone, to stop the world continuing to be filled with hatred, xenophobia and racism." Delgado, the professional overseeing the project, uses a Panamanian word to describe the Argentine pope: "Cachimbon", which means a very good man.

"He's a Cachimbon who knows how to reach people with naturalness, spontaneity and most importantly, with humility," said Delgado.

Some, like Perez, are already imagining their reaction to that moment when they will finally see the 82-year-old pontiff standing beside their mural.

"I'm sure I'll scream and let everyone around me know that I painted that hand, that foot or that little fish!" she said.