Vice President Mike Pence has told Prime Minister Malcolm Turnbull he is visiting Australia to reaffirm the strong ties between the two countries.

US Vice President Mike Pence has reassured Prime Minister Malcolm Turnbull all is well between the US and Australia.

At the start of bilateral talks in Sydney with Mr Turnbull on Saturday, Mr Pence said he and US President Donald Trump were keen to reaffirm America's strong ties with Australia during his official two-day visit.

Watch: US and Australia on North Korea 'threat'

"I bring greetings this morning from president of the United States. I spoke with him first thing and he wanted me to pass along his very best regards," Mr Pence said on Saturday.

"The president wanted me to be here early in this administration to reaffirm this strong, historic alliance between the United States of America and Australia.

"My presence here today at the president's direction is about a reaffirmation of the strong ties in both our security and our prosperity."

Mr Pence characterised North Korea as an "urgent and most dangerous threat" to peace and security in the Asia Pacific.

"While all options are on the table, let me assure you the United States will continue to work closely with Australia, our other allies in the region and China to bring economic and diplomatic pressure to bear on the regime," he said.

He echoed Mr Turnbull's calls for China to play an active role in pressuring North Korea to abandon its nuclear and missile programs.

"If China is unable to deal with North Korea, the United States and our allies will," Mr Pence said.

"We know that our security is the foundation of our prosperity."

Mr Turnbull said he was quietly confident China would step up to the mark.

Watch: US on the Australia refugee deal

Part of Mr Pence's mission while in Australia is to smooth any ruffled feathers caused by Mr Trump who blasted Mr Turnbull over an asylum seeker settlement plan during their now notorious phone call shortly after Mr Trump's inauguration in January.

Mr Turnbull opened the bilateral talks at Admiralty House by speaking of how the relationship between Australia and the US stretched back to the battlefields of World War One.

"We are very honoured you are visiting us here so early in the term of new Trump administration," he said.

"It is the earliest visit by a vice president in a term of a new administration in history.

"So we recognise that that means more than ever your commitment to our alliance.

"An alliance 60 years standing and began nearly a century ago when Australian and American troops went into battle in the first world war.

"Since then ... Australia has stood shoulder to shoulder with the United States in every major conflict in the past 99 years."

Mr Turnbull said both countries were still fighting side by side in the Middle East standing up for shared values of freedom and democracy.

"That's what binds us together that history and our commitment today that our alliance is more important than ever.

Earlier Mr Pence, his wife Karen and their daughters Charlotte and Audrey joined Mr Turnbull and his wife Lucy and their family for a relaxed morning tea at neighbouring Kirribilli House on Sydney Harbour.

Mr Pence joked about how much his wife had enjoyed spending time with Mr Turnbull's grandchildren.

"My wife was extremely impressed with your grandchildren, we don't have any yet," he said to laughs in the room.

Mr Turnbull said : "But she nursed little Alice so wonderfully. Daisy said she'd welcome her to take over babysitting."

The men and senior government officials are expected to discuss regional security and trade issues before addressing the media.

Mr Pence was also greeted at Admiralty House by Governor-General Sir Peter Cosgrove who also praised the long-standing ties between Australia and the US.

Australia's ambassador to the US, Joe Hockey, and the acting US Ambassador to Australia, Charge d A'ffaires James Carouso were also at that meeting.

Sir Peter told Mr Pence of how the relationship can be traced back to the battlefields of WWI in France when General John Monash had two US regiments under his command at the battle of Hamel.

"The relationship between our two nations is as strong today as it has been since the first time we saw each other on the battlefield," Sir Peter said.

Security was tight for Mr Pence and his entourage, with a large police contingent patrolling the streets while police helicopters hovered overhead.

Sydney's famous Harbour Bridge was closed so Mr Pence's motorcade could make the short trip from his luxury hotel in the city's CBD to Kirribilli.

Mr Pence and Mr Turnbull are due to address the media at 11.30am.

The pair will then be joined by senior government ministers and business leaders including Qantas boss Alan Joyce for a lunch in the gardens of Admiralty House.

Mr Pence will end his day of official engagements by meeting Opposition Leader Bill Shorten and business leaders in the city. 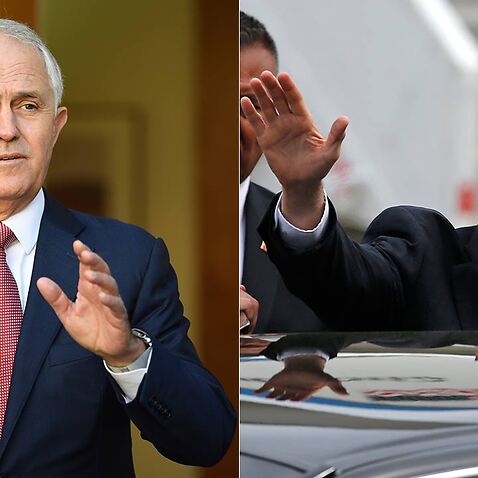