Speaking in Sydney, Vice President Mike Pence reassured his Australian counterpart that the controversial refugee settlement deal will go ahead.

Vice President Mike Pence has reaffirmed that the Trump administration will resettle refugees in limbo on Nauru and Manus Island.

President Donald Trump blasted Prime Minister Malcolm Turnbull over the settlement plan during their now-notorious phone call shortly after his inauguration in January.

Mr Pence reassured Mr Turnbull during their bilateral meeting the US intends to honour the agreement, struck with the former Obama administration. "It doesn't mean we admire the agreement," he told reporters in Sydney on Saturday.

He said the process for fulfilling the agreement had been initiated, subject to the results of vetting processes that now apply to all refugees in the US.

"The decision to go forward can rightly be seen as a reflection of the enormous importance of the historic alliance between the United States and Australia," Mr Pence said.

Mr Turnbull thanked him for the commitment and said it spoke volumes of the integrity of Mr Trump.

.@MikePenceVP says US will honour the refugee resettlement deal but it "doesn't mean we admire the agreement @SBSNews

Both men declined to put a number on how many refugees would be resettled under the plan.

US Homeland Security officials have been on Nauru and Manus Island in Papua New Guinea to do fingerprinting and security interviews with refugees in the past few weeks.

At the start of the bilateral talks in Sydney, Mr Pence also said he and President Donald Trump were keen to reaffirm America's strong ties with Australia.

"I bring greetings this morning from president of the United States. I spoke with him first thing and he wanted me to pass along his very best regards," Mr Pence said on Saturday.

"The president wanted me to be here early in this administration to reaffirm this strong, historic alliance between the United States of America and Australia.

"My presence here today at the president's direction is about a reaffirmation of the strong ties in both our security and our prosperity."

Part of Mr Pence's mission while in Australia is to smooth any ruffled feathers caused by Mr Trump who blasted Mr Turnbull over an asylum seeker settlement plan during their now notorious phone call shortly after Mr Trump's inauguration in January.

Mr Turnbull opened the bilateral talks at Admiralty House by speaking of how the relationship between Australia and the US stretched back to the battlefields of World War One.

"We are very honoured you are visiting us here so early in the term of new Trump administration," he said.

"It is the earliest visit by a vice president in a term of a new administration in history.

"So we recognise that that means more than ever your commitment to our alliance.

Watch: US and Australia strong together

"An alliance 60 years standing and began nearly a century ago when Australian and American troops went into battle in the first world war.

"Since then ... Australia has stood shoulder to shoulder with the United States in every major conflict in the past 99 years."

Mr Turnbull said both countries were still fighting side by side in the Middle East standing up for shared values of freedom and democracy.

How does the government's US refugee deal work?

* Priority will be given to women, children and families

* Does not extend to people found not to be refugees

* Vice-President Mike Pence reaffirmed the Trump administration's reluctant commitment to the deal, during his visit to Australia on Saturday. 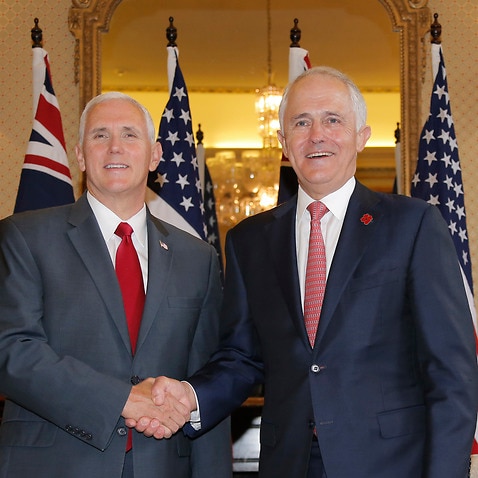 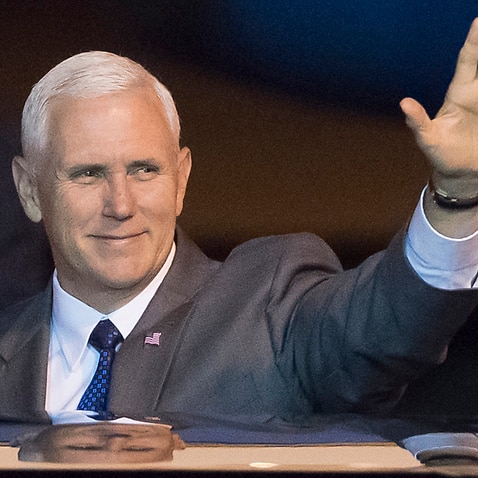 Pence reinforces US ties with Australia