Peter Dutton has defended the plan to transfer Australians from China to quarantine facilities on Christmas Island. 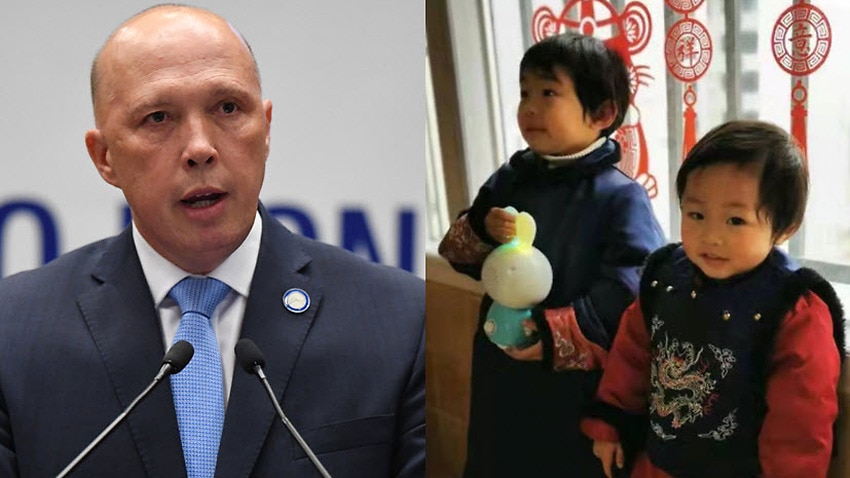 Peter Dutton has defended a plan to send Australians stuck in Wuhan, including these two boys, to Christmas Island. Source: AAP/Supplied

Home Affairs Minister Peter Dutton has defended the government's plan to quarantine coronavirus-affected Australians on Christmas Island, amid calls for a more “humane” solution to be found.

The federal government announced on Wednesday that it was preparing to evacuate hundreds of Australians trapped in the Chinese city of Wuhan and its surrounds, and keep them on Christmas Island in quarantine for two weeks.

While the United States and Japan have already flown some of its trapped citizens home, Australian diplomats are continuing negotiations with Chinese authorities to clear the way for the operation.

The plan came as a surprise to some Australians stuck in the city, who questioned the long quarantine period given they had already isolated themselves for days.

But Mr Dutton said the government was following medical advice and the plan was in "the best interest of Australia and Australians".

“The reality is people need to be accommodated for somewhere for up to 14 days. I can't clear out a hospital in Sydney, Melbourne or Brisbane,” Mr Dutton told reporters in Canberra.

“Christmas Island is purpose-built for exactly this scenario.”

Dr Bartone said he was happy with the government's overall response to the coronavirus outbreak, but not the use of Christmas Island as a quarantine area.

“I agree with the principle, but we can find a better set of facilities to deal with that, to manage that staged return to the community,” Dr Bartone told the Nine Network.

“We can protect the Australian community and also be much more humane to those Australians who, as I said, through no fault of their own, find themselves the focus of this epicentre.”

Dr Bartone, a critic of Australia’s offshore immigration detention policies, said the AMA was not consulted about using Christmas Island as part of the coronavirus response.

“We feel that the repatriation to Christmas Island, to a place where has been previously the focus of populations under enormous mental and physical trauma and anguish, is not a really appropriate solution,” he said.

Mr Dutton gave a bullish response when he was later asked by reporters about Dr Bartone's comments.

“Look, I think the President of the AMA is an excellent doctor, but I think he's got a membership, at least in part, that has had a long-standing opposition to Operation Sovereign Borders,” Mr Dutton said.

People to pay for evacuation flight

The Australian government is expected to charge citizens evacuated from Hubei for the flight to Christmas Island.

"That is, as I'm advised by DFAT, the normal way in which these things occur and that will be the limit of the contribution," Mr Dutton said.

On Thursday, the Sydney Morning Herald reported that Australians in Wuhan said they had been told they would have to pay $1,000 and sign a waiver allowing them to be quarantined to be allowed on the flight.

“Australians departing on any flight arranged by the Australian Government will be flown to Christmas Island to undertake a period of quarantine of up to 14 days based on current medical advice, as a condition of their assisted departure,” a government statement said on Wednesday.

“They will also be required to commit to making a contribution to the cost, consistent with normal arrangements in these circumstances.

“This will ensure we are also prioritising public health in Australia.”

SBS News has contacted the Department of Foreign Affairs and Trade (DFAT) for clarification.

The government will prioritise getting children and older people out, but authorities say they will only take people who are well and not showing symptoms of the virus.

How are other countries conducting evacuations?

Other countries, including the United States and Japan have already evacuated some virus-affected nationals from China.

A United States charter flight from Wuhan with about 210 people on board, including consular staff, was met at a California military base on Wednesday by emergency vehicles with flashing lights and personnel in white biological hazard suits.

The evacuees will be monitored for symptoms and sent to local hospitals if they are found to be ill, the Pentagon said.

More than 200 Japanese nationals were brought home on Wednesday, but only a handful of them were hospitalised for tests after they reported they felt unwell or showed flu-like symptoms.

Some 250 French citizens and 100 other Europeans will be flown out of Wuhan this week.