Queensland's new treasurer says the state is a serious contender to rescue Virgin Australia, but the federal government has ridiculed the idea. 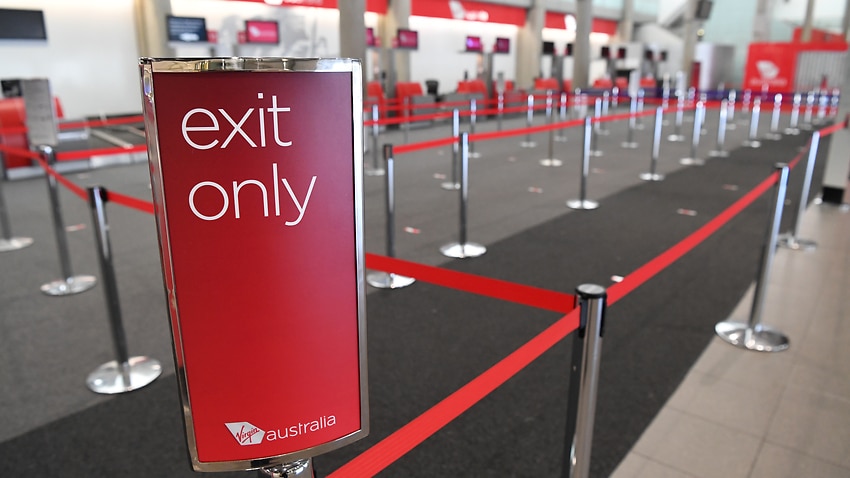 The federal government has ridiculed Queensland's bid for a stake in Virgin Australia, branded "Project Maroon" by the state's new treasurer.

But he hopes to get the carrier on the cheap.

Virgin Australia planes are lined up at departure gates at Sydney Airport in Sydney. Source: AP

"They've got to take a bath if we're going to go forward on this."

The state-owned funds management group Queensland Investment Corporation will advise the government on its bid, which could take the form of a direct equity stake, a loan, guarantee or another financial tool.

Home Affairs Minister Peter Dutton said it's laughable to consider using taxpayers' money to buy an airline in the middle of a global aviation crisis.

Premier Palaszczuk has almost bankrupted Queensland, and now in the middle of a crisis they want to buy an airline. It is laughable. She “leads” a government which is corrupt and chaotic.

"Premier (Annastacia) Palaszczuk has almost bankrupted Queensland, and now in the middle of a crisis they want to buy an airline," tweeted the federal MP, who holds the Brisbane seat of Dixon.

"It is laughable. She 'leads' a government which is corrupt and chaotic."

Mr Dutton said the proposal was a dangerous political stunt by Ms Palaszczuk.

"She's putting Queensland on a path to economic disaster, and every credit card that Annastacia Palaszczuk has as the Queensland premier is maxed out," he told the ABC.

Mr Dick fired back telling Mr Dutton to "just stick to cruise ships" - a reference to the botched arrival of the coronavirus-ridden Ruby Princess in Sydney.

"The Queensland Investment Corporation is very experienced and it has substantial resources. Airlines like Virgin Australia should be seen as an essential service," he told SBS News.

"Regional areas - particularly in Queensland - are also very dependent on having an airline service."

However, Professor Bamber said a series of tight conditions would be needed to ensure taxpayers got value from any government bid.

The federal government has refused to bail out Virgin Australia, and Deputy Prime Minister and Transport Minister Michael McCormack said the solution must be market, not government, led.

NSW Premier Gladys Berejiklian says her state won't be making a bid for the airline, and its fate should be left to the private sector.

"If the private sector is going to come in and support that airline, that's a fantastic outcome."

But Mr Dick says it would be irresponsible for the Queensland government not to have a crack at saving the nation's second airline.

"Regional Queensland was crushed when Ansett went under," he said.

"There is a lot of interest in Virgin Australia. Some of them aren't necessarily going to put Queensland interests first."

"We are well-equipped to manage the state's interest in Virgin Australia Holdings should the consortium be successful," Mr Frawley said in a statement on Wednesday.

Mr Dick said the airlines' administrators, Deloitte, are seeking to conclude the sale process by June 2020, and Queensland is a serious contender.

Flight Centre chief executive Graham Turner has backed Queensland's move, and says there's no reason why two airlines can't be profitable if they are properly run.

"I see nothing wrong with it and I think it's probably a very positive thing for Queensland," he told ABC radio.