Peter Dutton says extremist “lunatics” must be dealt with regardless of their ideology.

Home Affairs Minister Peter Dutton has referred to the need to deal with "left wing lunatics" in response to warnings from Australia's top intelligence officer about right-wing extremism.

While the ASIO director-general did not mention any threat from left-wing groups in his speech, Mr Dutton said security agencies were working to deal with the threat posed by extremism at both ends of the political spectrum.

“If the proliferation of information into the hands of right-wing lunatics or left-wing lunatics is leading to a threat in our country, then my responsibility is to make sure our security agencies are dealing with it and they are,” he said. Peter Dutton says he doesn't care if extremism comes from the far right or far left it must be dealt with.
AAP

But Mr Dutton said all extremism must be stamped out irrespective of the ideology behind it.

“If somebody is going to cause harm to Australians, I just don’t care whether they’re on the far right, the far left or somewhere in between, they will be dealt with,” he told reporters on Tuesday.

Mr Burgess said cells of neo-Nazis were meeting regularly in suburbs across the country and increasingly sharing their hateful ideology online. 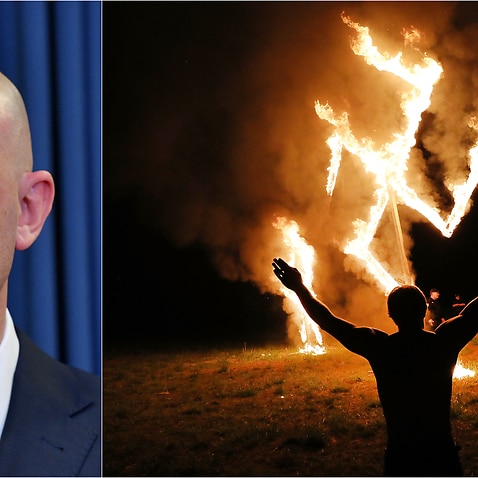 On 15 March, an Australian man allegedly murdered 51 people in a shooting spree at two mosques in the New Zealand city after sharing a white supremacist manifesto online.

As the one-year anniversary of the tragedy approaches, Labor MP Tim Watts questioned how much the government has done enough to change its response to the threat.

“Sadly, I believe that the honest answer is not enough.” No right-wing extremist groups have been listed as a terrorist threat in Australia.

The head of Australia’s national security organisation also highlighted the threat from foreign espionage, which he said was now higher than it was at the height of the Cold War.

While the Federal Government and ASIO have been hesitant to identify where these threats are coming from, China has previously been singled out.

Centre Alliance Senator Rex Patrick said the government should be willing to call out countries to blame.

"Look it's likely to be China," he told reporters.

"I don't think anyone would be surprised by that and the government should simply state that is the case.

"That's part of public awareness, but also puts pressure back on China, that this is not acceptable and will be called out."

Mr Dutton said new laws could be considered to deal with unprecedented levels of foreign interference.

“If the agencies need more laws we’ll provide that support because this is a very serious threat,” he said.