A poignant photo of a Queensland woman's dying wish to see the beach one last time has gone viral.

The two Queensland paramedics who granted a palliative patient a wish to see the ocean one last time have been humbled by the worldwide attention.

Graeme Cooper and Danielle Kellan, from Hervey Bay, were taking a woman to the palliative care unit at the local hospital when she asked them to see the ocean.

The Queensland Ambulance Service said "tears were shed" and the patient was "ecstatic".

"This story told to us by Helen Donaldson, the officer-in-charge of Hervey Bay, is too good not to share," the QAS wrote on its Facebook page.

"A crew were transporting a patient to the palliative care unit of the local hospital and the patient expressed that she just wished she could be at the beach again.

"Above and beyond, the crew took a small diversion to the awesome beach at Hervey Bay to give the patient this opportunity – tears were shed and the patient felt very happy.

"Sometimes it is not the drugs/training/skills (sic) – sometimes all you need is empathy to make a difference! Great work Hervey Bay team Danielle & Graeme the Service is very proud of you."

Mr Cooper said the woman had lived with her husband by the beach in Hervey Bay. 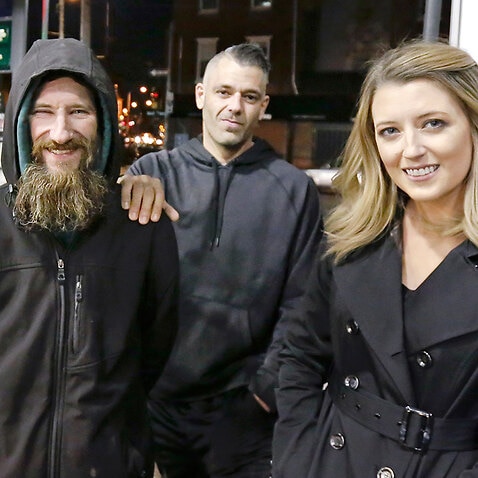 Woman raises $78,000 for homeless man who helped her buy petrol

"She was just ecstatic."

The story has been reported worldwide making headlines in Britain, Wales, Scotland, England, Germany, Canada and across the United States.

Sascha Steingrobe, a German working as a paramedic for the QAS, commented on Facebook claiming paramedics granting a palliative patient's request is called: "The last wish ambulance."

Facebook has seen an influx of other people - including paramedics - talking about their examples of similar heartwarming stories.

Paramedic Darren Booker wrote: "Years ago a fellow crew member and I had a situation where the patient was taking her last ride home.

"She asked to see the beach one last time. After going the beach and opening the rear door, we asked her if would like an ice cream, to which she replied 'yes' with a giggle of delight.

"A short time later the hardly licked ice cream fell to the floor.

"The patient had passed away. As she lay there still smiling at the last view that she ever saw, we had a minutes silence for her. Although the memory is an old one, it is still vivid. Great work by this crew, well done guys and girls."

Another user wrote: "Brilliant idea! I am European and there is nothing like this in my home country. However it's amazing idea to give a people nor only medical support but also social, peer support, encouragement and shared joy [sic]."

"Just read this story on Metro UK [Facebook] page..... well done folks, above and beyond the call of duty but such a wonderful thing you did for that terminal patient," a Facebook user wrote.

"Read this story in a German newspaper today. Awesome dedication that goes ways beyond simple service. 2 thumbs up to those 2 [sic] and all in service for the community! Way to go," another social media user wrote.