The cleaning industry is critical to Australia's response to the COVID-19 pandemic, putting those on the frontline under extreme pressure. 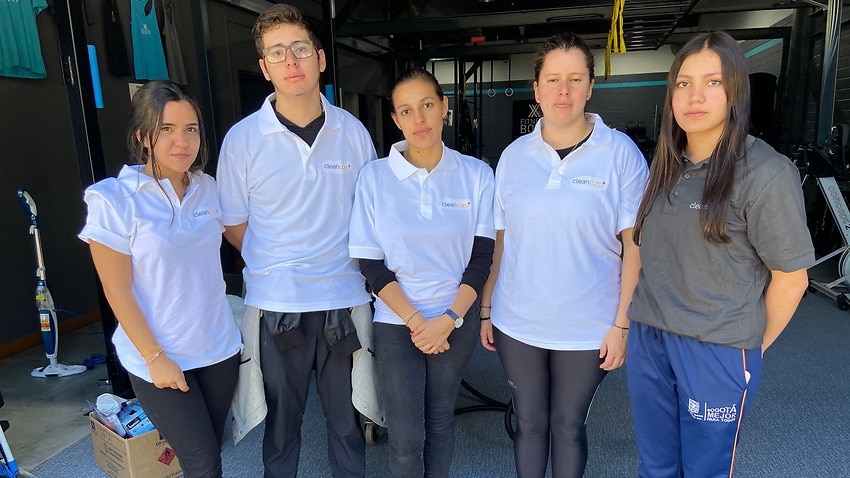 Commercial cleaning crews are on the front lines of the battle against coronavirus. Source: SBS

Australian professional cleaners are calling for better protection and job safety guarantees as demand increases for their services to help control the coronavirus pandemic.

Hela Mejri is the operations manager of Cleancorp, a company which cleans business premises in Australia and New Zealand.

With surfaces a key transmission point for the disease, she said workers are under pressure to protect others as well as themselves from COVID-19.

“It’s been very busy, we jumped from working eight hours a day to almost 24 hours, seven days a week," she said.

Cleaners are being hired to scrub down surfaces where pathogens might live. Source: SBS

“We’re now cleaning every surface as soon as clients have touched it, so we actually have spray bottles for the clients during group training sessions," he said.

Read More
Australia adopts new measures to slow COVID-19, but some doctors say they're not enough

But not all commercial cleaners are taking the same extra safety precautions.

Aoun Akut has been a school cleaner in western Sydney for a decade and said his employer only provides disposable gloves for him to wear while on the job.

"For me, it’s very dangerous. I’m afraid. Cleaners, we need to be protected," he told SBS News.

As a single father, Mr Akut said he is also concerned about what will happen if schools are closed indefinitely.

"If we are not being paid we will be affected, how are we going to pay our rents and the food we eat?"

Australia's cleaning workforce relies heavily on international students and migrant workers with 48 per cent of commercial cleaners foreign nationals, according to the Australian Bureau of Statistics 2016 Census.

“Here, we don’t rest very much and we try to find jobs that finance our basic needs and all the debts that we obviously have to be able to live here," Colombian student Miguel Quiroz told SBS News.

Mr Quiroz said he backed calls for the government to extend cleaners' allowed work hours to meet the huge demand.

Currently, international students in Australia can only work for up to 20 hours per week while school or university is in session.

Earlier this week, Prime Minister Scott Morrison waived the restriction for supermarket workers and international student nurses and said the government is considering broadening it to include other professions.

The United Workers Union, which represents cleaners, said they are an  "essential but invisible workforce".

"They often don’t have a relationship with the people for whom they are performing their duties," UWU organiser Georgia Potter Butler said.

She said there are also concerns a shortage of supplies due to panic buying could put further jobs at risk.

"Trying to source it (cleaning supplies) from wholesalers when everyone's doing the same thing - it's the same as with the toilet paper in the supermarket," she said.

"If we want our cleaners to be doing a better job, we need to make sure they have the time, equipment and training to do it."