Six Qantas baggage handlers working at Adelaide Airport have tested positive for the coronavirus, with about 100 others to be investigated.

About 100 other baggage handlers are now being investigated and a large number are expected to be forced into quarantine. She said the airline would be contacted on the deep cleaning of the area that would be required and any passengers who arrived on flights in the past few days were advised to wipe their baggage.

There were no concerns for other areas of the airport.

"This is a serious situation," Professor Spurrier said.

"We've met with Qantas and we're looking at implementing some workarounds to ensure baggage can be off-loaded." 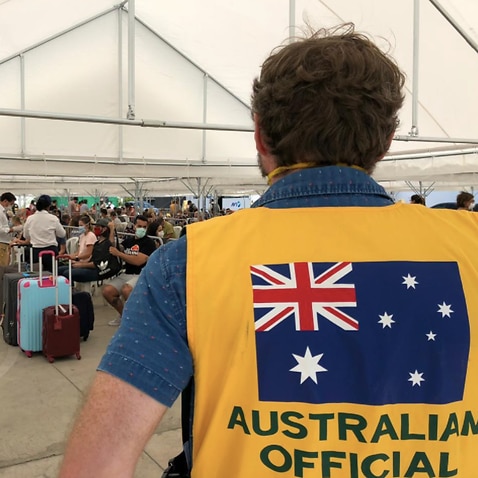 The Transport Workers Union said they are trying to find out what protections are in place for other workers that had contact with those infected.

The union slammed the airline's preparedness to tackle the virus, claiming the way Qantas handled COVID-19 has left workers exposed to risks.

"Qantas is acting like a corporate bully, refusing to listen to its workers concerns about safety," TWU National Secretary Michael Kaine said. "Qantas instead shut workers down when they raised their voices."

In a statement provided to SBS News, a Qantas spokesperson said the airline has been doing all it can to provide a safe and secure environment for both its employees and customers.

"We’re working with SA Health who are conducting a thorough tracing process for each of the confirmed cases," they said.

"Other employees who may have had contact with these employees will be required to self-isolate for 14 days.

"We are working to minimise any disruptions to customers who are flying in and out of Adelaide, although passenger numbers are significantly reduced due to government travel restrictions." Qantas says it is working with health officials.
AAP

The airport issue came as 32 new cases were reported in SA on Tuesday, the first increase after three days of falling numbers.

That brought the total cases to 337 of which 104 were linked to cruise ships.

Eight people remain in intensive care with five of those listed as critical.

Prof Spurrier said the increase in cases showed that the numbers would jump around as the pandemic continued and emphasised the importance of restrictions put in place to slow the spread of the virus.

"The social distancing, the quarantining, the hygiene, all of these things need to be kept up," she said.

For more information go to https://t.co/mYnZsGpayo or contact the South Australian COVID-19 Information Line on 1800 253 787. pic.twitter.com/2kpTzlUGN9

"We've got to keep our foot down, not on the accelerator but on the brake.

"It was wonderful to have small numbers yesterday and the day before but, obviously, this is still a big issue in our community."

However, Premier Steven Marshall said the state was not at risk of running short, despite reports of some hospitals using six months of normal supply in one week.

"There is no suggestion that we don't have enough PPE in South Australia," the premier said

"What we've got to do in these unprecedented times is make sure that we have an effective way of getting them to people on the front line."

To keep better track of stocks of face masks South Australia will trial the use of a vending machine in one hospital this week that will allow for real-time tracking of supplies.

An agreement has also been struck with Adelaide packaging company Detmold to produce 145 million surgical masks in the coming months at its Adelaide operations, 45 million for SA and 100 million for the National Medical Stockpile.

Detmold will employ an extra 160 people and invest more than $1 million in the new operations with production expected to start in May.