Queensland's Annastacia Palaszczuk says premiers should work together on domestic violence when they next meet for COAG in November.

An abusive Queensland police officer has been fired for committing acts of domestic violence.

Allegations against the 41-year-old senior constable from the South Eastern Region became the subject of disciplinary proceedings conducted by Deputy Commissioner Steve Gollschewski and were found to be substantiated.

In addition to the domestic violence, the officer had also made abusive and threatening phone calls, accessed confidential information, and failed to treat members of the community with respect and dignity, the Queensland Police Service said on Friday afternoon.

Premier calls for a national approach to domestiv violence

Queensland Premier Annastacia Palaszczuk is calling for a national approach to tackle domestic violence, following a spate of horrific attacks in her state.

Ms Palaszczuk has essentially offered a blank cheque to domestic violence services and promised to fast track legislation following the deaths of two women on the Gold Coast in the past two days, as well as that of a six-year-old Brisbane girl.

She says Australia's federal and state governments needed to "work together as one" on the issue and called on state premiers to look at best practice from across the country when COAG next meets in November.

"I don't think it's good enough now to say we're going to put money into ... an anti-domestic violence national campaign," she said on Friday.

"No more talking, we need action out on the ground."

Like most Queenslanders, I’ve been horrified by news events this week. Enough is enough. https://t.co/fT1Q5SStYD #notnownotever #qldpol

The Queensland government has promised to adopt or support all 140 recommendations from a domestic violence taskforce report handed to the premier in February, which included a proposal for a new criminal offence - non-lethal strangulation.

She said DV Connect Chief Executive Di Mangan was putting together a proposal for where the funding would be directed.

Australia is in the grip of a national domestic violence crisis and much more must be done to stop women being murdered, Labor frontbencher Anthony Albanese says.

Queensland is reeling from a spate of shocking domestic violence attacks this week, including the death of Gold Coast mother Tara Brown.

Ms Brown was brutally bashed in her crashed car, allegedly by her former partner who she'd gone to police about. 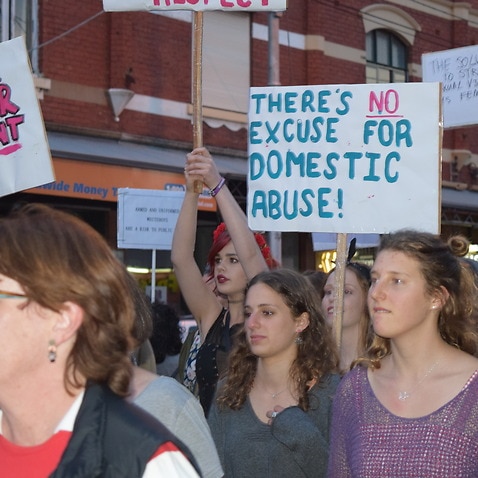 He almost killed me: Domestic violence victims speak about their 'silent hell'

Earlier, Labor frontbencher Anthony Albanese said Australia is in the grip of a national domestic violence crisis, and it's time for the country to step up.

"It is beyond belief that a woman could go into a police station, show those police officers the text messages that clearly indicated that there was a very real threat to her and she was turned away," Mr Albanese told the Nine network.

"There is something fundamentally wrong with the system when that can happen to Tara Brown and she has been let down."

The day after Ms Brown died in hospital from horrific head injuries a 49-year-old woman, who'd run screaming into a McDonald's outlet on the Gold Coast, was shot dead in front of terrified staff and diners.

The woman's ex-partner, who is accused of the horrific attack on Thursday, died in hospital on Friday.

Also on Thursday, neighbours were forced to step in to save a Brisbane woman who was being attacked with a machete allegedly wielded by her former partner.

Government frontbencher Christopher Pyne defended domestic violence spending, after he was asked about women's refuges closing and calls to helplines going unanswered due to a lack of funding.

"We need to spend whatever is required to stamp out domestic violence. So I don't think we should skimp on the funding," he said.

But he said cultural change was also required, alongside a focus on the things that give rise to domestic violence, such as drug and alcohol abuse.

"All of these things need to happen. All governments need to work together to make them happen."

A senior Queensland policeman was also stood down on Friday following allegations of domestic violence.

Queensland Police issued a statement that the Senior Constable from the South Eastern Region was dismissed "as a result of disciplinary proceedings".

It went on to state that the 41-year-old man had been the subject of a disciplinary hearing where allegations of serious misconduct were found to be substantiated.