A giant sinkhole at a Queensland camping spot is now relatively stable and may have actually been a landslide, a geotechnical engineer says.

About 300 campers were evacuated from Inskip Point near Rainbow Beach on Saturday night after the large cavity opened up and swallowed a caravan, car, trailer and tents. 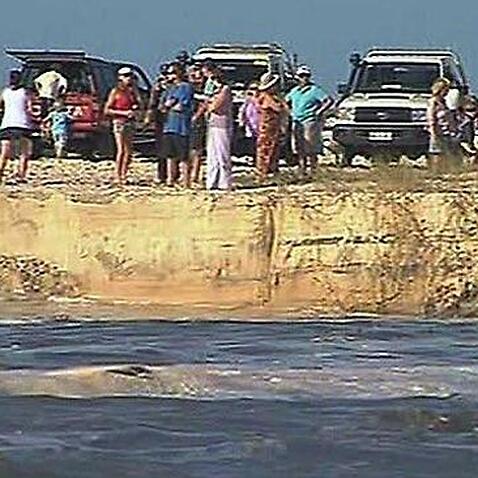 "Preliminary advice is that the event may have been a 'near shore landslide' rather than a true sinkhole," the Department of National Parks said in a statement on Monday.

The cavity is now about 200 metres long, 50 metres wide and up to nine metres deep.

A geotechnical engineer also advised the site is now relatively stable, with a flat beach edge forming. Coastal erosion is still occurring, so more trees may fall down, and the exclusion zone has been expanded by 200 metres for safety reasons.

Camping grounds on either side of the site remain closed and the public has been urged to avoid the area, observe traffic barriers and warning signs.

All the school holiday campers escaped and no injuries were reported. Geotechnical engineer Allison Golsby said the area has a history of sinkholes and should be closely monitored to warn of any further disasters.

She also said scientific reports indicate the entire peninsula could eventually fall away.

"People have said that at some stage they think Inskip Point may not be there," she told ABC radio. "Now that could be thousands of years; it could be hundreds of years."

Allison Golsby says sinkholes occur regularly at the area at Inskip Point, near Rainbow Beach, and campers should be forewarned.

"The ideal answer is it's great to monitor because then we keep everybody in the right place and they won't be put in a position like that," she told ABC radio.

The hole could be linked to a number of small earthquakes in the region in recent weeks.

In 2011 a similar sinkhole, which also resulted in no injuries, emerged at the same campsite.