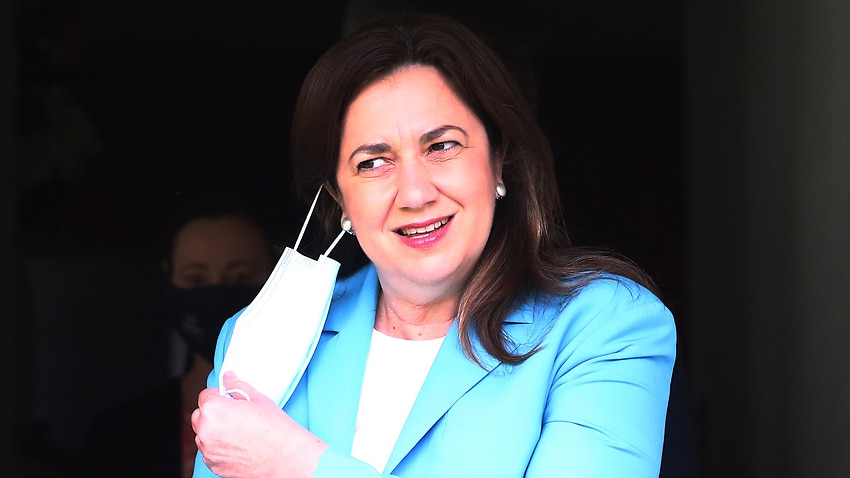 Premier Annastacia Palaszczuk says when Queensland hits the target, or on 17 December at the latest, businesses and hospitality venues will be able to operate without any COVID-19 restrictions provided all staff and partons are fully vaccinated.

Unvaccinated people will be barred from hospitals, aged care and disability care facilities - except in emergency or end-of-life situations - once 80 per cent of Queenslanders are vaccinated.

"This is both a reward for the fully vaccinated and a proportion for when the borders open and we will see more more cases in our community and people deserve to know that they can go to these places and that they are safe," Ms Palaszczuk told reporters on Tuesday.

"So this is our next step in keeping Queenslanders safe."

BREAKING: Fully vaccinated Queenslanders will be rewarded to keep our freedoms from 17 December or when we reach the 80% double dosed milestone. #covid19 pic.twitter.com/WICAlLvxl0

It's also been announced Queenslanders won't have to wear face masks at all once 80 per cent of residents have had a first dose of a COVID-19 vaccine later this week.

Commonwealth figures show at least 79.6 per cent of Queenslanders 16 years and over have had their first dose and 67.4 per cent are double-dosed.

Queensland recorded no new locally-acquired cases of COVID-19 on Tuesday and one in hotel quarantine after 8,121 tests.

It comes as the territory's cluster grew by one new case to four after a close contact of the index case fell ill in quarantine.

Mr Gunner says the "new case was not a threat" and the lockout will end as planned at 11.59pm on Tuesday.

He said the man had been in quarantine for his entire infectious period and there were no new close contacts or exposure sites linked to the case.

"I'm also pleased to be able to report that all of the other indicators in Greater Darwin are excellent," Mr Gunner told reporters.

Read More
Australia is rolling out COVID-19 booster shots. Here's when to book yours

Wastewater testing has returned negative for the virus, and two pubs and a restaurant the source case visited have been downgraded from close contact to casual contact sites.

"So with all of the above factors in mind, we can move out of the Greater Darwin lockout with confidence that we've traced and tracked the virus," Mr Gunner said.

Face masks will need to be worn until 5pm on Friday in most public places.

Victoria’s health department confirmed on Tuesday the state is managing 15,607 active cases. It was also the sixth day in a row that Victoria has recorded a number above 1000.

There are 579 Victorians in hospital, of whom 90 are in intensive care including 55 on ventilators. The seven-day hospitalisation average has fallen by 13 to 615.

The state government says rapid tests will be trialled by up to 20 outbreak-stricken schools, before being rolled out to all schools across the state from 15 November.

The approved at-home tests, part of a stockpile of 200,000 secured by the state government, will be offered to unvaccinated students deemed primary close contacts of a positive case at school.

It will allow students to return to face-to-face learning after seven days in isolation, rather than the current requirement of 14. But they will still need to provide a negative PCR test on day six and return a negative rapid test before school from days eight to 14 after exposure.

In NSW, there are 254 people in hospital, with 42 in intensive care and 20 on ventilators.

An unvaccinated woman in her 90s has become the ninth death linked to an Albury aged care home. A woman in her 80s who had received one vaccination dose has also died as well as two unvaccinated men, one in his 80s and another their 50s.

All three were from southwestern Sydney. NSW's death toll stands at 604.

Cases are continuing to rise in the Hunter New England, which recorded another 62 cases. Murrumbidgee had the second-most cases for a single district with 33.

Eighteen new cases have been found in the ACT, as it's announced nightclubs in Canberra can reopen and visitor limits at home will be scrapped sooner than expected.

There is one person in hospital who is on a ventilator in intensive care.

Of the new cases reported, the median age of cases was just 15, driven by a large number of infections reported in Canberra schools.

The ACT government has brought forward the easing of COVID-19 restrictions by two weeks due to the ACT's high vaccination rate, which has passed 95 per cent.

From midnight on Friday, indoor and outdoor entertainment venues can host events with 100 per cent capacity, while restrictions on cinemas and swimming pools will also be relaxed.

Limits have been scrapped for visitors to the home or informal outdoor gatherings.

More people will be allowed in pubs, cafes, restaurants and retail with density restrictions eased to one per two square metres.

Density limits will no longer apply to outdoor spaces. Nightclubs will also be able to reopen with dancing permitted, while punters will be able to drink while standing up.

Face masks will only be required in high-risk settings such as aged care, hospitals, public transport and in schools.

However, the government is still urging Canberrans to wear face masks in crowded settings.

The measures will remain in place over the Christmas period and will be reviewed by health authorities in late January.