Queensland will begin a new vaccination blitz in border towns to prevent the importation of COVID-19 cases from NSW. 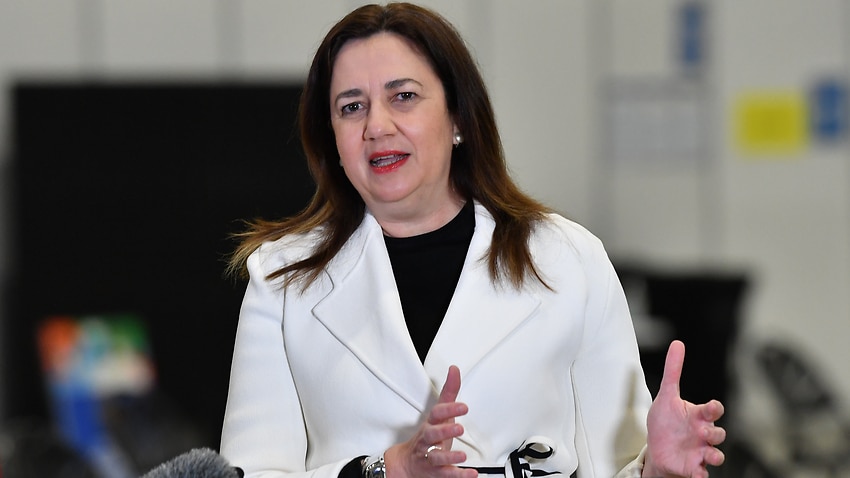 The Queensland government will hold urgent talks with border-town mayors in a bid to boost vaccination rates and stop NSW cases creeping into the state.

Queensland recorded 10 new local cases of COVID-19 on Thursday and believes it has controlled a cluster in Brisbane that's grown to 130 cases.

But that's only because the city locked down quickly for eight days, and upwards of 15,000 contacts of the school-based Indooroopilly cluster went into two weeks of strict home quarantine.

All of the new cases reported on Thursday were in isolation for the entirety of their infectious periods.

A similar number of cases are expected in coming days, as the cluster matures, but Chief Health Officer Jeannette Young says they won't pose any broad threat because contacts have been confined to their homes.

Premier Annastacia Palaszczuk has vowed to do everything in her power to stop the virus creeping across the border from northern NSW, where many communities are now in lockdown.

"Do not go into NSW," she has told Queenslanders. "Now is not the time to cross the border ... stay within Queensland."

Ms Palaszczuk and Deputy Premier Steven Miles will meet virtually with the mayors of Queensland border towns on Thursday to re-emphasise the risk the NSW crisis poses to their communities, and the entire state.

"The last thing I want to see is the virus coming across the border, to our southwest communities or into the Gold Coast and creeping north," the premier said.

Dr Young said a lot of work had already been done to get Queensland's border communities vaccinated but there would be a concerned push in coming days to make sure everyone who wants a jab gets one.

Many of the thousands of people who've been in home quarantine due to the Indooroopilly cluster will complete their 14 days of isolation by the end of the day.

Dr Young has thanked them, saying "you have absolutely kept Queensland safe" but she also warned there protocols must be met before people can leave home.

"We're still seeing cases pop up towards the end of that incubation period."

Anyone who isn't clear to process to end home quarantine should call Queensland Health.

Dr Young warned more outbreaks in Queensland were inevitable pleaded with people to get vaccinated, wear masks, and religiously use check-in codes.

"This was our 15th incursion of the virus in the last six weeks. It was the 15th outbreak that got away and we ended up with 130 cases.

"We are going to have more outbreaks so please anyone anywhere in Queensland with any symptoms at all come forward and get tested immediately."

Queensland will open it's border to travellers from South Australia from midday after that state got on top if its recent infections, but people must arrive by air due to the situation in NSW.

Meanwhile, health authorities have apologised after an error in vaccine preparation meant six people may have received an "ultra low" dose of Pfizer at a hub north of Brisbane.

The mistake happened at the Kippa Ring Vaccination Centre on Saturday morning, and 66 people are being contacted as there is no way to know which of them received an insufficient dose.

It follows a similar incident in Rockhampton two weeks ago where 159 people were offered another vaccine after six people were given an ultra low dose of Pfizer.

Dr Young said all those affected would start the vaccination process all over again, meaning they'll have had three shots in total by the time they are fully protected but there is no health risk associated with that.

Queensland recorded one other cases on Thursday that was overseas acquired and detected in hotel quarantine.