Rescuers have saved 70 pilot whales stranded in Tasmania but are now faced with the grim task of collecting almost 400 carcasses. 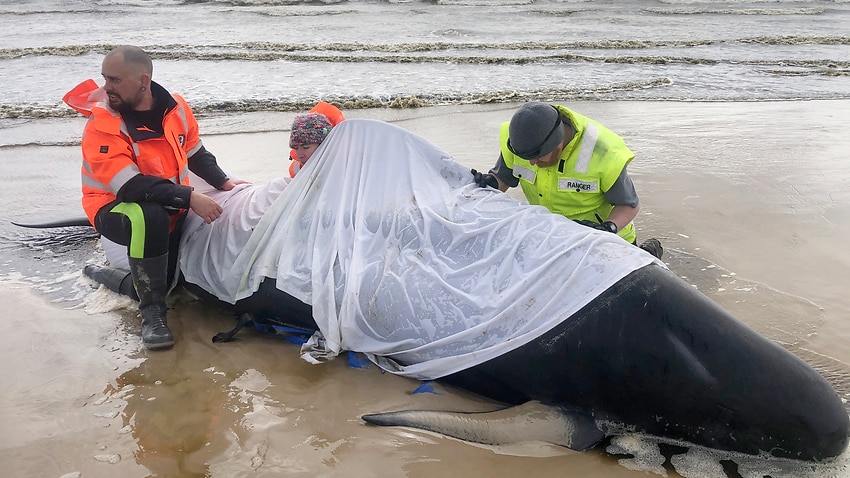 A huge rescue mission to save some 270 pilot whales stranded off Tasmania's remote west coast is underway. Source: TASMANIA POLICE

But about 380 of some 470 whales are confirmed to have died after the pod got into trouble at Macquarie Harbour on Monday.

"We're retrieved 70 whales or thereabouts off the sandbar and released them out to sea," state Parks and Wildlife manager Nic Deka said on Thursday morning.

There are roughly 20 whales still stranded and fighting for life on the sandbars but their chances of survival are becoming increasingly slim.

Wildlife biologist Kris Carlyon said four would have to be euthanised for welfare reasons.

"These are animals that we've given a chance. We've tried to release them, they haven't done well," he said.

Crews are now faced with the grim task of collecting carcasses, which are likely to be disposed of at sea if conditions allow.

"As the whales start to decompose, they will bloat and float and with wind and tide, they'll drift," Mr Deka said.

"They could cause a significant navigation hazard if we don't contain them."

Wildlife Biologist Sam Thalmann said rescuers had experienced challenging conditions at Macquarie Harbour but had been "very lucky" in being able to free around 70 mammals.

"It's hard work, it's dynamic, it's challenging, but the rewards as we have seen over the last few days with over 70 animals released are great and they're very much worth the effort," he told reporters on Thursday morning.

"We've been very lucky over the last few days, we've had favourable tides ... but it is still very rough, and the animals do have to traverse quite a bit of broken water."

Members of a rescue crew stand with a whale on a sand bar near Strahan, Tasmania. Source: POOL The Advocate

Cold and wet weather is expected on Thursday, ideal for the healthy whales but physically demanding on rescuers.

"It is challenging for volunteers and staff out there. It is emotional, there are animals swimming around, they're vocalising, and we can see the bonds and the pairings within them," Mr Thalmann said.

"We try to focus on the rewards when we do get those animals out."

Wondering how the rescued pilot whales are making it through Strahan’s treacherous Macquarie Heads and back to open seas? Here’s one hitching a ride on Petuna Aquaculture’s boat, Digger @themercurycomau pic.twitter.com/k44IL9tN6Q

Local salmon farmer Tom Moutney is one of the volunteers who joined the rescue effort, bringing along three boats.

"It's a pretty tight-knit community, we heard about it straightaway and offered to help, and do what we can," he told SBS News on Wednesday.

"We got here at about 7 o clock this morning with a couple of boats from Petuna, and we've just been moving whales as quick as we can."

While conditions have been tough, he said the morale among rescue crews has been strong.

"It's pretty positive, we're just doing what we can, every one we get is a win," he said.

Dr Carlyon said the stranding was definitely the biggest in Tasmania and likely the largest on record in Australia.

It surpasses Tasmania's largest mass stranding of 294 long-finned pilot whales in 1935 at Stanley.

It is also greater than a 1996 event where 320 pilot whales became beached at Dunsborough in Western Australia.

One large group was initially discovered stranded near the harbour's head on Monday, with rescuers on Wednesday morning spotting 200 dead whales a few kilometres away.

It is thought the two groups were part of the same pod.

"Pilot whales are incredibly social and maintain strong social bonds with each other and have been known to be found in groups up to 1,000," marine scientist Dr Vanessa Pirotta said.

"The ability for them to stick together and follow the leader is something we see often with these animals, which is why it is so heartbreaking."

The freed whales were likely to reform their social group, Dr Carlyon said.