There are more than fifty thousand meteorites known to science, but only a handful can be tracked to their origin. One such example has been uncovered in Lake Eyre potentially hours before it was lost forever.

A meteorite unveiled in Perth could offer science more clues on how the universe was formed because scientists believe they know where it came from.

The chondrite or stony meteorite was discovered thanks to a network of 32 remote cameras spread throughout Western and South Australia.

Not only could Curtin University’s Desert Fireball Network track its location to South Australia’s Lake Eyre, but the team believes it could possibly find the asteroid it came from.

“It’s like having a bucket of rocks in your backyard,” said Robert Howie one of the team members who found the meteorite. 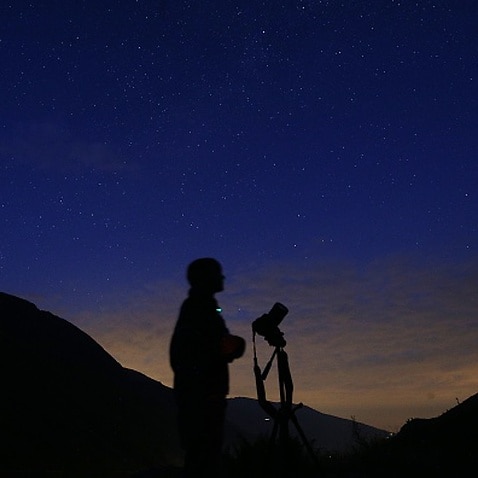 Look up! Your guide to some of the best meteor showers for 2016

“If you don’t know where they came from, you can’t really do much.

“But if you know exactly what part of Australia they came from, you can start to reconstruct the geological picture.”

The hope is the meteorite, which passed Mars and just reached the limits of Earth’s orbit, could reveal more about the universe.

“We’re looking to try to get the geochemistry of the early solar system,” said Ellie Sansom, a team member who helped track the meteorite’s path.

“How the elements were distributed among that pre-solar disc is really interesting.”

But, the meteorite might not have been discovered if the team hadn’t acted when it did. It was dug up just hours before a heavy downpour would have covered any trace of its landing site.

The meteorite was captured as a so-called fireball arcing across the night sky in late November by one of the network’s remote cameras, which also has a GPS and emails the team when an image arrives.

The first stage was to fly over the site to find the impact spot.

Getting to the location was another matter.

They needed permission from the Arabana people, the custodians of the area, and then spent two days slogging through mud with four-wheelers.

Finally with the help of a spotter plane, they found a shallow depression on New Year’s Eve – the site had nearly been filled in with mud.

Professor Phil Bland, who lead the team said finding the meteorite was a very complicated process, which required experts in many fields calculating and interpreting a lot of data.

“But you don’t know if all of that is working until you find the thing on the ground,” he said. “So we’ve been collecting that data for about a year and we’ve probably got about a dozen or more other meteorites on the ground that now we know we can accurately pinpoint.

“So it’s a great discovery in its own right because meteorites are the oldest rocks in the universe and tell us about how our solar system came together … but for our project it’s wonderful because it means the whole thing works.”