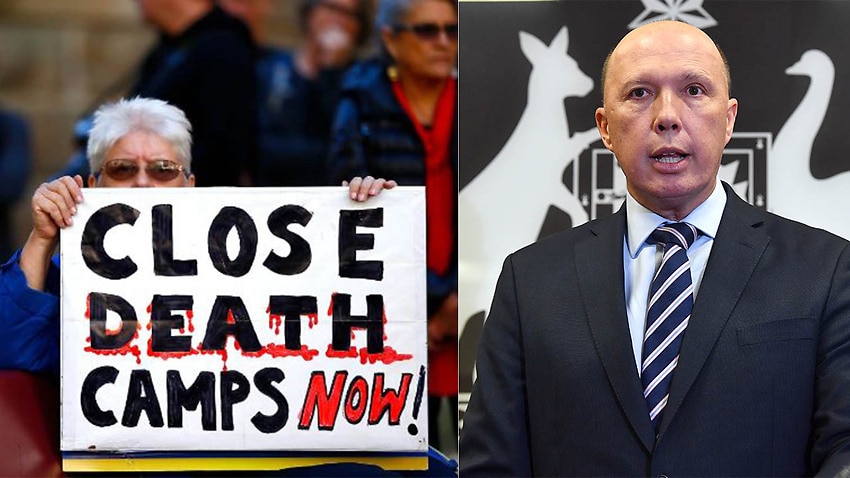 Refugees are being encouraged to self-harm so they can come to Australia for medical treatment, according to Home Affairs Minister Peter Dutton.

Mr Dutton has accused refugee advocates of advising refugees on Manus Island and Nauru to hurt themselves in an attempt to take advantage of medical evacuation laws.

"They've done that because of this [medical evacuation] bill that Labor introduced."

The medevac bill was actually introduced by a group of crossbench MPs, though it was supported by Labor.

Mr Dutton’s comments come days after Home Affairs failed to provide evidence to support the department's concerns refugees see self-harm as the quickest way of being medically transferred to Australia.

It also comes two months after he said women on Nauru were using rape and abortion claims to secure transfers.

The medevac laws, which passed against the Morrison government's wishes earlier this year, gave doctors a greater say in transferring sick refugees being held offshore to Australia for medical treatment.

The coalition is now trying to repeal the legislation.

Only four of the 111 asylum seekers transferred to Australia under the laws have been admitted to hospital for treatment.

"And as of today, there are none in hospital at all," Mr Dutton said.

"People realise that this is a scandal."

The laws allow for the minister to reject medical transfers on national security grounds.

But Mr Dutton said he is dealing with an application from one man who poses a serious security concern.

"There's nothing on the legal advice that I've got that I can do in relation to that matter, and we are compelled to take these people," he said.

One Nation leader Pauline Hanson has accused the government of not doing enough to prevent people from taking advantage of the medevac laws.

"The government lied to us ... they haven't been tough on it," she told Macquarie Radio in a separate interview.

"It's an absolute farce, and the government, as far as I'm concerned, they're weak about it."

Readers seeking support and information about suicide can contact Lifeline 24 hours a day online and on 13 11 14. Other services include the Suicide Call Back Service on 1300 659 467, Beyond Blue and Kids Helpline (for people aged five to 25) on 1800 55 1800. More information about mental health is available at Beyond Blue.