Refugees in Germany given second chance at university education

In the German town of Heidelberg, a group of refugees is on track to enrol in one of the country’s most prestigious universities, thanks to an intensive language program. 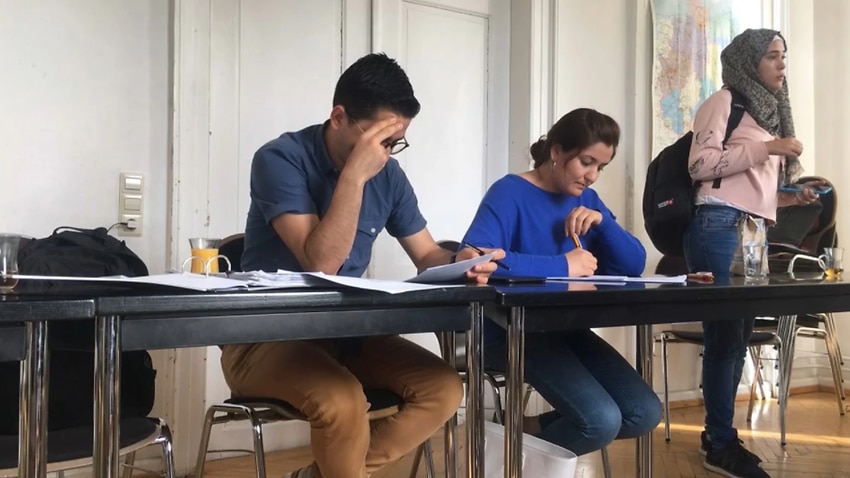 Heidelberg, in Germany's southeast, is a picturesque town on the River Neckar known for its 16 century castle, cobbled streets and medieval churches.

It is also home to the country’s oldest university, one of the world’s top institutions for science.

Enrolment is highly competitive but refugees including Farhad (not his real name), who fled Iran, are determined to defy the odds.

Farhad, whose father is Kurdish, had been studying medicine in his homeland, but when the government found out he’d been helping educate Kurds and other persecuted minorities, they suspended his degree and wiped his academic record.

"Between my studying I tried to do something to help them," he said.

"They stopped me from studying. Right now I have no chance to study medicine. They deleted my profile, my whole university [record] which I passed - books and subjects - and I cannot show that. "

In 2015, when more than a million migrants entered Germany, Heidelberg University hastily set up a program for refugees like Farhad, seeking a second chance.

"I was surprised how quickly there was a kind of normality," she added.

Ms Gardt said learning German was made the priority.

"In 2015, lots and lots of young people came to Germany and the idea was to start teaching them German first. From summer 2016, we offered placements for 65 students - 40 in language learning, 25 in specific courses where they are taught specific subjects in order to prepare for a course of study."

She said while the Merkel government funded the program, the university dictated how it would be run, believing that refugees would be better off learning German among other international students, rather than isolated classes.

"We were free to organise the courses the way we wanted, we could have organised courses for only refugees, but we opted against that because we believe they could learn faster and better if they are in international classes," she said.

"And that’s what students keep telling us. It was a relief to them there was a student next to him or her from Taiwan and they had the same problems with the German language."

Migrant employment on the rise

Job figures show over 300,000 refugees are now employed across Germany, an increase of 100,000 since 2017. Learning German has been cited as one of the factors that has led to the increase.

"We introduced, not only language programs to help them learn German as a second or a foreign language but we also had welcome packages to introduce them to the campus, to the university system, to the city of Heidelberg of course, so anything that you need to cope with this - not only to cope with the clash of cultures but also the experience they had and the reasons why they had to flee their countries."

"Many have found jobs already and are somehow integrated [but] that takes time. Germany has always been an immigration country."

Yet the issue of migration remains divisive in Germany, with tensions escalating in recent months particularly in the east, where mass anti-immigrant protests and counter-rallies have shaken the region.

"They say this, the media, they don’t want refugees but they don’t sit with us, they don’t speak with us," said Ghiath, who fled war-torn Syria in 2016, and is determined to study radiology at Heidelberg University.

"I focus only on what I have to do (to get) what I want. My goal is to achieve my dream and I hope I will achieve it."

The same goes for Farhad.

"I personally just want to continue my study, to reach my goal then I want to help society and people," he said.

Heidelberg is recognised globally as a centre of science and research and each year it hosts award-winning computer scientists and mathematicians for a week-long conference.

Among the laureates this year is Caucher Birkar, a Kurdish refugee who won this year’s Fields medal, known as the Nobel Prize of mathematics.

The report, Migration and the Economy: Economic Realities, Social Impacts and Political Choice, highlights and there's a disconnect between public perceptions of migration and the actual trends.

Mr Birkar agrees and says it is time for a shift in attitudes.

"Refugees also contribute in a very positive way to wherever they go, so we should not always focus on the negative side of a refugee. Maybe people should remember that Einstein was a refugee," he said.

Abbie O'Brien travelled with the assistance of the Heidelberg Laureate Forum.

Share
Published 4 November 2018 at 11:05am
By Abbie O'Brien
Topics
ImmigrationEurope