Victoria is in the midst of one of its driest periods on record and farmers are struggling to make ends meet as a result.

Parts of regional Victoria are experiencing their driest period since records began, and pressure is building on farmers across the state.

Climatologist Jonathan Pollock,from the Bureau of Meteorology, blames the drought on an El Nino weather event which has impacted heavily on the land.

“Areas that have had their lowest ever two-year period for rainfall,” Mr Pollock said.

This month, Melbourne's water storage has slipped below 60 per cent and is 10 per cent down on levels the same time last year.

The bureau predicts Victoria's north will get the first reprieve, with the rest of the state rated a 50 per cent chance of receiving average rainfall during winter and spring. 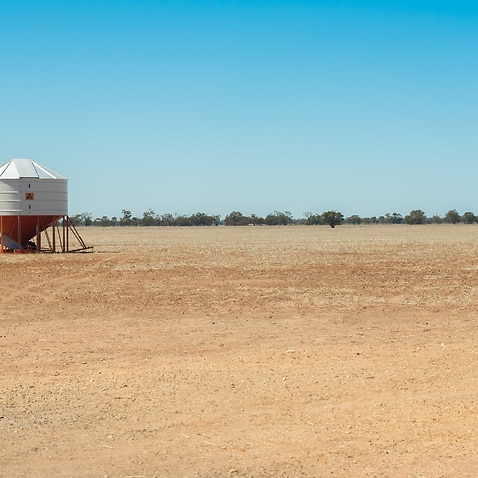 Explainer: what are El Nino and La Nina?

Ballarat's well-worn saleyards shift more than a million head of livestock each year, and for the time being at least demand remains strong.

Consecutive failed Spring-rains have seriously compromised pasture growth and on a windy day, top-soil can literally be seen disappearing into the distance.

Third-generation grazier Charlie Fairbairn-Calvert says he’s been forced to feed his sheep every day in order to sure-up prices. But it’s expensive.

“We're feeding over 10 tonnes of wheat a week plus ten tonnes of clover hay,  $3000 worth of wheat per week and the hay is about $3000 worth as well,” Mr Fairbairn-Calvert said.

His farm is near Skipton about 50km west of Ballarat where they've had 52-months of below average rainfall since 2011, and are currently in their 15th consecutive month below average.

Stock agent James Gordon clocks up about 80,000km a year visiting clients in the region and says the costly process of feeding has become necessary for most farmers in the region.

“A lot of dams in the district are dry and that's having an impact on the decisions that livestock producers are making moving forward,” Mr Gordon said.