The developments come just two days after a Sudanese faction calling for a transfer of power to civilian rule warned of a "creeping coup". 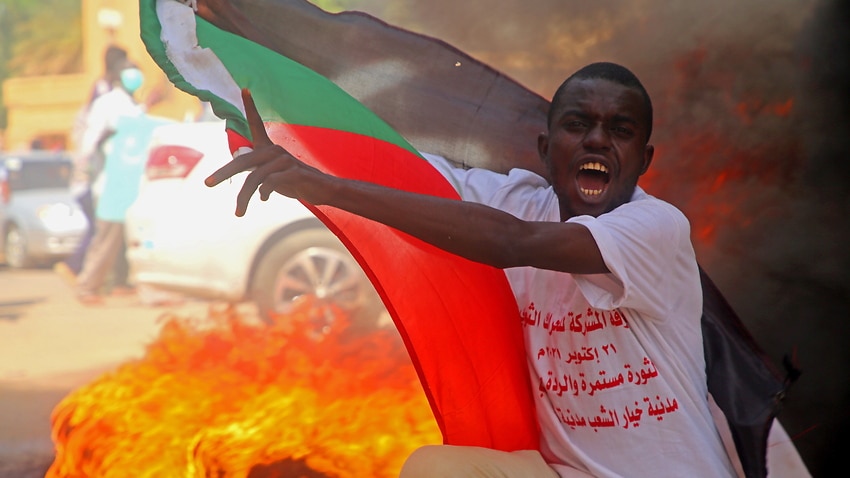 A protester holds a Sudanese flag during demonstrations in support of the civilian government in Khartoum, Sudan, 21 October 2021. Source: EPA

Sudan's Prime Minister Abdalla Hamdok and ministers in the transitional government have been detained by armed forces, the information ministry says, amid reports of a military coup.

"After he refused to be a part of the coup, a force from the army detained Prime Minister Abdalla Hamdok and took him to an unidentified location," the ministry said on Facebook on Monday, shortly after releasing another statement saying civilian members of the ruling council and other leaders had been arrested.

The detentions came as tensions peaked between the military and civilian figures who shared power since August 2019 following the ouster of autocratic president Omar al-Bashir months earlier.

Internet services were cut across the country and the main roads and bridges connecting with the capital Khartoum shuttered, the information ministry said.

The Sudanese Professionals Association, an umbrella group of trade unions which were key in leading the 2019 anti-Bashir protests, was quick to denounce what it called a "military coup" and urged demonstrators "to fiercely resist" it.

The United States said it was "deeply alarmed" by the coup reports.

"The US is deeply alarmed at reports of a military take-over of the transitional government," said US special envoy for the Horn of Africa, Jeffrey Feltman. "This would contravene the Constitutional Declaration (which outlines the transition) and the democratic aspirations of the Sudanese people."

The United Nations described the detentions as "unacceptable".

"I am calling on security forces to immediately release all those unlawfully detained or put under house arrest," said Volker Perthes, chief of the UN Integrated Transition Assistance Mission in Sudan.

The European Union and Arab League have also expressed "concern".

"The EU calls on all stakeholders and regional partners to put back on track the transition process," EU foreign affairs chief Josep Borrell tweeted.

Read More
Thousands of protesters rally in Sudan, calling for a military government

The developments come just two days after a Sudanese faction calling for a transfer of power to civilian rule warned of a "creeping coup" during a news conference that an unidentified mob attacked had sought to prevent.

Sudan has been undergoing a precarious transition marred by political divisions and power struggles since the April 2019 ouster of Mr al-Bashir.

Since August 2019, the country has been led by a civilian-military administration tasked with overseeing the transition to full civilian rule.

But the main civilian bloc - the Forces for Freedom and Change (FFC) - which led the anti-Bashir protests in 2019, has splintered into two opposing factions.

"The crisis at hand is engineered - and is in the shape of a creeping coup," mainstream FFC leader Yasser Arman told Saturday's press conference in Khartoum.

"We renew our confidence in the government, Prime Minister Abdalla Hamdok, and reforming transitional institutions - but without dictations or imposition," Mr Arman added.