Over 100 residents and business owners affected by a huge blaze at Coolaroo Recycling Centre in Melbourne have lodged a class action against the operators of the plant.

“That’s the first step in commencing legal proceedings against the operators of the recycling plant," he said.

“Within the confines of that court proceeding, we will be seeking damages on behalf of affected persons and businesses.”

Last week, around 100 homes and businesses in and around Coolaroo were evacuated as a result of of toxic fumes, smoke and ash emanating from the fire at the SKM Industries factory.

The fire continues to smoulder into its eighth day, with residents becoming increasingly worried about the toll on their health.

Frances Evans, who lives in nearby suburb Dallas, told SBS World News she was evacuated along with her husband and twin sons.

"The whole thing is quite horrifying. And that fact that it's still burning is horrifying. We want to know who's to account and who's going to compensate the community."

A community meeting was held in Coolaroo on Thursday evening with over 100 people in attendance.

Mr Pendergast said many residents at the meeting expressed serious concerns about their health.

“There are many, many people who have been required to undergo a medical examination during the week," he said.

“Many have been referred off for chest x-rays. This [has] impacted on children in particular, also the elderly and even able-bodied adults.

"The respiratory effects of what they’ve been through is a very serious issue.” Ms Evans suffers asthma and said she had chest problems when the fire first broke out and she was concerned about the health impact on her four-year-old son.

"My asthma disappeared after I Ieft Dallas, but my son got sick over the weekend with ulcers on his lips and then after we returned he got a respiratory infection and a virus," she said.

Mr Pendergast said the case is likely strengthened by the fact that it was the third fire at the recycling plant this year.

“A once-off fire in some instances is probably less foreseeable, less predictable, less able to be managed.

"But when you have instances of repeated fires in a circumstance where a fire is a predictable hazard, I believe that seriously and significantly strengthens the case.”

Many 'spoke no English'

Many of those evacuated were sent to the Broadmeadows Aquatic Centre, while others chose to seek refuge elsewhere, such as at motels or with friends and family.

Mr Pendergast said a number of those evacuated were either "not strong in English or don't speak any English".

“We’re going to have address that issue and disseminate the advice we’re giving those people through engaging in interpreters or publishing our material in their language."

Mr Pendergast said he was told by community members at the meeting that their needs were not catered for during the evacuations.

“There were many people who spoke no English, who were left out of the loop and were not presented with the urgent information in their language at the time. 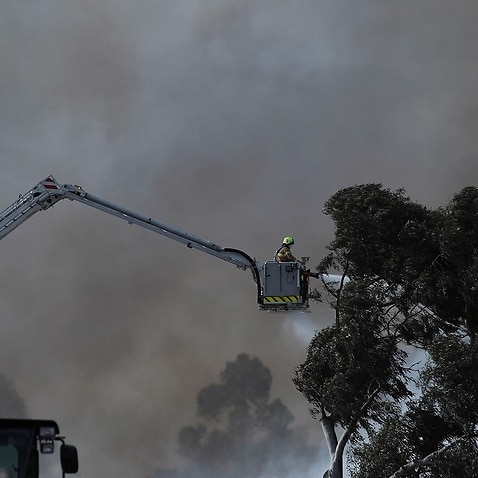 Victoria fire: Evacuation order lifted as it emerges company’s fire plan was due for review

“They were to some extent, left on the periphery to fend for themselves.”

In a statement provided to SBS World News, a SKM spokesperson has said the company understands "the impacts the fire had on our neighbours and the local community and we are extremely sorry for what they have gone through".

"We have never had an incident like this in our 18 years of operations.

"At this stage the cause of this fire has not been established and we look forward to the investigations shedding more light on exactly what has occurred and why."