Being deprived of the basics - including education and adequate nutrition - remains an everyday reality for many Rohingya children, but human trafficking and sexual assault are now posing an extra threat. 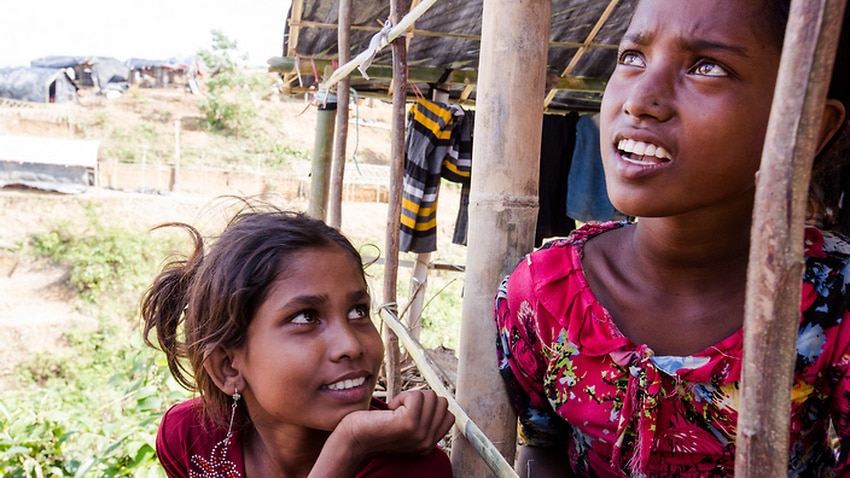 Cox's Bazar is a fishing town in Bangladesh where minority Rohingya from Myanmar have sought refuge after being forced to flee their homes.

Aid agencies estimate 60 per cent of the residents there are children, including many who have lost their parents.

Anwar Hossain is a Rohingya refugee who escaped conflict in Myanmar and is now living in a refugee camp in Bangladesh.

Along with his wife and children, a lost child no older than three is also staying with them.

No child deserves to have their #childhoodinterrupted. All children have a right to quality education in a safe and protected environment, even when they are displaced. We must do more for Rohingya children #Savethechildren. Read more: https://t.co/NtBdbL9mve pic.twitter.com/XpSrQ7UZ8R

"When we were crossing the border I found this child stranded in a field. So I brought him back with me," he said.

"Since we could not find his parents he is staying with us as our family member. Though my wife is there for him he still cries for his own mother."

A new report titled Childhood Interrupted, launched by Save the Children, Plan International and World Vision, looks at the situation facing Rohingya children in the camps.

The report estimates that 688,000 refugees have fled from Myanmar's Rakhine State since August last year, following an increase in violence in the region.

Most have ended up living in tents in Cox's Bazar in Bangladesh.

REPORT: 6 months into the #Rohingya crisis, our #ChildhoodInterrupted report reveals extent of fear and distress experienced by children who fled to #Bangladesh. We must do more for Rohingya children > https://t.co/NtBdbL9mve @PlanInAsia, @WVAsia pic.twitter.com/gYma1jd7Z6

Acting CEO of Plan International Susanne Legena explains how the charity has been helping to register unaccompanied, separated and orphaned children.

"We know that wherever there is a crisis, that involves large numbers of children, those children become vulnerable to being trafficked," Ms Legena said.

"So one of the things that aid agencies like us and governments try to do straight away is try to re-create a protective mechanism that allows kids to be tracked and traced and connected to their family or people who will mind them so they will be in a safe environment and kind of protected from predators."

UNICEF estimates that in 2016 around 28 million children around the world were living in forced displacement.

In addition to this the UN agency says around seven million children were internally displaced due to natural disasters.

In the case of Rohingya children there are no reliable statistics available about how many children have been separated or whose parents have died.

Sajida’s 18-month-old son Mohammad used to play happily in #Myanmar and she could afford to feed him properly. Things changed when they fled the violence & reached #Bangladesh. Watch full video: https://t.co/RF87go1T79 pic.twitter.com/1NF6thjIZZ

After conducting interviews with 200 children in the camps, the report proposes a number of measures to address issues identified by the children interviewed.

These include raising awareness around trafficking risks as well as ensuring information is accurate in a bid to minimise unnecessary fear.

The report also recommends existing community safety patrols in the camps be reviewed, to ensure teenage girls be given more opportunities to participate in activities.

Ms Legena says in the environment of a refugee camp unaccompanied children can sometimes be tricked by strangers who feign interest in their welfare, but who are really seeking to exploit the children.

"We are always working on the ground with the community to try and prepare them that this is the kind of thing that sometimes unfortunately sometimes happens in a crisis that people sometimes prey on that situation for the worst possible reasons and our job is to keep those kids as safe as we can."

Sabrina Karim is an Assistant Professor in the department of Government at Cornell University in the United States.

She has recently returned from the Rohingya refugee camps in Bangladesh to look at how the camps are being managed.

Ms Karim says while she describes the situation in the camps as desperate and horrific, the only the positive is that the government of Bangladesh was doing a good job in co-ordinating aid agencies working in the camps.

She puts this down to Bangladesh's decades long involvement in peace keeping missions as well as its management of its own regular natural disasters.

"The way that the Bangladesh government has done this is is that they have set up a separate civilian body to oversee all of the different aid organisations that are coming into the country. Any aid organisations need to apply and get approval."

While the situation facing Rohingya children remains acute, it can be difficult for charities to maintain long-term public interest in the suffering that continues for people in refugee camps.

Some health experts describe this as compassion fatigue, that is where people stop engaging with distressing events occurring overseas because of an overwhelming sense of powerlessness to change anything.

Add to this public concern over allegations of misconduct by some foreign aid workers, such as in the recent scandal involving sexual misconduct allegations by Oxfam employees in Haiti, and charities often face an uphill battle to raise funds for their work.

Ms Karim says there is also conflicting research about how to make aid efforts more effective.

"There's actually a lot of mixed results about whether or no aid induces more conflict or prevents conflict. There's not conclusions on that," Ms Karim said.

"So what is very important is to understand the dynamics of what is going on before flushing a lot of aid in. There really needs to be a plan for how that aid is going to be used and that's going to vary based on each conflict and each situation."

What is known though is for Rohingya children stranded in refugee camps and for the people who are attempting to help them, the future remains uncertain.

"We really need to consider that this is a possibility that these children are going to be displaced for a significant amount of time. We need to ensure that we are scaling up the humanitarian need," Ms Legena said.

"The monsoons will hit soon and that will make a bad situation worse and we need to ensure children, and in particular a vulnerable group of girls amongst those children, young women, that they are protected and that we use whatever powers we have to ensure that we do no harm and we think about getting those kids into some type of normalcy as soon as possible."