Hollywood star Russell Crowe has asked Australians to consider taking in refugees and asylum seekers who are facing a life in limbo under the country's controversial refugee policies.

Authorities are remaining steadfast in their resolve to refuse refugees and asylum seekers entry into Australia.

Crowe, who migrated with his family to Australia when he was four, took to Twitter to announce he had the means to help some refugees resettle in the country and called on Australians to consider their own capability.

"I've thought about this," he said.

"I believe I could house and find jobs for six. I'm sure there'd be other Australians who would do the same."

It came after another tweet that blasted Australia's treatment of refugees and asylum seekers.

There has been strong opposition in New Zealand to Australia's offshore detention policy.

On Tuesday a GIF was posted to Twitter showing the word 'SHAME' sprawled across the pavement in front of the Australian embassy in the capital of Wellington.

Newly appointed New Zealand Prime Minister Jacinda Ardern will reportedly raise the closure of the Manus Island detention centre with her Australian counterpart, Malcolm Turnbull, when they meet for the first time on Sunday.

Ms Ardern said on Thursday she had sympathy for the asylum seekers and refugees on Manus Island, and with Australia's stance on immigration, the New Zealand Herald reported.

Immigration Minister Peter Dutton said in a statement on Tuesday that following the closure of the detention centre, refugees could settle in PNG as had been agreed in 2013.

Meanwhile those of the 600 men there who were not refugees should relocate to another facility named Hillside Haus.

The men have been stockpiling water and refusing to leave the compound after Australian authorities closed it.

The facility was anticipated to close since PNG's ruling in April last year that it was illegal. 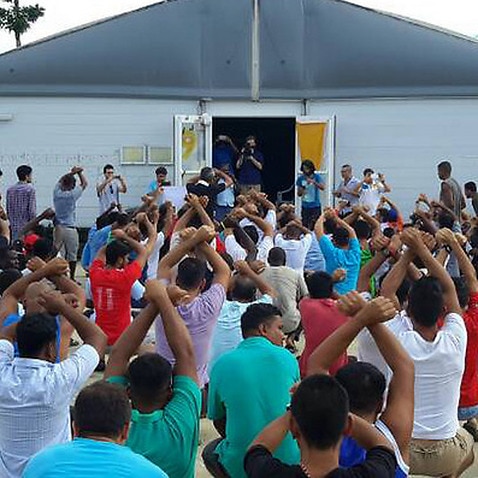 Labor's immigration spokesman Shayne Neumann has criticised the government for closing the centre, saying it had not done enough to ensure the future of the refugees and asylum seekers.

"Transferring refugees from one centre to another is not a long-term solution. These people urgently need viable third-country resettlement options," he said earlier this week.

Human Rights Watch said in a statement that Australia and PNG "had failed to protect" their wellbeing.

Elaine Pearson, the Australia director of Human Rights Watch, said this week: "The so-called 'Australian model' of dealing with refugees and asylum seekers ‎is no model to follow in Europe or anywhere else – the system has led to misery, suffering, and even suicide."