Scott Morrison's visit to the University of Queensland turned sour this morning after his car and a university building were hit with fake blood. 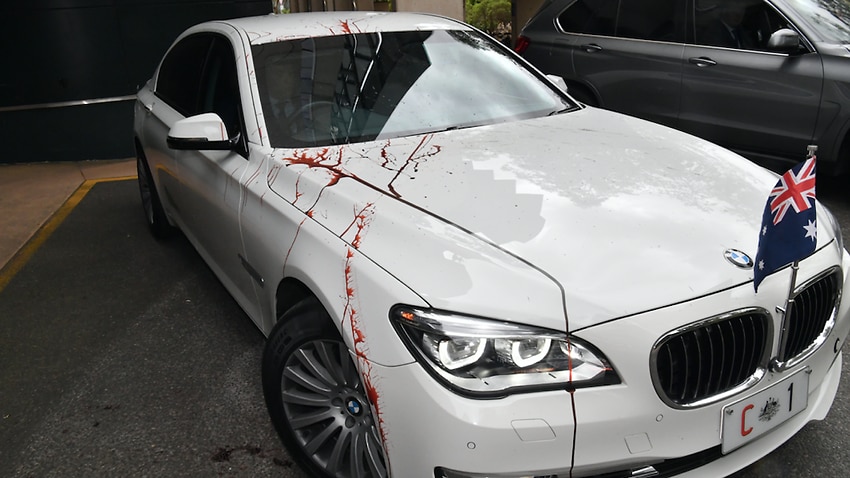 The Prime Minister's car is seen smeared in fake blood at the University of Queensland Source: AAP

Prime Minister Scott Morrison has been escorted from a University of Queensland building by police after his car was splashed with red paint by refugee rights activists during a protest.

Images uploaded to social media from the scene also show part of the university's Australian Institute of Bioengineering and Nanotechnology covered in the paint, as well as a security guard.

A banner covered in the fake blood reading "I'm sorry I came here by boat, I'm sorry for seeking safety" was also draped across the building.

Videos show dozens of protesters chanting "free the refugees" outside the building, where Mr Morrison was visiting a vaccine lab, and asking to speak with him.

A Queensland Police Service spokesperson said the protest action began outside the university, during which Mr Morrison's car was damaged, and he was later escorted by officers from the building and into a police vehicle.

A security guard is seen guarding a door that has been smeared in fake blood Source: AAP

Asked about the protesters at a media event later in the day, Mr Morrison said their actions were "very disappointing".

Refugee rights activists in Brisbane have this year repeatedly protested outside the Kangaroo Point Central Hotel, where some 120 asylum seekers are being detained.

They have long criticised Mr Morrison and the coalition government for its hardline immigration and border polices.

A refugee protester is seen outside a glass door Source: AAP

In 2018 Mr Morrison attracted international attention when it was revealed he had a trophy in the shape of a migrant boat with the caption "I Stopped These" in his office, in reference to his overseeing of the government’s Operation Sovereign Borders policy during his time as immigration minister.

A few months later, he told an event organised by suicide prevention service Lifeline that he has cried “on his knees” over the plight of young asylum seekers held in Australian offshore processing centres, saying border security was a “moral burden” and the issues were not “easy”.

Thirteen people have died while in Australia's offshore processing system since it resumed under the Gillard Labor government in 2012, according to the Refugee Council of Australia.