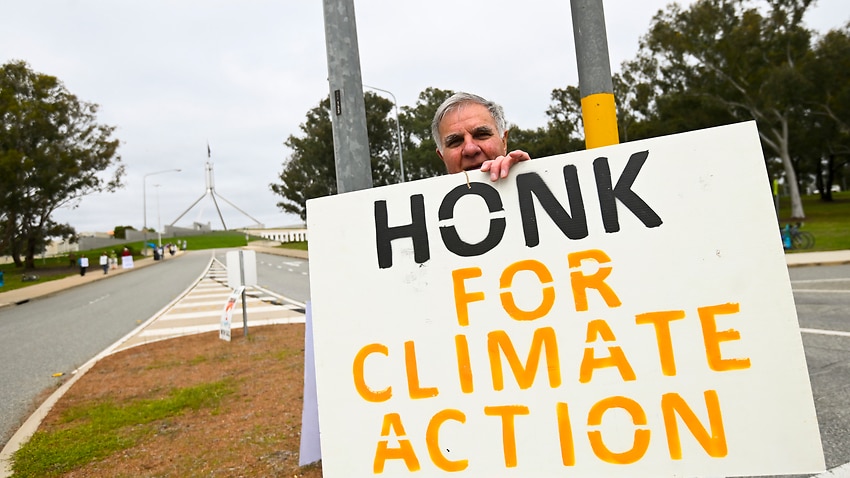 People hold banners as they participate in a climate protest outside Parliament in Canberra. Source: AAP

Mr Biden said the United States will reclaim its global leadership position on climate action by re-joining the Paris climate agreement and committing to a goal of net zero emissions by 2050.

Australia has continued to resist adopting the 2050 emissions target, which has in contrast been adopted by the United Kingdom, New Zealand, Japan, South Korea and the European Union.

Read More
Joe Biden says the US will rejoin the Paris Agreement in 77 days. Then Australia will really feel the heat

“Australia will always set its policies based on Australia's national interests and the contributions that we're making in these areas,” he told reporters.

Will Australia join @JoeBiden and embrace net zero emissions by 2050? "Australia will always set its policies based on Australia's national interests" @ScottMorrisonMP "The United States will make their decisions... and we'll do the same" #auspol @SBSNews pic.twitter.com/RS4CAqHpbq

‘The reality is Scott Morrison is isolated on climate change’

As MPs and Senators returned to Canberra on Monday, political opponents seized on Australia's policy divide.

The net zero by 2050 goal is supported by Labor, all states and territories and more than 70 countries.

“The reality is Scott Morrison is isolated on climate change,” she told reporters.

“He is frozen in time while the planet is warming and whilst friends, allies and economic opportunities pass us by.”

Mr Biden has also vowed to eliminate carbon emissions from the electricity sector by 2035 and spend $2 trillion over four years on a clean energy and infrastructure plan.

Read More
Facing a divided US, Joe Biden and his aides plan for the 'hard work of governing'

‘You have got to have a plan to get there’

Mr Morrison has welcomed the United States return to the Paris Agreement.

But when asked about the net zero emissions target, he said there was no "one size fits all" when it came to climate policies.

"Our goal is to achieve that as soon as you can, but we will do it on a basis of a technology roadmap," he said.

"So we have the technology to achieve lower emissions in the future. You have got to have the plan to get there. I have to be able to explain how we get there and what it would cost.”

The prime minister has previously called the net zero by 2050 target "achievable", saying Australia expects to reach this goal in the second half of the century through its commitment to the Paris Agreement.

‘This idea we’re meeting and beating our commitment is rubbish’

Independent MP Zali Steggall on Monday introduced a bill to Parliament that would back the net zero emissions by 2050 target and set up an independent body to advise the government on climate change policy.

Ms Steggall said the idea that Australia is meeting and beating its climate change commitments is “rubbish”.

“We need to commit to net zero by 2050 and implement a real plan to get there,” she said.

"The prime minister needs to step up and bring Australia to the table. At the moment we have the handbrake firmly on and the people who will pay for that will be the Australians.”

Under the Paris Agreement, Australia has committed to reducing its emissions by between 26 and 28 per cent below 2005 levels by 2030.

Australia has faced criticism for being the only country planning to meet the pledge by using so-called “carryover credits” from its previous Kyoto emissions targets.

Global push led by US and UK

British Prime Minister Boris Johnson has promised to work with President-elect Joe Biden on a joint platform urging countries around the world to take stronger action on climate change.

University of Sydney Professor Tim Stephens said that meant Australia would find it harder to justify its response around the world.

"The Australian government has used inaction by the US, China and other nations as justification for setting weak carbon emissions targets at home," he said.

"That argument no longer holds."

Greens Leader Adam Bandt said that - with President Trump's looming departure - there is now a “real chance” for the world to take stronger climate action.

“We will tip over the climate cliff under Scott Morrison's targets,” Mr Bandt said.

“It has been Australia that has hid behind the United States. With the election of Joe Biden, Australia's only company at these global conferences now is going to be Russia, Saudi Arabia and Brazil.”

Mr Bandt said acting on climate change should be a focus of Australia's recovery plan from the coronavirus crisis.

This comes after former Prime Minister Malcolm Turnbull on Sunday described the government’s commitment to gas-led recovery initiatives as “BS” and “political piffle”.

The European Union is also understood to be contemplating systems such as a carbon border adjustment mechanism to encourage countries to beef-up emissions reduction actions.

This would mean countries could face penalties, such as high-emissions exports being hit with an import levy.

"It really is in Australia’s overarching interest to commit to net zero emissions by 2050."

Read More
'It's embarrassing': Fiery clashes in estimates over Australia’s resistance to net zero target by 2050

Labor has itself been criticised by Mr Morrison for not committing to a short-term 2030 target ahead of reaching the 2050 net zero emissions goal.

The policy has also caused internal divisions within the Labor party over how ambitious its climate change policy should be.

Labor leader Anthony Albanese said the opposition would adopt a position in line with reaching the target of net zero emissions by 2050 ahead of the next election.

“Australia is now isolated amongst our major trading partners when it comes to those issues.”