Streets across Europe came alive with Labour Day workers' rights demonstrations that were mostly peaceful though there were reports of violence and scuffles between police and protesters in Berlin and Paris.

Thousands have rallied in France, Spain and Germany to mark May Day in the midst of the COVID-19 pandemic, with Berlin police arresting some 240 people after "unacceptable" violence that saw protesters pelt officers with stones and bottles.

More than 30,000 people from across the political spectrum took part in several marches in the German capital on Saturday as part of the traditional Labour Day workers' rights demonstrations.

Most of the demonstrations passed off peacefully, police said.

But the mood darkened in the evening after police pulled far-left "black block" protesters out of the crowd for not adhering to pandemic hygiene regulations such as social distancing. 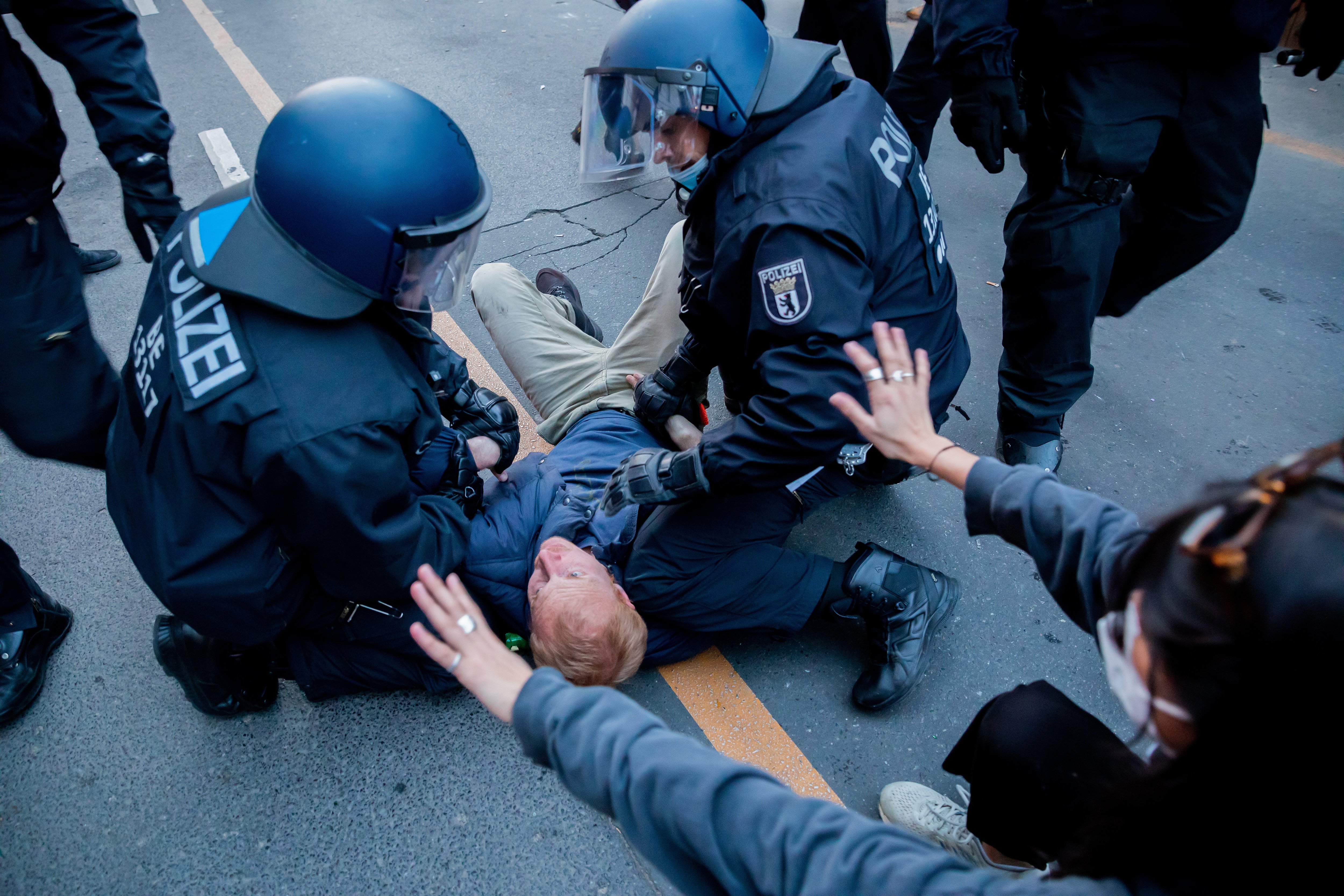 Berlin police officers hold a man on the ground during a May Day demonstration.
dpa

Along with thousands of others, they had been marching in the "Revolutionary May Day" demonstration to protest racism, capitalism and rising rents in the city.

Heavy scuffles ensued, with protesters throwing glass bottles and stones at police and setting dustbins and wooden pallets ablaze in the streets.

Around 20 officers were injured by the time the protest was broken up, Berlin police said.

"The situation did degenerate but was quickly brought under control," she added.

The German capital had deployed around 5,600 officers on Saturday to monitor the May Day protests, which have turned violent in the past. 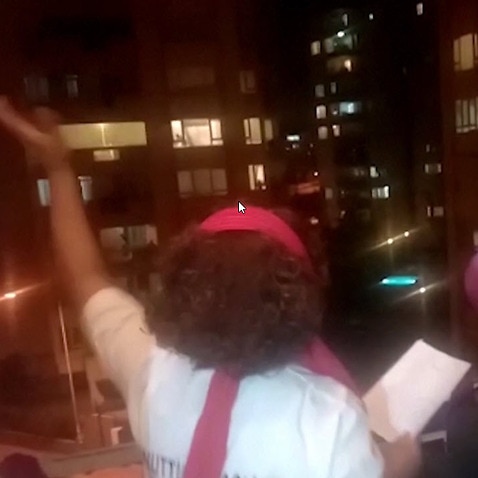 Police scuffle with protesters in Paris

In Paris, police fired tear gas at protesters who smashed windows of bank branches, set fire to dustbins and threw projectiles at police.

A police source told AFP that far-left "black bloc" protesters had repeatedly tried to block the trade union-led march in the French capital, where 46 people were detained.

Some protesters smashed the windows of bank branches, set fire to dustbins and threw projectiles at police, who responded with volleys of tear gas and stingball grenades.

About 5,000 police were deployed in Paris, a police source said. 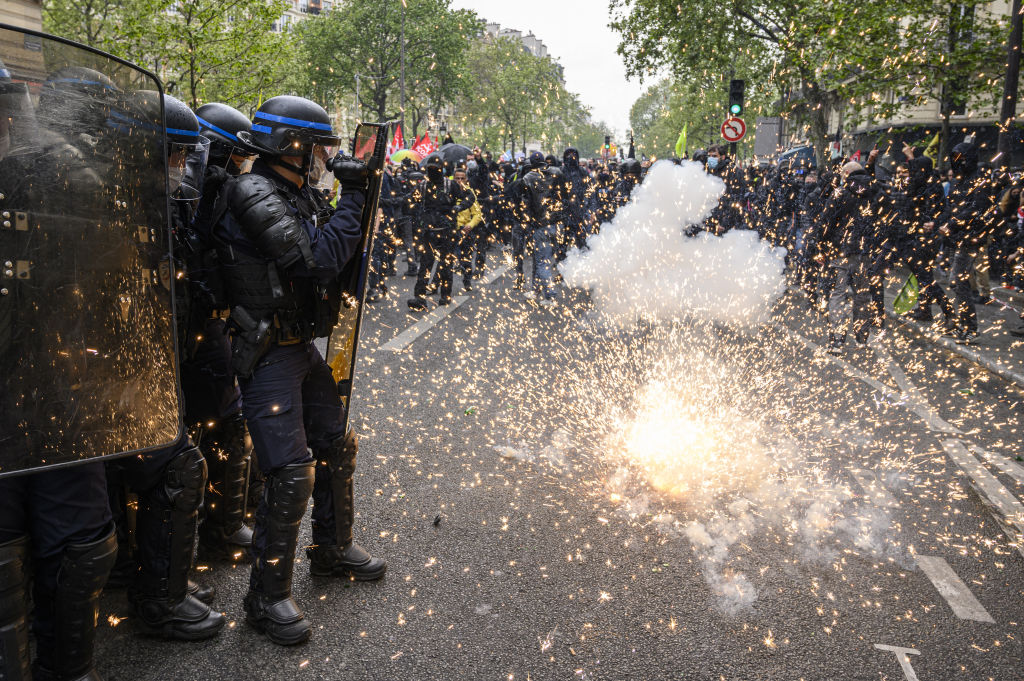 Protesters gather as they clash with police at May Day demonstration in Paris.
Anadolu

The CGT union said nearly 300 May day protests were planned around the country. It later claimed a total national turnout of 170,000, with 25,000 rallying in the French capital.

The crowds held placards with different demands, ranging from the end of the nighttime curfew in place as part of coronavirus restrictions, to a halt to unemployment reforms due to come into force in July.

"We have many reasons to come and rally - the health and social situations and the general impoverishment of society," said Ivan Gineste, 50, who works in a high school in the southeastern city of Lyon. 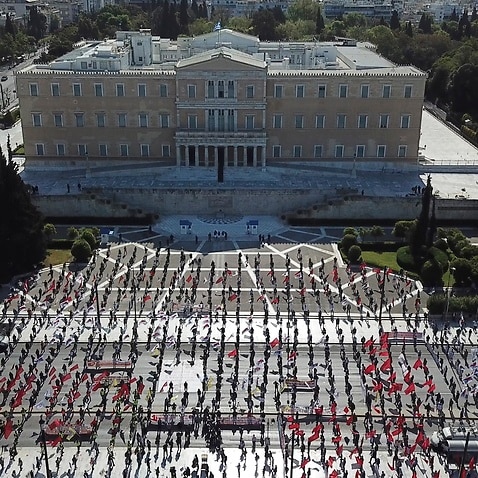 Members of the yellow vest anti-elite movement, which rocked Emmanuel Macron's presidency two years ago before largely fizzling out, could also be spotted at protests up and down the country.

"There are so many motivations for a revolt that are building up - the management of Covid, the so-called reforms that are going to take away people's ability to live, job-seekers who are going to lose their benefits," said a pensioner who gave her name as Patricia.

"We absolutely need to express ourselves," the 66-year-old said.

Thousands also rallied in more than 70 cities across Spain in the first Labour Day demonstrations since the pandemic began.

Wearing masks and observing social distancing, demonstrators marched through the streets waving banners although in many places, numbers were capped to ensure anti-Covid measures were respected.

The main demonstration in Madrid, which was limited to 1,000 people, began at midday under the slogan "Now it's time to deliver" with the participants marching from the town hall to the city's Puerta del Sol square. 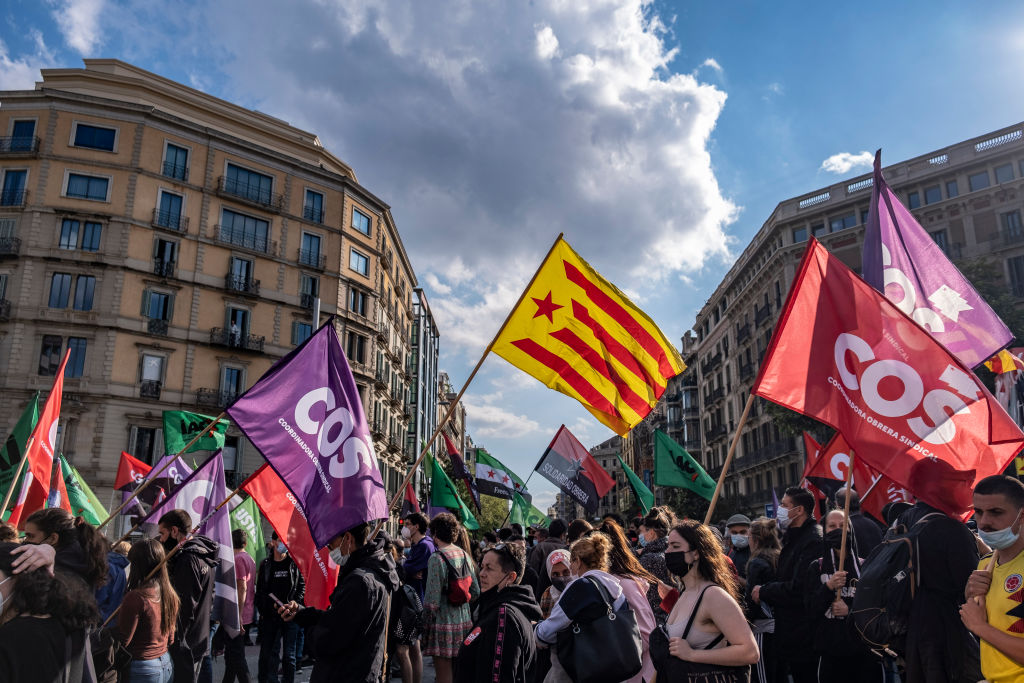 At the rally, union leaders Pepe Alvarez of the UGT and the CCOO's Unai Sordo urged the government to honour commitments delayed by the pandemic, such as repealing a controversial labour reform, raising the minimum wage and approving a law on equal pay.

Addressing the march, Ms Diaz said employment was key for overcoming the crisis.

"The crisis has made us face up to an outdated labour model, based on casual work, seasonal employment and inequality... which is exactly what the labour ministry has started to change," she said.