The parliamentary committee has warned people are being driven into poverty, food insecurity, homelessness and mental anguish because of insufficient payments from the income support system. 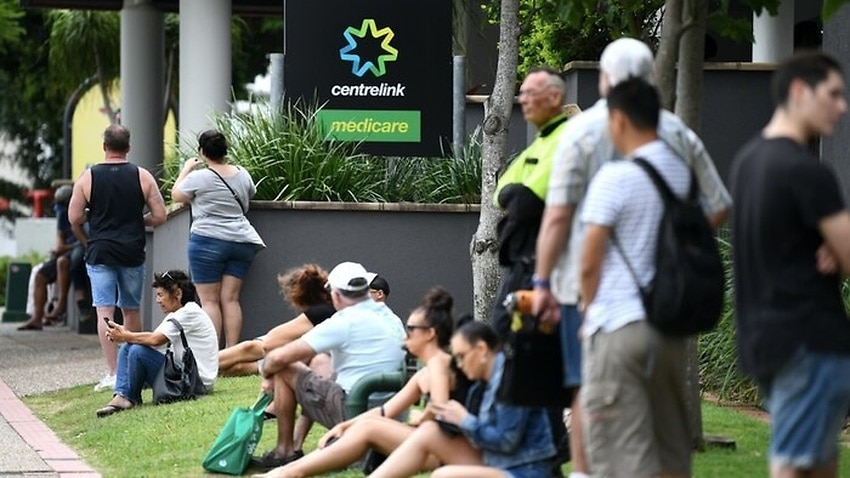 People in queues outside the Centrelink office in Southport on the Gold Coast. Source: AAP

A Senate committee into the adequacy of Newstart and similar welfare payments has urged the federal government to increase the benefits beyond the coronavirus crisis.

More than one million Australians are expected to apply for unemployment benefits because of restrictions tied to the outbreak, an inquiry into the pandemic heard on Thursday.

The federal government has doubled the JobSeeker payment - formerly known as Newstart - and expanded eligibility to income support for six months during the coronavirus pandemic.

But the Senate report has warned that before these changes, people were being driven into poverty, food insecurity, homelessness and mental anguish because of insufficient payments from the income support system.

Greens Senator Rachel Siewert, who chaired the Green-Labor-dominated inquiry, said the findings clearly indicated previous payment rates - set at $40 a day - had failed to provide an acceptable standard of living for welfare recipients.

"This inquiry process has been a scathing assessment of our income support system and how we support people in our community,” she said.

"It must not be government policy for people to live below the poverty line.”

The Government needs to listen to the people who bravely gave evidence of their lived experience at this inquiry. It is their voices that need to be heard.

However, the committee stopped short of recommending the amount the JobSeeker payment should be increased by.

The committee included nine Labor senators and two coalition senators, who handed down a dissenting report.

In its dissenting report, coalition senators rejected the recommendations made by the committee, which held national hearings from July 2019 to February 2020.

“It is a safety net for people while they look for work, set to a minimum standard to support living rather than a payment set to a replacement level or otherwise tied to wages or income,” the senators wrote.

The coalition's report said income support for the unemployed does not function as a wage replacement or as part of contributory or time-limited schemes and related payments.

But the committee's report has rejected this position, calling for an increase to the JobSeeker, Youth Allowance and Parenting Payment rates.

The list of recommendations targeted the need for a thorough review of the income support system in Australia and its link to poverty.

The recommendations also raised concerns that current settings are acting as a barrier to people accessing employment and housing.

This included impacts on job-seekers, students, those with a disability, First Nations people, those from culturally diverse backgrounds and people living in regional and remote areas.

The report referred to testimony from those on unemployment benefits about how an increase would help them leave behind destitution.

“I would not have to spend all my time wondering how I will live through the next fortnight,” one recipient told the committee.

Another said: “I’d no longer be just surviving or even barely existing. I could afford to live.”

The report made no conclusion on the amount that Newstart and related payments should be increased by.

However, it did refer to Parliamentary Budget Office figures that said a fortnightly income of at least $1012 was required to ensure support recipients do not live below measures of poverty defined by the OECD.

The rate of Newstart was set at a rate of $559 per fortnight for a single person without dependants before the coronavirus outbreak took hold.

Greens Senator Rachel Siewert has campaigned for an increase in the rate of Newstart. Source: AAP

The payment has barely budged in real terms since 1994, despite a coalition of community organisations, businesses and economists advocating for it to be lifted.

Among those to the support the move include former prime minster John Howard, while Tony Abbott has also argued it would be difficult to reverse increases made to payments during the pandemic.

The Australian Council of Social Service told the committee an increase to Newstart would be the “single-most effective” means of reducing poverty in Australia.

It has advocated for the rate to be increased by a minimum of $95 a day.

You did it! Senate inquiry recommends permanent increase to Newstart!

Thank you to all of you who have shared your story and campaigned for change. https://t.co/MaLsWmDiRJ#RaisetheRate #auspol #RaisetheRateForGood #Newstart pic.twitter.com/a27IduJQsd

The committee heard an overwhelming majority of witnesses supported an immediate raise to Newstart and other income payments for economic and social reasons.

It also heard how low rates of income support had meant victims of domestic and family violence were unable to leave a violent relationship on a number of occasions.

First Nations people were also found to have a “significantly higher” rate of unemployment than the rest of the population and to be more likely to be penalised for failing to meet job seeking responsibilities.

The number of people on JobSeeker rose by about 500,000 from February to April, with another 400,000 expected to apply by September.

The committee’s report noted that the “impacts of the pandemic on people's social and professional lives have been unprecedented and are still unfolding”.